There are precious few undammed rivers in America. Fewer still where you can float for days without seeing another party.... 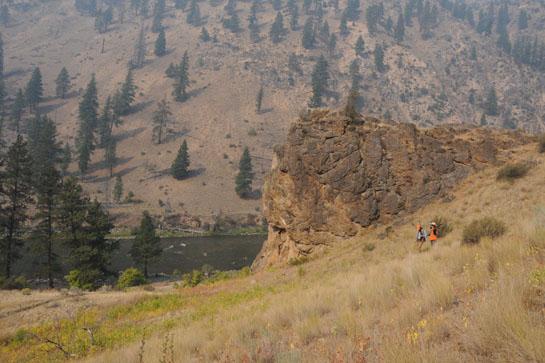 There are precious few undammed rivers in America. Fewer still where you can float for days without seeing another party. And almost none where the trout are as hungry and the upland birds are as accessible as on Idaho’s Middle Fork Salmon River. I spent a week on the wilderness river last fall, casting to colorful cutthroats and hiking the canyon walls for chukar partridge.

It’s not easy getting to the Middle Fork. You can drive a long, rough gravel road for hours, but in the late season you might have to walk your raft miles downstream to find water high enough to float. Or you can fly to the put-in point. We opted to go by air, skirting active forest fires on the flight from Boise. We wouldn’t know for the next three days how close the fires would burn to our take-out near the Middle Fork’s confluence with the main Salmon River. Or how complicated our extraction from the wilderness might be.

The landing strip at Indian Creek puts a premium on pilots’ knowledge of terrain, thermals, and temperature. I was happy to be on the ground, and ready to trade aluminum wings for a rubber raft.

We would be floating and fishing with Far and Away Adventures, based in Sun Valley, Idaho (far-away.com). This is one of several outfitters who float the Middle Fork, but they have a reputation for great staff, gourmet food, and solid gear. Here, the tender ship shoves off to float down to our first night’s campsite.

Dan Schroeder, the captain of my boat, knows a thing or two about hospitality. He greeted me at camp with cold drinks after I strung up a fly rod and dabbled with the first of hundreds of westslope cutthroats.

I love fly fishing at the end of the summer and beginning of fall. The trout are scrappy, numerous, and their colorations stunning. They’re also hungry and looking for easy calories. Grasshoppers are getting dazed from the cool evenings. Put those two trends together, and you can have an epic day twitching big, high-riding grasshopper imitations in holding water. I had great success with this foam hopper.

I’m a big believer in the hopper-and-dropper technique of fly fishing. Under my high-floating grasshopper pattern, I tie 20 inches of line and then tie on a bead-head nymph. The hopper attracts plenty of action, but it’s often the nymph the catches the trout.

But there’s bigger game in the Middle Fork than cutthroats. Here, Nick Brosnan, one of the hosts of the trip, rigs up for predatory fish. The river’s larger cutts and the even-bigger bull trout don’t care as much for insects as they do flesh. Nick tied this red-eyed streamer to appeal to the river’s carnivores.

The second day of the trip was mainly about the other half of the cast-and-blast adventure. We’d climb the canyon walls in pursuit of chukar partridge. One constant of the mid-morning, though, was watching the supply raft negotiate the rapids and drops of the river as it made its way to the evening take-out.

If there’s anything that will take me away from fly fishing, it’s wingshooting. Schroeder and Ryan Krogh from Outside Magazine uncase the Beretta shotguns we’ll carry for chukars.

For a bird smaller than a bantam chicken, chukars can make a fool of hunters. John Le Coq of Fishpond, another of the trip’s sponsors, sidehills toward a covey of partridge that we located by their incessant chirping. But just before we got in shotgun range, the birds set their wings and flew across the river. It would take us hours to reach the same elevation, so we simply retained our elevation and spooked up another covey.

Hunting wild chukar on the Middle Fork is equal parts mountaineering, gymnastics, and big-game hunting. We managed to scratch out partial limits of the birds–native to the Himalayan foothills–each day, but far more birds flushed safely out of range.

One productive way to hunt chukars in this vertical country is to wait for the birds to fetch a drink from the river, then flush them in the streamside vegetation. But you have to be quicker than we were in order for it to work. By the time we had beached and tied off the boat and gathered our shotguns, the birds were flying up to the higher cliffs where they spend their days.

We weren’t the only folks enjoying the river. Just outside our final campsite, we found the print of a large black bear that had done some visiting overnight.

In our last day’s float, Schroeder and I took a brief side hike to a jumble of rocks overlooking the river. There, we found evidence of previous river dwellers. The Middle Fork was the homeland of the Bannock Indians, the ram-hunting “sheepeaters” who occupied much of the Great Basin.

As a fellow ram hunter, I appreciated the animation of this art. I get just as excited when I see a bighorn.

This is the Flying B Ranch, one of the most historic wilderness habitations in the West. It’s a working ranch, where nearly everything–food, fuel, equipment–has to be either floated or flown in. It’s here that we expected to meet the airplane that would fly us back to Boise. But the smoke from the surrounding fires was so thick that planes were landed. For hours, it appeared that we might have to spend the season either helping the Flying B put up hay or fishing for our suppers.

But finally, a couple of pilots took advantage of a brief break in the ceiling and flew in to fetch us. It was a bittersweet departure. I could have stayed in that big, wild country for a few more days.