Warning: The following contains place names that will be unpronounceable to most readers. In fact, the author can’t pronounce them.... 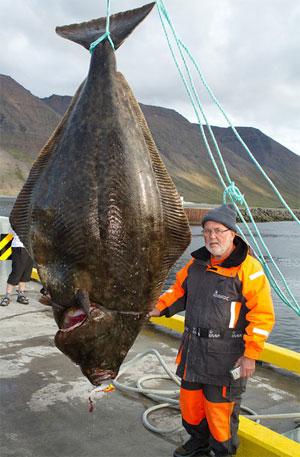 Warning: The following contains place names that will be unpronounceable to most readers. In fact, the author can’t pronounce them.

It was confirmed this week that a halibut caught by German angler Gunther Hansel off Bolungarvik in the West Fjords of Iceland in August is officially the largest halibut ever caught by a sea angler.

Hansel’s monster measured 2.5 meters (about 8.2 feet) and weighed almost 220 kilos (about 485 pounds). The previous record holders were Bosse Carlsson and Hans-Olov Nilsson, who took their 210 kilo (around 462 pounds) halibut off the coast of Norway in 2009.

The 70-year-old Hansel reportedly battled his catch for some two hours before bringing it on board with the help of five other men.

At the time, most of the crew of the chartered Jasmine ÍS-431 believed the fish to be the biggest taken in Iceland waters if not the world but their suspicion went unverified until this week. Hansel sold his catch for more than ISK 450,000 (USD 3,900) upon hitting the dock. He split the money with his friends on the boat.

Would you share your payout with your friends on the boat? Can you say Bolungarvik? I can’t. Comment below.