After 37 years, Walter Hill finally has his buck. The 81-year-old hunter from Louisiana went legally blind in 1975 after... 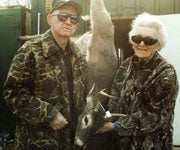 After 37 years, Walter Hill finally has his buck. The 81-year-old hunter from Louisiana went legally blind in 1975 after being involved in an ammonia spill at work.

So how does a virtually blind hunter shoot a deer? With the assistance of one of his friends and a laser scope, Hill was able to shoot his buck at 60 yards with a .308. Hunters in Louisiana with vision worse than 20/400 are allowed to laser scopes thanks to a new law, HB 39.
Sixteen states have laws in the books that allow visually impaired hunters to use laser scopes (they also have to be aided by a sighted hunter).

“Walter will be 82 years old in three months and hopes he can ‘see’ and shoot a bigger buck next time,” his wife Margaret Hill told the Shreveport Times. “Bucks or does, he’s still having the time of his life getting back in the woods again to hunt.”