Can You Really Stalk Within Bow Range of a Mature Whitetail Buck?

A veteran bowhunter on how to spot and stalk western whitetails 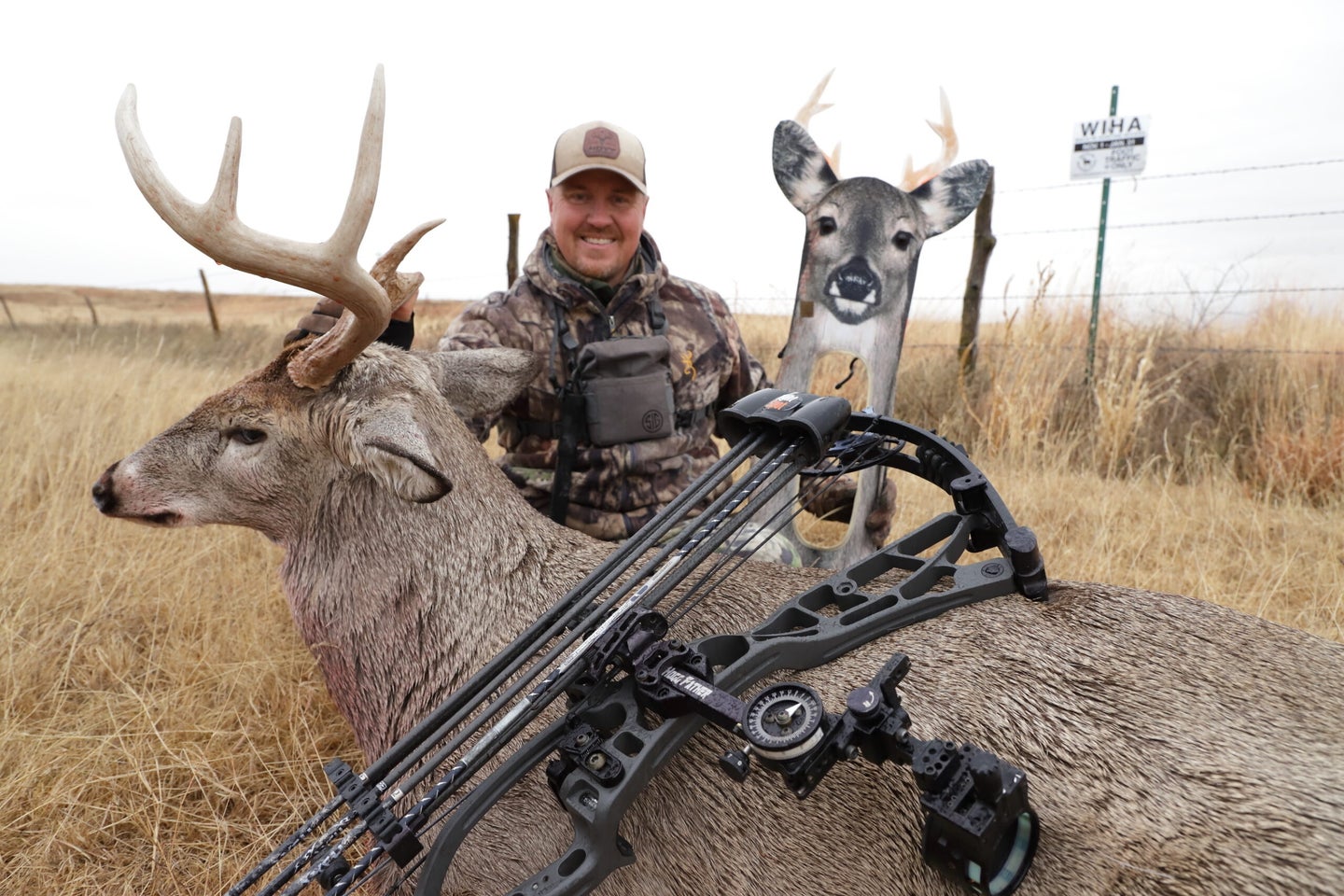 Hunting whitetails in the West is a different game than if you’re pursuing bucks in the Midwest or East. We have expansive tracts of land out here, which makes it both difficult and overwhelming to pattern deer if you are a newbie. I’ve had the most success finding whitetails by glassing and then making a stalk.

If you are used to hunting from a deer stand or permanent blind, this may seem like a foreign concept. But the way I hunt —at least to start—is more similar to the traditional way of hunting whitetails from an elevated stand than you might expect. My method for killing mature western bucks is to spot them from a stand and then make my move. If you’re headed out West to hunt whitetails this year, here’s how to get within bow range.

Hang a Deer Stand to Glass

The West is vast. Aside from a few river bottom areas, you won’t find massive tracts of hardwoods like in midwestern and eastern states. Western whitetails have adapted to open landscapes and inhabit sparsely-timbered creeks, sage-dappled plains, and cedar-choked canyons. They move great distances in search of does during the rut, and a mobile approach is often the right choice.

Use a digital mapping app like HuntStand or onX to locate trees that will allow you to hang a stand, get elevated, and glass lots of ground. Pay attention to deer sign when walking to and from your stand, but remember, this isn’t a kill stand. It’s for observation. Don’t get bummed if the area isn’t littered with deer tracks. You’re using this stand to pinpoint bucks.

Glass From the Truck

When driving to your stand sites, stop often to glass. A huge part of hunting western whitetails is by glassing with your vehicle. Buy the best binoculars you can afford, as well as a quality spotting scope with a window mount. When I arrive at any western whitetail destination, the first thing I do is log miles in the truck. This is easy to do when driving between stand locales and looking for other prospective observation trees.

When sitting in the truck or an observation stand, pay close attention to how deer use the landscape. Typically, I spend an entire day taking note of how deer move. It won’t take long to identify a popular sage flat that ties into an old dry creek bed that leads to a willow-rich bedding area. A little pinch between cedar-dotted hills that sprawls out into a giant cactus or sage flat is also a great area to find bucks going to bed or pushing a ready-to-breed doe.

Once you identify a deer-rich area and know how the deer are using it, make your move. Few things trump the excitement of stalking a whitetail, and for some, this tactic sounds impossible for a bowhunter. Do yourself a favor and keep an open mind. Stalking a mature whitetail is possible if you stay patient and do it the right way.

If you’re able to spot a bedded buck or watch a buck bed down, don’t spring into action. Make sure the wind is right. Then, pull out your smartphone and mark your location as well as the location of the bedded buck. This will give you a visual reference to look at during the stalk. It’s also a great idea to snap a few photos of the landscape between you and the target animal. Whether you’re perched in an observation stand or watching from a hillside, things will look different when you start your stalk. Take note of a few distinguishable landmarks — a crooked fence post, massive cactus, lone tree, etc. — and then photograph those landmarks. The more visual references you have, the better your chances of getting close.

When on your stalk don’t keep popping your head up and down like a prairie dog. Trust your pre-scouting work and stay hidden. I’m also a big believer in shadows. If you run out of stalking real estate for a moment or need to make a risky move, shadows help a lot. If there are scattered clouds, wait for one to cover the sun.

Lastly, when you get in position, you have two options. First, grunt or snort-wheeze to get the buck to stand. Second, wait for the buck to stand on his own. When stalking, I prefer the second option. Yes, it may be a very long wait, but what does that matter in the grand scheme of things? You’ve done everything right. Don’t rush it.

Use a Bow-Mounted Decoy

My favorite western whitetail tactic is to use a bow-mounted decoy. The technique is simple. Place a quality 3-D buck decoy in an open to semi-open area. You want rutting bucks to be able to see the decoy from a distance. With the fake set, attach either a Stalker Doe from Ultimate Predator Gear or a Whitetail Doe Decoy from Heads Up to your bow. Get 18 to 20 yards on the downwind side of your buck imposter and find some cover—sage or cedars will work. This situation simulates a buck tending a doe, and most bucks can’t resist coming in.

This is one of the most exciting ways I’ve found to hunt rutting whitetails. It’s the norm for a mature buck to approach the 3-D buck aggressively and without caution, giving you plenty of time to draw your bow and capitalize. Don’t be afraid to move a little. Remember, you are part of the decoy scheme. If a buck hangs up, reach up and flick the ear of your bow-mounted decoy or move your riser side-to-side.

On those occasions where you watch a buck take a doe to tend her, slap a pair of antlers on your bow-mounted decoy, and use the terrain to close the distance. Bucks don’t take kindly to other bucks wandering into their rut party. If you can get close — knee pads and leather gloves are a good idea — you have a great chance of killing the buck.

I like to get within 50 or 60 yards of the bedded pair and then grunt loudly. Often, a single grunt is enough to get the buck to stand and see the bow-mounted decoy. Stay patient. I’ve had bucks react instantly, while others will paw the earth, or hook vegetation with their horns and toss it into the air. If a buck does this but refuses to budge, grunt again and this time, add a snort-wheeze.