Freddy Krueger Bucks: The Deer That Haunt Our Nightmares

Fear, panic, and dread are all part of a good haunting in the whitetail woods 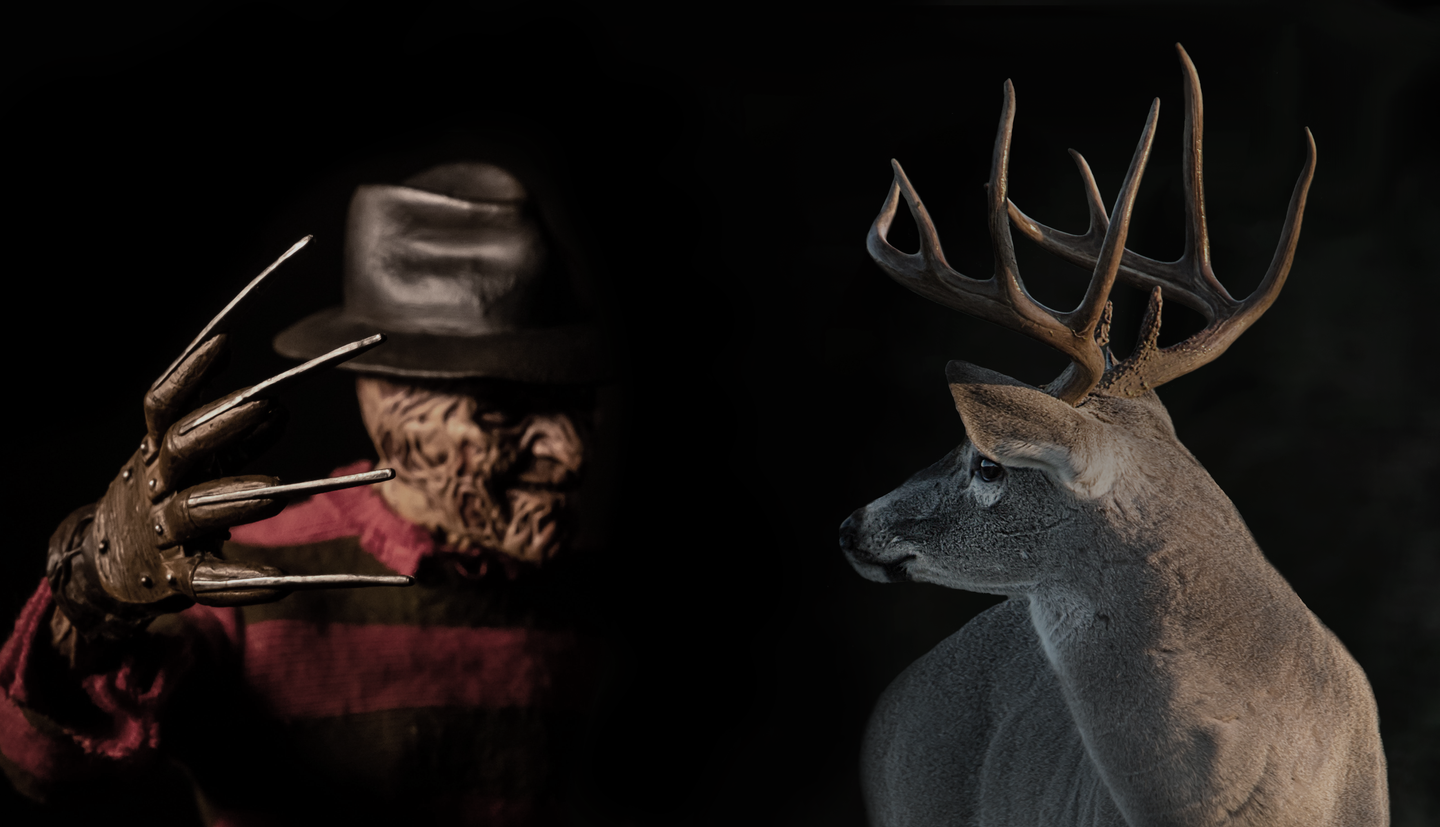 The stuff that nightmares are made of. Unsplash (Freddy Krueger); John Hafner (whitetail); photo illustration by Natalie Krebs
SHARE

When I first started working for Outdoor Life as a young, junior editor, I had a recurring nightmare that went like this: I’m sitting in a ground blind with my new boss (the editor-in-chief). A buck materializes out of the woods. He has an impressive rack, but a small body—an absurdly small body. He’s the size of Boston terrier. The editor-in-chief sees nothing strange about this and whispers to me, “Shoot him.” So, I draw my bow and shoot…and miss the tiny Booner buck. But following close behind this dwarf buck is another mini buck, so I nock another arrow—and miss that one too. These miniature bucks keep coming and I keep shooting—and keep missing. Somehow my quiver has endless arrows and the editor-in-chief sitting next to me has a limitless capacity for disappointment.

The thing is, this nightmare is based on a true story. Or at least a combination of a few true stories. Hunt whitetails long enough and you’ll miss a big one. Some of these misses can be explained by logic: a tree branch deflected the arrow; it was a tough shot on a moving deer; the damn buck jumped the string. Other misses have no logical explanation whatsoever. They happen because adrenaline and panic overcome rationale thinking and highjack our motor skills. These misses happen because of buck fever. If you miss a big buck in this fashion, it will haunt you forever. These are four buck stories that still haunt our dreams—no, nightmares—to this very day.  —Alex Robinson

Nowadays, when you live three hours from your hunting camp, trail cameras help keep tabs on deer movement. Prior to that, you had hunting buddies who kept an eye on things for you. For me, that was Tommy Cormier. You’ve never heard of him, but he was the best deer hunter I’ve ever known. He basically lived in the woods from October until January. When he saw noteworthy bucks, he’d call to give me the scoop.

“So, here’s how this needs to go,” he told me one day. “Next week is opening day. I’m going to tell you where to sit, how long to sit, where to look, and what you’re looking for. Well, he’s a perfect 10-point with double drop tines. That makes him a 12. He’s wide, has incredible mass, and is just a stud that really likes apples. I’ve never seen a better deer.”

I, of course, didn’t believe him. Dutifully, though, on opening day I parked myself at the base of the snowy tree that Cormier described. By 5:30 a.m., I was comfortably in place. Shotgun barks seemed to come from all directions until they subsided around noon time. Chilled, but mostly bored, I decided to take a walk. I slung my Mossberg 835 12-gauge over my shoulder and slowly began a stillhunt.

I took 10 steps (I know because I counted and recall each one) before catching a flash of movement to my left. It was a nanny (mature) doe running right toward me. I had an antlerless deer permit, raised my shotgun, and snicked off the safety. Behind her, though, was another flash of movement. Just before pulling the trigger on the doe, I saw antlers—a giant set of antlers. It was the double-drop 12-pointer and he was awe-inspiring. A giant if there ever was one.

My first shot was an open 60-yarder. Clean miss. No excuse. The two deer paid no attention whatever and continued to run at me rather than running away. By the time the buck had closed to 40 yards, I’d fired all my slugs and gingerly reloaded. With my final round, I fired at the buck as he was standing-still buck at 25! He ran off with no indication whatsoever that he’d been hit. I watched, listened, and then puked for 15 minutes.

With as many hunters that were in the woods, I was relatively certain that someone else would have run into that giant buck.

With a light skiff of snow on the ground, I felt certain that at some point during my follow-up I’d find a speck of blood. Nothing.

So where did the double-drop 12-pointer get off to? I never saw nor heard of him again. No dead-head, no sheds, no other sightings of him exist, except for in an occasional nightmare. —Gerry Bethge

I don’t remember shaking at the shot, though I must have. I do know the buck came in on the same trail the deer always do. I heard him first, then saw him. He dipped behind a big oak trunk, and when I saw him again, I knew exactly who he was. We had just one trail camera photo of this deer, a distant shot on a gloomy day of an absolute giant.

Don’t look at his antlers, I thought, even as I looked at his antlers. They were hard to miss: curved and white and sweeping out to his nose and high above his head. This would be the biggest buck ever killed on our family property.

His shoulders were broad, his body dark. And he was moving fast. When he finally paused for just a moment, near enough to shoot with a bow and quartering to me, the crosshairs in my riflescope settled on the point of his shoulder. Someone shouted “NOW!” inside my head, the gun went off in my hands. The buck spun on his heels. The plot was so small and he ran so fast that by the time I jacked another round into the chamber, I got one last parting view of his antlers disappearing into timber.

That night and the next morning, I didn’t find a single speck of blood. Nothing to suggest a deer hunter had been sitting here when a shooter buck walked in front of her. Just the churned-up leaves and wet earth where the buck ran out of my reality and into my nightmares. The trail camera he’d cruised by just before I missed didn’t just whiff on one photo; the entire card was blank.

Since then, our trail cams have been plagued with problems: condensation, missed triggers, neon pink static. Perhaps they’re cursed. The deer they do manage to capture look insubstantial as they lurk on the edges of the frames, white specters against the black fields. A critter that resembles a cow with antlers has been haunting my favorite spots. It’s always in the dead of night, and each photo is too dim, too smudged, too foggy to tell much about the buck. In one, the big body is clear enough, but his antlers disappear into the gloom. Another will show, startlingly close in the corner of the photo, the curve of a familiar main beam.

But none of this is proof that the buck has returned. The only way to know for certain is to walk into the dark woods and wait to see if he’ll show himself. —Natalie Krebs

The shot looked perfect. Ok, maybe just little high. I was sitting in a ground blind alongside videographer Matt Arkins reviewing footage of my crossbow bolt disappearing into a Kansas buck—the biggest buck I’d ever shot.

The deer (an easy 165) had come in just before the close of legal shooting light. Matt had spotted him first and had gotten very, very excited. “Big buck, big buck. I’m serious,” Arkins whisper-yelled at me. “He’s coming in. He’s the one. Get ready. High double lung.”

I steadied my crossbow and found the buck in my scope. I tried to flick on the reticle illumination, but realized the batteries were dead. No matter, I could still see my 40-yard holdover just clearly enough against the buck’s profile. He came to what I thought was about 45 yards. Through the falling darkness, his body started to blend in with the tall grass behind him. No matter, I could still see his backline. Just drop the 40-yard holdover a tad below his backline and squeeze, and…SCHWHICK. The crossbow fired. The buck kicked and disappeared into the grass.

Matt and I celebrated. We called one of our hunting buddies to share the news—we’d done it. Unfortunately, premature celebration and relief is part of any true nightmare. As we played back the shot on Matt’s camera we noticed my arrow had hit a little high. We waited a bit and then went to look for blood. We paced off the shot distance and discovered he was just inside 40 yards, not just outside 40 yards. We found decent blood to start, but then the trail evaporated. The dread began to sink in.

The next day we grid searched. We called in a blood tracking dog. We even got a ride in a plane to fly over the area. It turns out that I, in fact, had not killed the biggest buck of my life. I’d wounded him.

Three days later I got a text from Matt with a trail camera picture of the buck, alive and well, heading to a feeder—though he had a scar on his back over an area that bowhunters like to call no man’s land. “He’s still out there,” Arkins said. All I could think to reply was: “Yes. Yes he is.” —A.R.

I was home from college on Thanksgiving break with the goal of filling my Connecticut shotgun tag. I grabbed the Remington 870 youth model that I had outgrown five years prior, a couple slugs, and my blaze orange. I had access to a piece of private land where I set up on the edge of a field that was about 200 yards wide—way too far for me to shoot with my open-sighted slug gun. But at the time, I was an inexperienced hunter who thought sitting field edges was the way to go. In that magic last hour of daylight, I caught movement across the field. With my naked eye, I could tell it was a buck—a big one.

Before I continue with the story, you need to know a little background. I had spent many frustrating seasons trying to kill a deer on my own and had yet to be successful. Killing this buck would be a turning point for me. I could feel the magnitude of the moment.

The question was, how would I get close enough for a shot? Well, after the buck was done working the scrape, he moved left behind a rise in the field. The rise was maybe 15 feet in elevation, but enough to completely hide him. I jumped up and sprinted—while keeping my head low—to the base of that rise and began creeping toward the crest. As I popped over the top, the buck was standing broadside 50 yards away. We looked at each other. For an instant I imagine we both felt the same bit of surprise. I leveled the shotgun and shot.

Notice I didn’t say, I leveled the shotgun, aimed, and shot. The deer bounded off, looked back at me from the edge of the woods, and kept going. No blood to be found, not a strand of hair. The only thing left in the field was a distraught college kid, pacing back and forth, muttering to himself, and suffering over what might have been. My chest tightens every time I think about that hunt. I’ve shot plenty of deer since then, and some nice bucks too, but none of them bound through my memory as often as the first big buck that I missed. —Scott Einsmann