A trapper in Melbourne, Fl. caught a 400-pound wild hog Friday, after a week-long hunt with a three-man team and... 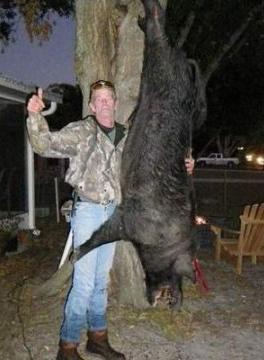 A trapper in Melbourne, Fl. caught a 400-pound wild hog Friday, after a week-long hunt with a three-man team and dogs.

The hog weighed about four times more than Florida’s average feral swine, and the trapper, named James Dean, told ClickOrlando it was the biggest hog he’s ever seen.

Just one day after catching the 400-pounder, Dean added a 250-pound pig to his collection. Dean says he’s caught 31 hogs in the Suntree area in the past month, and about 600 wild hogs total last year.

That number, he says, is hundreds more than he trapped in 2010. Dean, the owner of AAA Wildlife Removal in Melbourne, said that he believes the overpopulation problem is worsening, leading to landscaping damage that might cost thousands of dollars to repair. A January 2011 Smithsonian article estimates between two and six million wild hogs are causing damage in 39 states and four Canadian provinces, especially by “rooting” up the soil as they search for food.

In Florida, wild pig hunting is open throughout the year, without a hunting license, on private property with the landowner’s permission.