New Jersey’s controversial bear hunt has given Garden State hunters a crack at some humongous bruins. The bear pictured here... 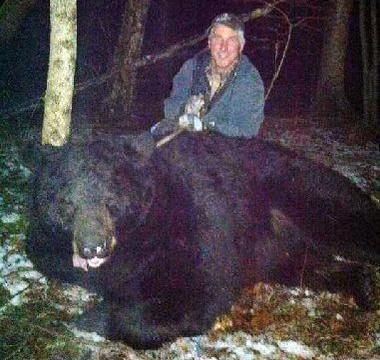 New Jersey’s controversial bear hunt has given Garden State hunters a crack at some humongous bruins. The bear pictured here was taken by John Noon last week Thursday and weighed 776 pounds setting a new state record. It took six hours and 11 people to get the bear out of the woods, according to NJ.com.

But Noon’s record only lasted for 24 hours. On Friday another New Jersey hunter named Bruce Headley took an 829-pound bear.

Noon wasn’t too beat up about missing the state record: “I can tell you that 20 years ago, I never saw a bear in the woods. Now, I would say I see them more than I see deer or squirrel,” he told NJ.com “And when you have 800-pound bears — bigger than Alaskan grizzly bears — roaming around, and you have an overpopulation of large-size bears in residential areas, that needs to be managed.”

New Jersey has an estimated 3,400 black bears and as of Saturday, 464 bears were registered by hunters. Last year, hunters took 592 bears in New Jersey.