The Wisconsin DNR released a report yesterday, announcing that a cougar had been caught on camera during its evening stroll... 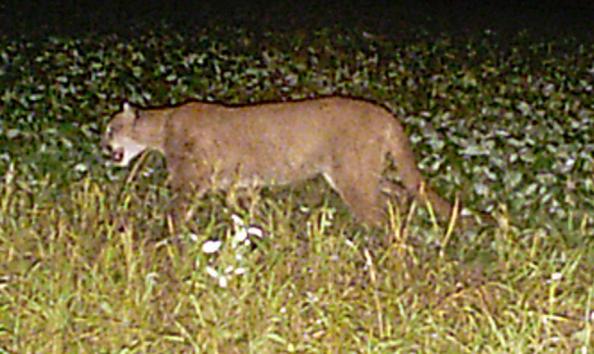 The Wisconsin DNR released a report yesterday, announcing that a cougar had been caught on camera during its evening stroll in Buffalo County. Though cougar tracks were confirmed in the area of the sighting, the hard soil made it impossible to trail the animal.

Since 2008, there have been six other unique feline visitors to the state, according to hair, blood and scat samples taken by the DNR. Unfortunately, this feline out-foxed DNR officials, leaving no DNA sample to allow them to determine if it was a new individual.

Despite these sightings, the Wisconsin DNR press release stated, “There is currently no evidence that cougars are breeding in Wisconsin. Biologists believe the cougars known to have entered Wisconsin are male cougars dispersing from a breeding population in the Black Hills of South Dakota.”

(Check out other Wisconsin cougar sightings!)

Three of these six were officially confirmed to have left the state, one of which turned up after being hit by a car in Connecticut. That’s right, Connecticut.

In Wisconsin cougars are protected and may only be shot if attacking humans or livestock.

The DNR suggests “… in the extremely unlikely event that a person is confronted by a cougar, experts recommend against running. Instead, face the cougar, spread your arms and open your coat or jacket if you are wearing one to appear larger. Take hold of small children so they do not run. Yell at the cougar. If it approaches, throw rocks or sticks at it.”

If you run into any cougars in Wisconsin, the DNR asks you report them (along with any photos) through the “Rare Mammal Observation form.”

If you’ve seen any cougars anywhere else, tell us about it here!

Photo courtesy of the Wisconsin DNR.