The most exciting news to come from the waters of Great Britain doesn’t have anything to do with the London... 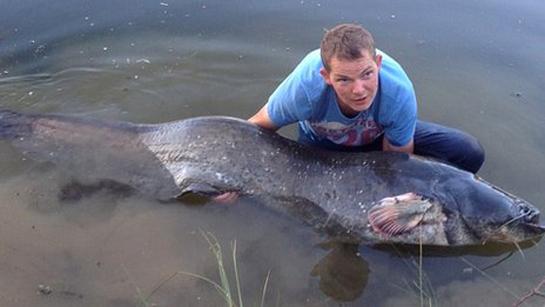 The most exciting news to come from the waters of Great Britain doesn’t have anything to do with the London Olympics. It has to do with the enormous fish caught by James Jones that may end up being the largest freshwater fish ever caught on the island.

The 31-year-old chef from Southminster was fishing Oak Lakes Fishery, Essex when something big hit his bait. Twenty years of fishing experience told Jones that what was on the other end of his line was huge so he yelled for help. Nearby anglers ran to Jones’s side to watch and assist him battle the unseen goliath for more than two hours.

There was speculation that this was the rumored, never-before-caught monster fish of the lake, and that speculation proved to be true when Jones landed the 144-pound wels catfish. Jones told the BBC, “Normally I don’t catch anything, so this was quite nice” before adding that the fish is seven inches longer than he is tall.