Bunny Huggers might not feel the same way about the small and furry of the world if they regularly park... 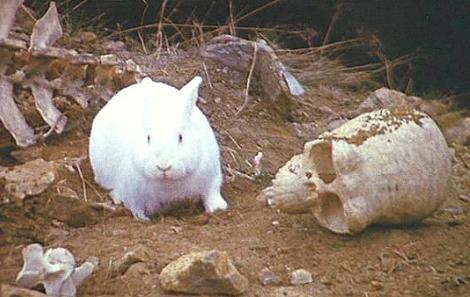 Bunny Huggers might not feel the same way about the small and furry of the world if they regularly park at the Denver International Airport.

This is because the airport parking lot has become an automotive owner’s nightmare as hundreds of rabbits have turned parked cars into their personal chew toys. CBS4 reports that the rabbits have chewed through clutch lines, brake lines, and other automotive wiring. This problem apparently began back in 1999 when some bunnies were caught chomping through the wires of de-icing equipment parked close to the airport.

In the years since, the car-munching fiends have multiplied (rabbits do that) and moved on to bigger and larger parking lots. The damage they do is expensive and, no, not covered by auto insurance.

Airport parker Ken Blum told CBS4 that recent damage set him back $700 out of pocket. “When I had trouble with the oil light coming on, the dealer told me the wires that controlled the air conditioning were chewed,” Blum said. “My insurance didn’t cover it, the manufacturer didn’t cover it.”

While airport officials say the problem isn’t quite as bad as the bunny victims make out, they did say that United States Department of Agriculture Wildlife Services agents remove rabbits when they see them.

I wonder what “remove” means?

Parking lot owners however have taken to dousing their property with coyote urine in an attempt to dissuade the rabbits from coming about.

I think I’d rather have rabbits on my property than have my parking lot smell like yote urine.

But that’s just me.

Can you think of a better way to deal with these rabbits? A few traps maybe?