Rabbit Season Is the Perfect Opportunity to Break into Traditional Bowhunting

Thinking about taking the leap from target to the field? Rabbit hunting is the best way to get started 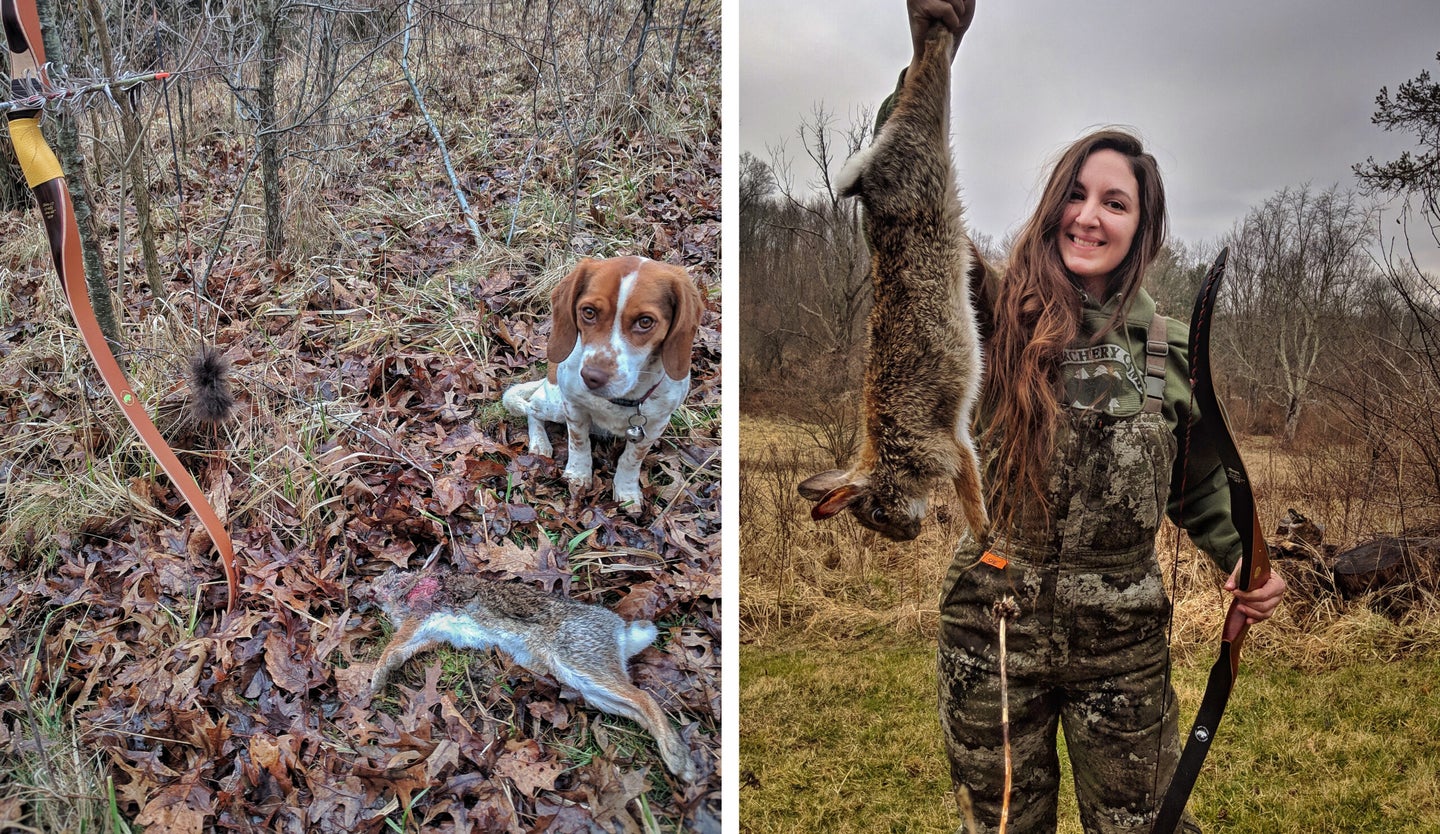 As Mother Nature drops blankets of snow across the country and the temperature plunges, deer season has come to an end for most of us. The end of deer season signals a short hiatus from the woods, and more time spent indoors and out of the elements. But rabbit season is still open. So if you’ve been wanting to try bowhunting with a traditional bow, right now is the time to get back in the woods.

It may sound a bit odd to pick up a new hobby on short notice, and in the middle of winter no less. But hear me out—because rabbit hunting and traditional bowhunting go hand in hand.

Level Up for Trad Target Shooters

Although rabbit hunting with a traditional bow is suited for bowhunters of any skill level, it’s a particularly great place to start for those who have never hunted with a traditional bow. Maybe you’ve been shooting targets and thinking about hunting, but you’re nervous about making the leap. Rabbit hunting is the perfect way to test the waters. Traditional archery is a mental game, and the quick thinking that comes with shooting rabbits helps eliminate overthinking your shot. Maybe you’re worried about wounding an animal while hunting. Wounding a rabbit is possible, but it’s unlikely. Hunting such a small, thin-skinned animal gives even new trad hunters the upper hand, as hitting any part of the animal will generally kill it. In other words, you will either have a clean miss or meat on the table.

Once of the biggest mistakes new traditional bowhunters make is purchasing a bow with a draw weight that’s too heavy for them. Yes, you want a bow that has the capability of ethically killing whatever you plan on hunting. But trying to shoot a bow that is too heavy won’t do you any favors. When it comes to bowhunting rabbits, most states typically don’t have draw weight requirements (be sure to check your state laws). That means it’s okay to start with a lighter draw weight, which means anywhere from 25 to 35 pounds. A 25-pound recurve will have no problem tumbling a rabbit in its tracks. Bows like the the Edge are perfect for beginners since you can purchase heavier limbs after you’re comfortable with your bow. These will come in handy when deer season—which usually do have minimum draw weight requirements—roll around again.

A small target may be more difficult to hit, but once you become adequate at shooting small targets, the big ones seem a bit easier. Often folks want to start hunting with a traditional bow with the goal of taking a whitetail or other big game. Yet I always encourage beginners to start with small game, as it is something that will challenge your skill set and force you to improve your shooting—with lower stakes and less expense. A bonus is that after a few weeks of rabbit hunting, you’ll become an eagle eye when it comes to picking out small movements in the brush.

Rely on Your Hand-Eye Coordination

The deep howl of my beagle let me know that she had just found a fresh rabbit trail, and I stopped to wait, watching the white tip of her tail bobbing in the blackberry thicket. I could hear the rabbit before I saw it, kicking out of the underbrush and stopping for a split-second, poised to run. Without thinking, I drew my recurve and released in one fluid motion. There was no aiming, no lining up my pin. I just let my instincts take over, and I went home with one more rabbit that afternoon.

Traditional bowhunting is all about un-learning the use of sight pins and shooting aids, and learning instead how to trust your instincts and hand-eye coordination. Rabbit hunting in particular demands that you react quickly. There’s little time to second guess yourself, and that’s what hunting with a traditional bow is all about.

Unlike deer hunting, rabbit hunting is far more laid back. You don’t have to spend a lot of time getting ready or planning your hunt. You don’t have to worry about scent, or messing up a trail, or getting to your stand at a particular time. Bring a friend, or three, if you choose. Whether you have 20 minutes to spare or several hours, you can always grab your bow and go kick some brush piles. More than likely, you’ll come back with something for the stew pot and some great stories to tell.