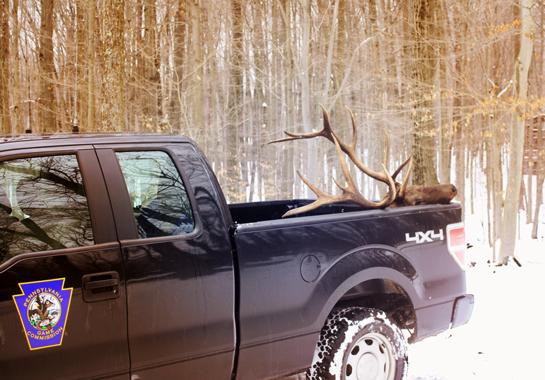 The 6X7 bull was discovered on Jan. 9 in Byrnedale, Elk County. Wildlife officials ordered tests to determine the cause of death. Results show the bull succumbed to rumen acidosis, a disease that occurs when carbohydrates such as grain or corn are suddenly introduced to an animal’s diet. Wild deer and elk are both susceptible to rumen acidosis, as are domesticated animals like cattle and sheep.

Officials say supplemental human feeding is the most likely culprit in this case. The bull died shortly after a nasty bout of winter weather, and officials suspect the responsible individuals worried wildlife might need help surviving the cold snap. It is illegal to feed elk anywhere in Pennsylvania and officials say the investigation is ongoing.

“Most times, the best way to help wildlife make it through the winter is to step back and allow the animals’ instincts to take over,” Cal DuBrock, Director of the Pennsylvania Game Commission’s Bureau of Wildlife Management, said in a press release. “In a natural setting, most wildlife will change their behaviors to adapt to colder temperatures and scarcer food supplies. Supplemental feeding can alter that behavior and have detrimental, and sometimes fatal, effects.”

The food sources of elk and deer change gradually throughout the year, and their bodies adjust accordingly. In this case, the bull suddenly overloaded on corn and couldn’t digest the new food. Its body produced too much lactic, ultimately killing the elk.

Wheat, corn and barley most often cause rumen acidosis, but other foods such as apples, grapes, bread and sugar beets can also produce this condition. A severe case typically kills an animal within 24 to 72 hours. If the animal survives the disease, it may result in a shorter life span.

Apart from causing health problems, supplemental feeding often results in a host of other issues. It can cause wild animals to loose their natural fear of humans. Animals will also gather in unnaturally large groups around feeding areas, putting them at a higher risk for predator attacks and the spread of disease.

DuBrock encourages anyone who wants to help wildlife through the winter to focus on improving the wildlife habitat on their property. Anyone convicted of illegally feeding wildlife faces hundreds of dollars in fines and court costs. Penalties typically increase when an animal dies from the feeding.