As Snow Piles Up in Northern Utah, Hungry Mule Deer Are Getting Extra Food from the State

Utah's Division of Wildlife Resources triggered an emergency feeding program in the northeastern part of the state, where high-country winter forage is buried under the snow 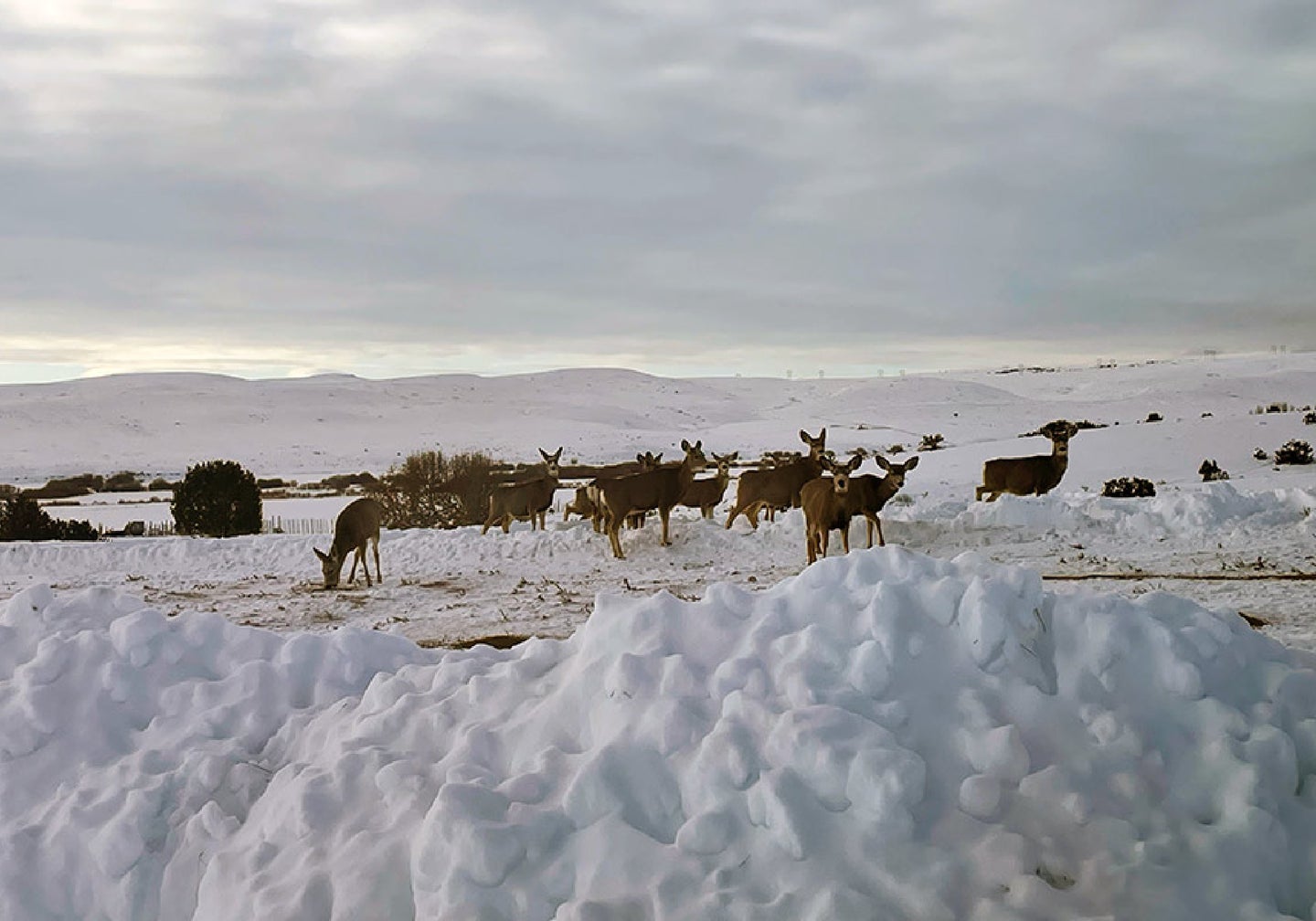 Utahns rejoice as snowfall continues to stack up across the Beehive State. Skiers and snowboarders celebrate the best conditions in 20 years. Those concerned about historic drought in the region look forward to some reprieve this spring and summer. But as the snow water equivalent (or depth of water that would cover the ground if the snow were melted) climbs 50 percent above the 30-year average, conditions in the northeastern part of the state could spell disaster for some of Utah’s grazing wildlife.

On Jan. 23, Utah’s Department of Wildlife Resources announced that it had enacted an emergency feeding program for mule deer in Rich and Summit counties. This is the first time the agency has taken this precaution since 2017.

After conducting routine health checks on big game animals in the area earlier this month, biologists had discovered lower-than-average body fat in some of the mule deer. To help these herds make it through the the winter, wildlife managers started feeding them special pellets at 11 locations in Rich County on Jan. 20. A separate feeding location will also be established in neighboring Summit County. Both counties are located on the Wyoming border and encompass some of Utah’s highest country.

How Not to Feed Deer

At the same time, DWR Northern Region wildlife manager Jim Christensen has called on the public to avoid feeding deer themselves, especially if they plan on serving hay or alfalfa.

“Deer will eat hay, but if that is their only source of feed during the winter they can have a very difficult time digesting it,” Christensen says in the press release. “We often find dead deer with stomachs filled with hay. We appreciate people wanting to help the deer, but we strongly discourage people from feeding hay or other things to deer. These are special circumstances that follow Division policies, involve trained professionals and utilize specialized feed. We still recommend that the public doesn’t feed wildlife, due to safety concerns, among other things.”

One hurdle the DWR must clear is the threat that chronic wasting disease poses at these feed sites. Because the prion disease transfers easily when deer gather to eat at a specific food source, DWR won’t feed deer in areas where they’ve recorded CWD.

This could leave healthy deer stranded in these regions without any supplemental winter forage. But “the short-term benefits of feeding do not outweigh the negative long-term consequences of spreading chronic wasting disease in a highly congregated deer population,” DWR big game coordinator Dax Mangus says.

But according to Mangus, things are actually looking up for the 2023 season. While high-elevation snowpack complicates winter survival for mule deer in Rich and Summit counties, deer in other parts of the state have experienced a rejuvenating winters so far.

Read Next: Researchers Are Now Able to Predict Mule Deer Migrations Using Habitat and Forage Rather Than GPS Collars

“Even though we are feeding in a few areas this year, it’s not a super grim picture across the state. The area where we are feeding is usual suspect where we have higher-elevation winter ranges with colder temperatures,” Mangus tells Outdoor Life. “But the other 90 percent of the state, it’s kind of a custom-order winter. In other deer winter ranges, warm storms came up from southern California. We’d have warm temperatures and rain that would melt the snow. Then the storm would turn into snow at the end as it cooled off and we’d get six inches. We don’t have those really deep snow depths.”

Mangus says these conditions might lead to a small increase in hunting permits, although he can’t promise anything yet. The target Utah mule deer population is around 400,000 individuals, but it’s currently about 24 percent lower than that. As a result, general-season buck permits, limited-entry permits, and antlerless permits all went down for the 2022 season, just like they did in 2021.

Meanwhile, Utah’s population is one of the fastest growing in the nation. As people flock there for outdoor recreation opportunities, more hunters compete for fewer tags. Mangus says the average year-over-year growth in hunters applying for all permits is five to seven percent.

“I wish we could grow the wildlife resource to keep up with that increase in demand, but there are a lot of areas where we are up against a carrying capacity or population objectives,” Mangus says. “We’ve seen some declines with the long-term drought but our wildlife populations are relatively stable. With human population growth, we see more and more demand for about the same number of permits, although it’ll go up or down a little bit depending on the years.”

“I’m no statistician or mathematician. I’m an Average Joe deer hunter who put this together on my computer in 10 minutes today. Demand is overall reasonably flat, but we are seeing decreasing resident permits, and the deer population is decreasing,” he tells Outdoor Life. “This next year of application cycles will shed more light on if we’re actually seeing an increase in applications or if we’re just past the COVID bubble of hunting interest.”

All this snow will likely work its magic to deliver a lusher warm season this year, which should then set mule deer up well for next winter, Mangus explains.

“It should help with soil moisture, spring and early summer green-up, it should really give us a boost on our summer ranges,” he says. “A lot of the research we’re doing looking at deer body condition is showing a strong correlation between healthy summer range and deer survival over winter. So when we see deer come into the winter in great shape with high body fat and high fawn weights, our deer survival seems to be much better, despite what kind of winter we have. If we have fat deer and heavy fawns, that helps us, and with this boost on our summer ranges, we’re hoping to see fat deer next fall.”