Bowhunting for Elk: Focus on the Cows

Photo by: Mark Raycroft Savvy bowhunters know that in order to score early, they need to decipher what they are... 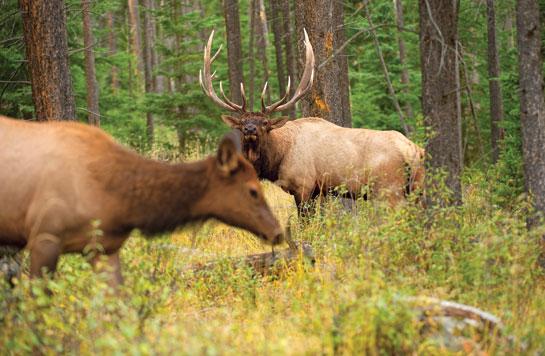 Savvy bowhunters know that in order to score early, they need to decipher what they are witnessing when glassing elk from afar. Like other ungulates, bull elk form bachelor groups and summer together in areas that provide ample feed as they bulk up for the rut and the winter ahead. And like their whitetail cousins, elk will often feed and lounge in full view of large meadows and open slopes. But getting within bow range of a bachelor herd is almost unheard of. However, if you can find a herd of late-summer cows and calves, there’s a good chance a bull is camped nearby.

During this lackadaisical period, bulls avoid direct interaction with cows, but that doesn’t mean they won’t be in the same neighborhood. This is reason number one to locate summer herds of cows and calves. Elk, regardless of sex and age, summer in the best available habitat. It’s not uncommon to watch a herd of cows and calves and then spot a bachelor herd of bulls in an adjoining meadow or canyon. Note the nursery herd location and the bulls may be close by on opening day.

Bulls Today, Gone Tomorrow
Finding bulls via traditional spotting with optics and even employing cameras on trails, at wallows, and at springs can give you confidence. But at just about the time you are ready to launch an archery attack on opening day, you might discover vacant digs despite your diligence. Bulls may fly the coop as testosterone leads them in search of procreation opportunities. This is reason number two why summer herds of cows can play an integral part in your success and why you should scout out these large nursery herds.

Summer herds of cows and calves stand out like a Wyoming cowboy in Times Square. The herd’s massive feed requirements mean it’s not uncommon to watch hundreds of females graze in the open while calves play freely. You know where they are, and any bulls in the vicinity also know exactly where the cows are. They sense any shift in movement via mountain breezes. If your sure-bull location suddenly goes arctic on you, return to the cows. They may save the day.

A large herd of cows acts like one huge enticer. Sooner or later the summer herd of cows and calves will disband, but not without bulls in tow. Diminishing summer daylight triggers bulls to begin the search for a harem of their own. Of course, this leads them in search of the nursery herds or splinter groups. Mature bulls may join a herd early or wait until a few days before the cows begin cycling in estrus. Satellite bulls and adolescents rush in early in an eager, callow fashion.

Early in September, as the large nursery herds break down, you may find several bulls moving in and out hoping to lead a group astray. This creates some tension that escalates to bugling and competition. And as the herd breaks apart, mature bulls often dive into side canyons and adjacent mountainsides to put some distance between the main herd and annoying satellite bulls.

If you’ve done your homework, you can target a bachelor group of bulls still intent on a boy’s night out. If that plan fails, then it’s time to sidle up to any cows remaining on the summer grounds. A bull will likely show up to woo the ladies and save your hunt until the real rut blows up a week or so later.