How to Make Your Own Dual-Perimeter Deer Fence

If my food plots fail it probably won’t be from a lack of rain. As this is written, southern Michigan... 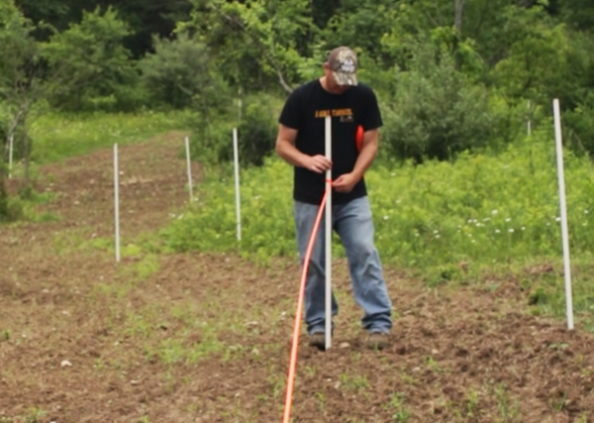 If my food plots fail it probably won’t be from a lack of rain.

As this is written, southern Michigan is “enjoying” its third straight day of rain. The timing is good even if the soggy conditions are a tad annoying for those looking to play baseball.

Two weeks or so ago, I planted about ¾ of an acre in soybeans and added another couple of acres of screening cover throughout Noah’s Farm.

The soybeans are intended to serve as a late-season food source. Thus I need to keep the deer out of them as best I can until mid- to late-November. Which is fairly easy to do if I’m willing to spend a chunk of change on a fence. But with less than $750 left of my $1,500 budget, that’s a chunk I’m not willing to part with.

I researched all manner of fencing options. The simplest seemed to be a traditional system of t-posts strung with high-tensile wire and charged with electricity. Unfortunately, there’s no access to power on the property.

Sure, I could have used a solar-charged system. Or one that ran off a rechargeable marine battery. But the battery alone would have been close to $100. The charging system a few hundred bucks more. And they aren’t exactly giving away posts and wire these days.

The next option was a commercially-made dual-perimeter fencing system specific for keeping deer out of food plots. The Hot Zone system from Non-Typical Wildlife Solutions seems to be the one attracting the most attention based on online chatter. The product includes a dual-perimeter fence system comprised of soft white fencing tape, stakes and an electric-charging system that’s powered by a 12-volt battery.

The kit covers about half an acre and retails for about $400 — minus the battery.

The concept is this: By placing a fence around the perimeter of the plot and then a second line of fencing a few feet inside of that one (thus the term “dual-perimeter), deer will be far less likely to jump the fence and enter the plot. While deer have excellent vision, they apparently aren’t great judges of depth. When they see the interior perimeter of the fence, they aren’t certain they can clear it with a single jump.

So they turn around and find another plot to pillage.

Being the thrifty (read cheap) DIYer type, I figured I could craft my own dual-perimeter fence.

I started with ¾-inch PVC pipe cut to 4-foot lengths. Each piece cost less than $2. I used 20 of them to surround my beans, and supplemented with existing trees and bushes to serve as additional anchor points.

Then I used three 600-foot rolls of orange contractor’s flagging material. This is readily available at most home supply outlets. I got mine at Menard’s for about $7 each.

I simply pounded the posts in where needed. Ran lengths of tape around each. And added waving flags every few feet after that.

I used two strands on the outer perimeter and a single strand inside. The flags are intended to increase visibility of the fence while adding motion and noise that I’m hoping will further keep deer at bay.

I stretched the tape as tight as possible without breaking it. And, honestly, that is my primary concern with this system. I’m not entirely sure that the tape will remain taut enough to serve as a barrier.

In hindsight, I’m betting that a more durable material such as yellow “Caution” tape might have performed better. If need be, I’ll swap it out and test. I can get a 1000-foot roll of Caution tape for about $8 via Amazon.

I honestly don’t know yet if this system will work, but I think it will. The principle is sound and, while it does lack the electric shock factor, it didn’t look much different than the commercial fences I’ve seen once it was completed .

And even if I do need to swap out the fence material for something a bit more stout, I’m still going to come in well under $75 for a ¾-acre plot.

And that’s going to be tough to beat. I’ll keep you posted on the results of the beans. And the fence.