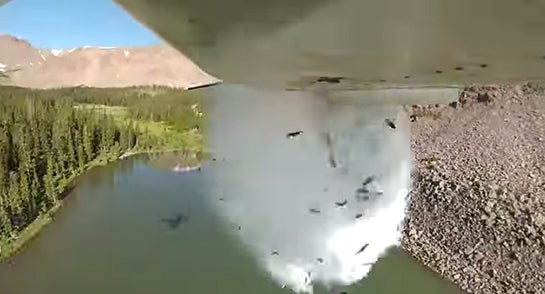 It’s raining fish in Utah. In order to restock lakes inaccessible by truck or car, wildlife officials replenish fish populations by dumping them from low-flying aircraft.

This may not be news to some, but Kamas State Fish Hatchery supervisor Ted Hallows released new GoPro footage showing the stocking process.

The planes dip to about 150 feet above the water’s surface to drop their fishy cargo, and most of the fingerlings survive the fall. Each plane can stock seven lakes on one flight, and restock a total of 40 to 60 lakes in a single day.

“They kind of flutter down, so they don’t impact very hard. They flutter with the water and they do really well,” Hallows told Fox 13 News. “In June and July we aerial stock tiger trout, a lot of brook trout, rainbow trout and splake and then in the fall we put cutthroat trout and arctic grayling in the lake.”

Although this footage has recently gone viral, the Utah Division of Wildlife Resources says the practice has been in place since 1956. New Hampshire and West Virginia also regularly employ this aerial stocking method. In the past officials would spend months hiking to backcountry lakes with milk cans full of fish. The same goal can be achieved by plane in a matter of hours.

Kind of gives new meaning to the phrase “flying fish,” doesn’t it?