Locked Up: Nearly a Third of Montana’s Private Land Is Leased to Hunting Outfitters

Why do Western hunters care so much about publicly accessible land? In part, because that’s where many species of game... 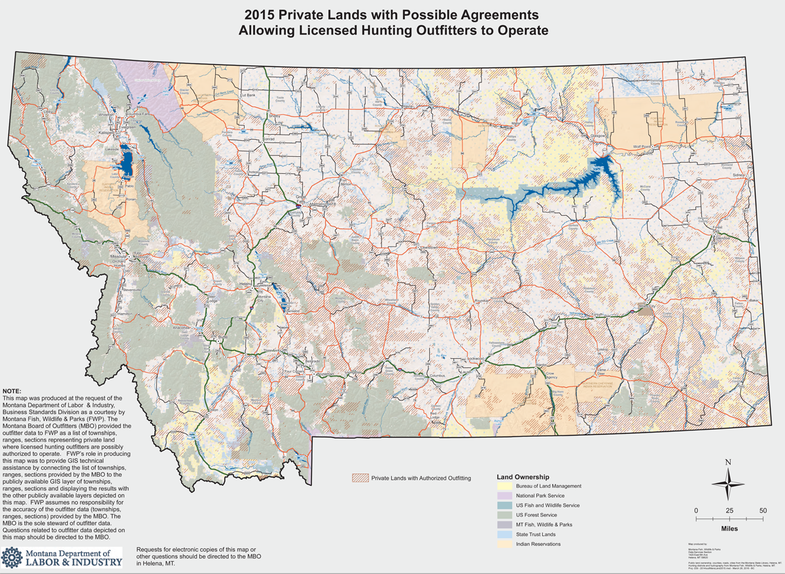 That’s nearly one-third of Montana. A third of the state’s private land is leased to hunting outfitters. When you factor private land that’s not leased—and consider that much of this remainder is urban/suburban, industrial, governed by Indian tribes, or not suitable for wildlife or hunting—then the commercial use is well over a third of the state’s privately owned ground.

And the trend is toward more leasing. A 2012 map showed closer to 7 million acres of private land under commercial lease.

The map doesn’t detail the variety of hunting that takes place on the outfitted ground. But it’s safe to assume the majority of it is leased for big-game hunting, with other acreage leased for upland bird, waterfowl, turkey, and even predator and varmint hunting.

It’s important to note that simply because the private ground is leased to a commercial outfitter, it may not be closed to all hunting. But in my experience, any outfitter who is paying for hunting rights imposes some fairly strict conditions on the type and scale of hunting that can take place on that land. Maybe blood relatives of the landowner get to hunt, but they may be restricted to certain times in the season or to a certain species of game animals.

Besides the sheer scale of private-land leasing, the map is instructive for more cultural reasons. Outfitted hunting has a long and noble tradition in Montana, but for much of the state’s history, outfitters provided gear and access to the backcountry—the classic big-game wall-tent camp grew out of this tradition. Those horse-and-tack outfitters typically operated on public land, either Forest Service or BLM land.

But it’s important to note that they didn’t exclude other sportsmen from accessing their commercial-use areas. These public-land outfitters still operate in Montana, but for the past 20 years or so, many outfitters have transitioned from being public-access enablers to promoting exclusivity. By leasing private land, these outfitters act as access agents to private land.

As the map indicates, acres where you find a licensed hunting guide are not likely to be open to non-paying hunters. And that’s a big reason why we Western hunters fight so hard to keep our public access to public land.