It’s tough to beat a kid’s first turkey, but when that bird happens to be a unique piebald, well that’s... 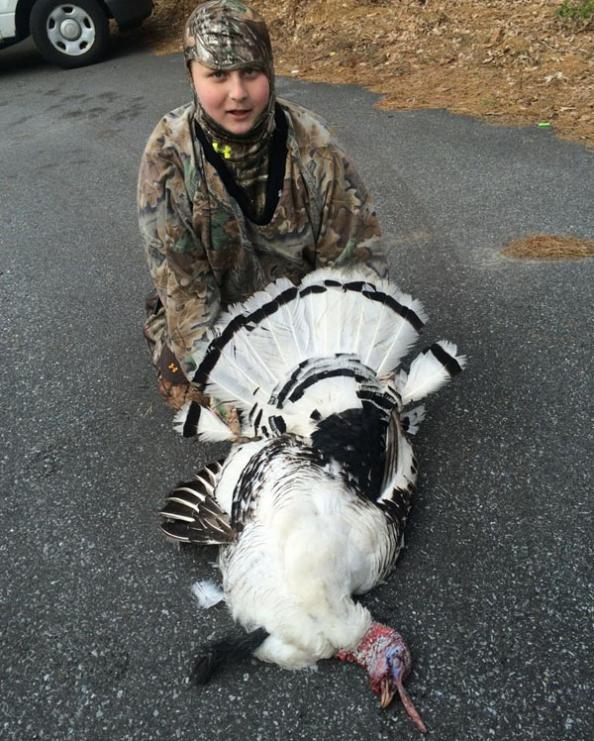 It’s tough to beat a kid’s first turkey, but when that bird happens to be a unique piebald, well that’s a story for the Strut Zone Blog.

Joseph Thorson, 12, sent us this photo and writeup after he scored on a white bird during the New Jersey Youth season. The gobbler weighed 16 pounds, had a 7.5-inch beard, and 1-inch spurs. But most notably, it’s white.

Here’s Joseph’s story in his own words…

_”When my dad and I got there the turkeys were gobbling all around us. So we got in our spot and started to call them in… The turkeys would gobble for a while and then they would stop. They stopped for about a half an hour. We kept calling for them, but we got no answer. __

Just as we were running out of hope, a loud gobble came from the woods. Then a pretty hen popped out of the woods. I got very excited but my dad told me to stay still. When the hen came a bit closer, a black and white figure came out following the hen. I said to my dad ‘Look at that beautiful white turkey, I want that one!’

My dad told me when it gets about ten yards in front of me to take the shot… It was about ten yards away now so I started to pull my gun up. I turned the safety off and looked right at the turkey’s head, and pulled the trigger. Feathers went flying everywhere.”_