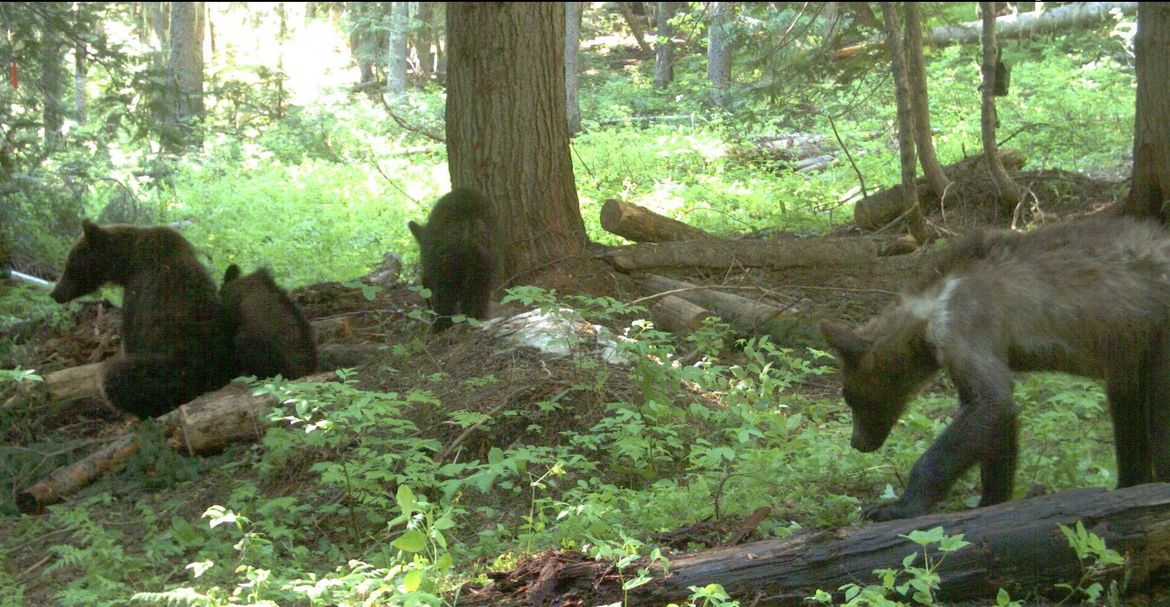 A sow grizzly was captured and radio-collared in northeast Washington. WDFW
SHARE

Federal wildlife managers captured, collared, and released a female grizzly bear that had three cubs with her in Northeast Washington on June 17. While this is the first female grizzly captured in Washington, four male bears have previously been caught in the state, the most recent in 2018, according to a press release from the Washington Department of Fish and Wildlife.

Remote cameras first recorded the bear on Forest Service land in the rugged Selkirk Mountains, prompting U.S. Fish and Wildlife Service biologists to target and trap her for GPS monitoring. When the female grizzly was captured, her cubs scattered. Biologists then checked the sow’s health (which appeared good), collared her, and released the bear unharmed. The grizzly will be tracked and monitored, along with her cubs.

“A group of bears – a mother and three cubs – were photographed on another occasion on a game camera in the same area three to four weeks prior to the capture,” Wayne Kasworm, grizzly bear biologist with USFWS. “We believe this is the same family of bears.”

The photos were taken inside the Selkirk Grizzly Bear Recovery Zone, one of six Recovery Zones identified by the USFWS grizzly recovery plan. Grizzlies in that area roam between northern Idaho, northeastern Washington, and southeastern British Columbia. The population in the Selkirk Recovery Zone is considered healthy and is growing at a rate of almost 3 percent per year. Biologists believe the recently collared female is a resident bear, and not one that arrived from outside of Washington.

“We have a population of grizzly bears, and it’s not just one that wanders in once in a while,” said Annemarie Prince, a WDFW district wildlife biologist.

Grizzlies have an estimated population of nearly 2,000 in the lower 48, and that number is growing according to most estimates. Biologists estimate there are 25,000 grizzly bears in Canada, and another 30,000 in Alaska.

While fatal grizzly bear attacks on humans are rare—averaging only one every three years in the lower 48—bear conflicts have been increasing as their numbers grow. Although outdoor recreation during the Covid-19 pandemic likely played a role in increasing human encounters with bears, 2020 was still a record year for grizzly attacks, with 13 attacks recorded in the lower 48.