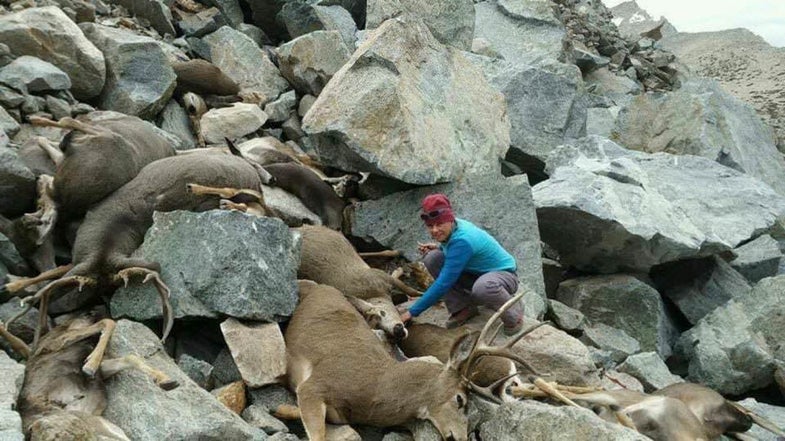 A hiker stumbled across the carnage at the bottom of Bishop Pass in November 2017. unknown
SHARE

A little more than five years ago, a herd of 122 mule deer fell to their deaths in the mountains of Central California. The pictures from that day are gruesome: dozens of dead deer strewn across a steep boulder field at the bottom of an icy chute. Some of the carcasses are contorted or splayed open. Others are pinched and piled at weird angles among the rocks.

One photo in particular shows an unnamed hiker kneeling next to a doe with a pocketknife in their hand. What that photograph doesn’t show is the hiker rock-hopping across the boulder field, mercifully slitting the throats of the mortally wounded deer. (This anecdote was shared by several users across multiple online forums.)

Mass mortality events like the one that occurred in the John Muir Wilderness aren’t all that uncommon. Every year, landslides, floods, avalanches, wildfires, and other natural disasters kill countless critters throughout North America. We’re just not always there to watch it happen.

Still, seeing the photos from 2017 resurfacing on social media makes us wonder: How often do large groups of wildlife fall to their death in the mountains? And what really happened that November in the Sierra Nevada?

Concrete information about the 2017 mass mule deer death is limited. If there ever were any official reports in national news outlets, they’re buried somewhere deep in the bowels of the internet. The California Department of Fish and Wildlife didn’t put out a press release that year, and the acting information officer for the region says he was not working for CDFW in 2017 and has no knowledge of the event.

There was, however, a story published in The Sheet, a local alt-weekly paper based in Mammoth Lakes, California. There’s also a well-reported article in the Sierra Nevada Bighorn Blog, along with a handful of informative posts in a forum dedicated to outdoor recreation in the Sierras. Pieced together, these sources give a pretty good account of what happened in early November of that year.

According to these reports, the group of mule deer was making its annual migration from their high-elevation summer range on the west side of the Sierra Crest to their winter range on the eastern side of the mountains. The deer were part of two large herds in the area: the Round Valley herd, which had an estimated population of 2,800 at that time; and the Goodale herd, which was closer to 5,500 strong. The deer were following their traditional migration route through Inyo National Forest. This route took them across a pair of notoriously dangerous stretches known as Bishop and Shepherd Passes, both of which are at elevations of around 12,000 feet.

Most of the mature bucks and does had made this trek before, but that didn’t mean they were prepared for the conditions they would face that fall. Calling the winter of 2016-17 a big snow year in the Sierras would be an understatement. It was actually the wettest winter on record at the time, according to the Weather Channel. This meant that even though the deer had waited until fall to cross the passes, there was still plenty of snow on the ground in November. And after months of high-elevation temperature swings, which create what’s known as a freeze-thaw cycle, the snowfields were coated with a bulletproof sheet of ice.

What happened next requires little imagination.

“The deer were following their migration trail and because of the heavy snow we got last year, there were big fields of it left unmelted. When it got cold it turned to ice and the deer just slipped to their death,” CDFW wildlife biologist Mike Morrison told the Sheet. “[Mule deer] are like lemmings. They could go around it, but their mama brought them that way and that’s the way they’re going. They step on the ice not recognizing it’s going to be slippery. When they get to the point where gravity takes over, it’s too late.”

In addition to being well-worn game trails, both Bishop and Shepherd passes are popular mountaineering routes. If they weren’t, CDFW officials likely never would have heard about the mass mortality event.

Lindsey Jackson is one of the hikers who witnessed the immediate aftermath at Bishop Pass. After stumbling upon the 78 dead deer that littered the bottom of the pass, Jackson notified the agency on Nov. 11. (It’s unclear if Jackson is the hiker pictured in the unattributed photograph that the Sheet published on Nov. 22.)

“When I first walked up on it, I was horrified,” she said in an interview with the Sheet.

The next day, another mountaineer called CDFW to report the dead deer they’d seen at Shepherd Pass. The agency’s investigation determined that another 44 mule deer had died at that location, making a grand total of 122 deer that fell to their deaths in both passes.

Morrison also explained to the Sheet that while these mass mortality events might not happen every year, other mass mule deer deaths have been documented before in the exact same location.

The two authors personally investigated the 1995 event after receiving a report of “numerous dead deer” at the bottom of Bishop Pass on Nov. 25. They found a total of 16 dead mule deer (12 bucks and four does) there.

“The carcasses were on a talus slope at the bottom of a steep, ice-covered hillside,” they write. “The deer apparently lost their footing on the ice, which had repeatedly thawed and frozen in the summer sun, and slid to their deaths on the sharp rocks below.”

Bleich and Pierce also mention the 1954 event, which involved approximately 26 mule deer falling to their death during their fall migration. That event was investigated by a wildlife biologist named F.L. Jones.

“Jones speculated that fresh snow, which can mask glare ice, contributed to the mortalities he reported,” they write, adding that both events followed winters with above-average snowfall. They explain that the snowpack would have been around 131 percent of the long-term mean in 1954, while it was closer to 176 percent in 1995.

Bleich and Pierce also say they were concerned about population-level impacts on the local herds after their 1995 investigation. With these concerns in mind, they brought up a trail-improvement plan with the Forest Service, which involved using hand tools and covering the trail with sand to make it safer for migrating mule deer. Their proposal was rejected.

“Permission to implement this strategy was denied by wilderness staff from the Inyo National Forest because it would conflict with ‘natural processes’ in wilderness,” they write.

Which, to be fair, is a hard truth. Nobody ever wants to stumble across a pile of 78 dead deer in the mountains. But wildlife managers know that it’s not our responsibility to prevent these things from happening. They also recognize that humans should accept the brutal side of nature, even if we aren’t always there to witness it.