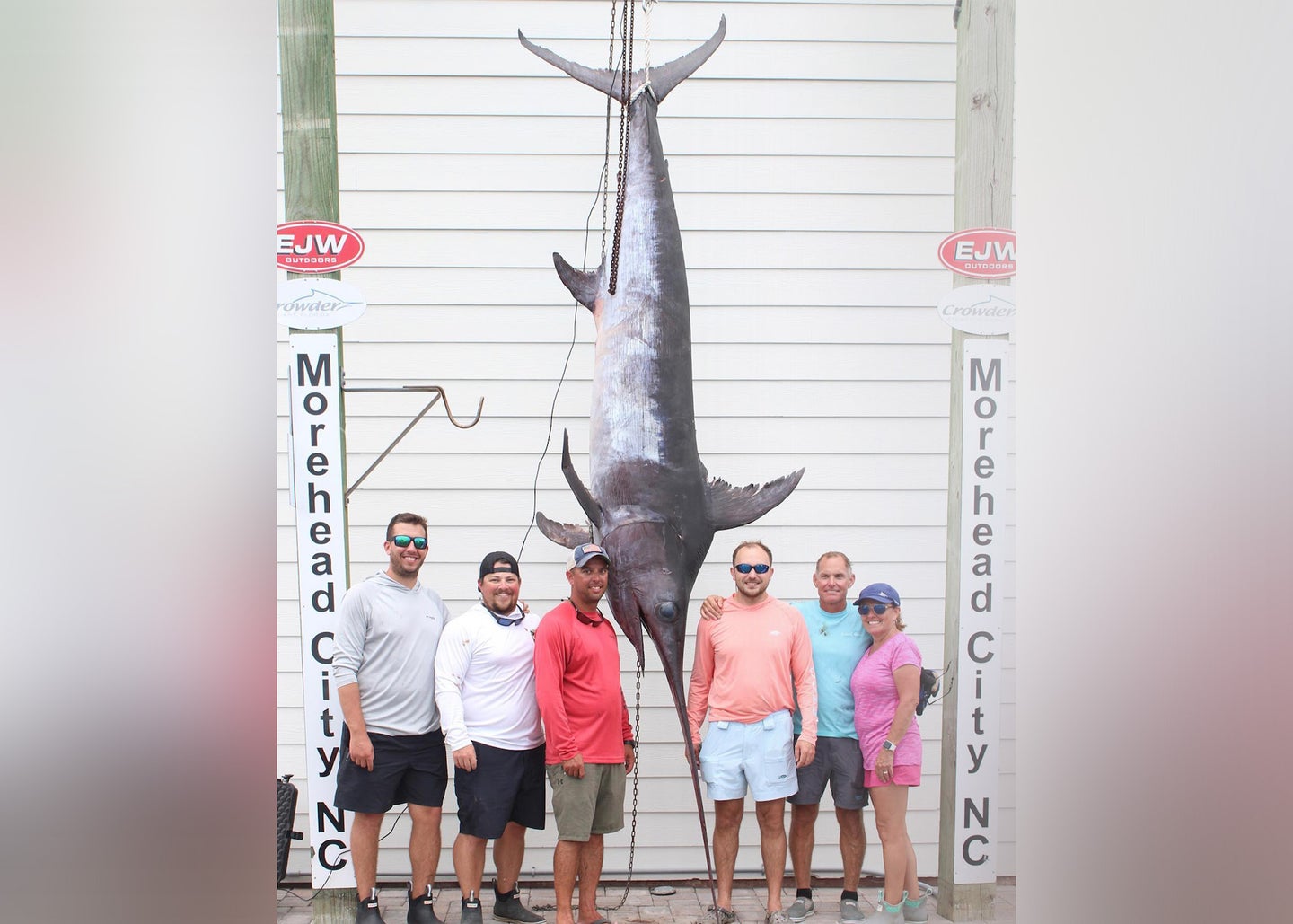 Brandon, Cary, and Shelly Carney and the boat crew are dwarfed by their record swordfish. North Carolina Department of Environmental Quality
SHARE

Cary Carney, his son Brandon, and a crew set out on Brandon’s 32-foot boat, the “Willow B,” to chase swordfish in the deep waters off the coast of Morehead City, North Carolina on Aug 21. Just a few hours into their excursion, a monster swordfish laid into the albacore belly on their 10/0 hook and 65-pound test and took off like a rocket.

The boat was rigged with electric reels but, thanks to a faulty fuse, that particular electric reel failed. So Cary leapt to the rescue and began what would turn into a 2.5-hour battle with this swordfish, which the crew was convinced was the biggest one they’d ever seen.

“The fish never jumped and after about 30 minutes, dad brought it up to about 20 feet of the surface and we could see how huge it was,” Capt. Brandon told Sport Fishing Magazine. “We got the 11-pound weight detached from the line, then the swordfish came back to life, going deeper and deeper and deeper, pulling a lot of 65-pound test line with him.”

The sword took the Willow-B for a ride, dragging it 12 miles from the initial bite scene and into 4,000 feet of water. Eventually the fish surfaced, but the next challenge became getting 504-plus pounds of meat, fin, and sword into the boat.

“It wouldn’t fit through our open tuna door, so we brought it in tail first, wedging the body against the hull,” Brandon tells Sport Fishing Magazine. “We fitted a rope around its bill, then tossed it over the T-top frame, then hoisted it into the boat. It took us about an hour of trying to figure how to get it into our Contender, and then muscling it in that way.”

They booked it back to Beaufort Inlet and the sword was forklifted out of the boat at Portside Marina. The certified scale spat out 504 pounds and 8 ounces and the body measured 104 inches from the tail fork to the lower jaw, with an additional 47 inches of sword on the front. The fish was also 53 inches in girth.

The Carney swordfish left the previous 441-pound state record in the dust once it was certified by the North Carolina Division of Marine Fisheries, even though it almost didn’t qualify. The variable that tipped in favor of the Carneys snagging the record? The broken electric reel that required Cary to hand-crank the fish in. The electric reel would have disqualified the fish for record consideration.