A New Jersey headboat catch has been certified as a state-record tilefish. It surpasses the current IGFA all-tackle world-record, too 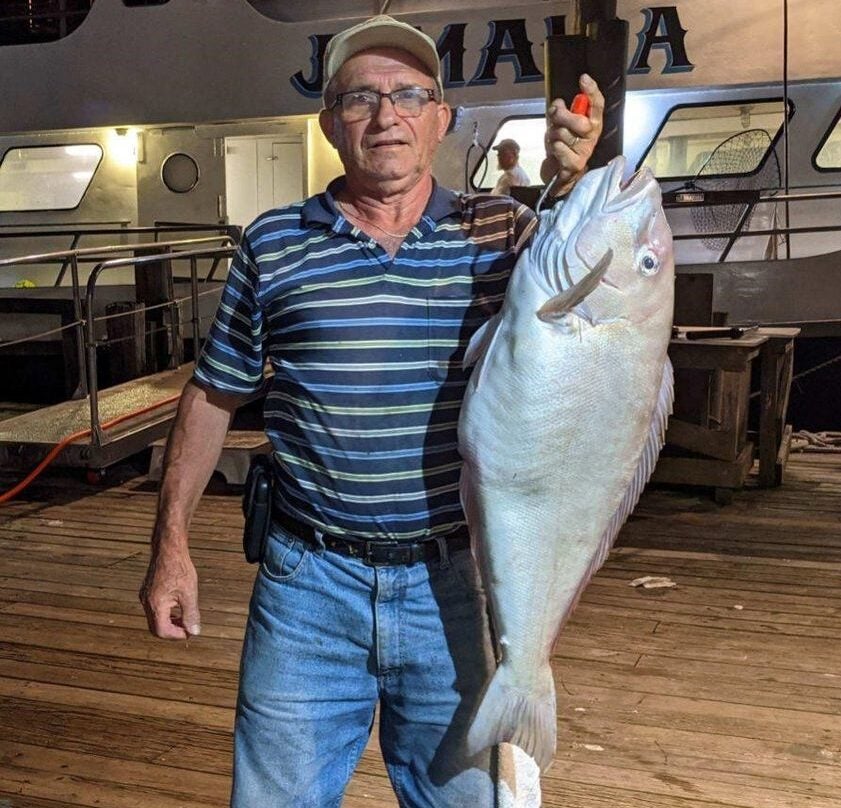 New Jersey angler George Hanakis may have set the world-record for blueline tilefish, in addition to New Jersey's state record for gray tilefish. NJDEP Division of Fish and Wildlife
SHARE

The New Jersey Division of Fish and Wildlife has certified the catch of a gray tilefish on Sept. 16 as the new state-record tilefish. The fish weighed 23 pounds 8 ounces, and was caught Sept. 1 by George Hanakis of Perth Amboy, New Jersey, while he was fishing aboard the Jamaica, which was captained by Howard Bogan, Jr. Hanakis’ fish eclipsed the prior state record by 4 ounces, according to NJDEP. The fish measured 34-inches in length, with a 25-inch girth.

He was using 100-pound test braided line and caught it in Wilmington Canyon, which is located far off the New Jersey coast. New Jersey recognizes only two species of tilefish, a deep-water marine species, for the records: the gray and the golden. The gray tilefish is recognized as the blueline tilefish by the International Game Fish Association, and by other states such as Maryland. Both monikers for tilefish are for the same species, identified by scientists as Caulolatilus microps.

This name difference and proper species identification may prove significant for Hanakis’ N.J. state record, since IGFA currently recognizes the all-tackle record for the blueline tilefish species is currently 23 pounds 4 ounces. The current world-record tilefish was caught off New Jersey by Mark Milici in May 2015.

Most state catches must go through a rigorous certification process to be recognized by the state-maintained record books. Often the paperwork and certification needed for a state record is sufficient for IGFA record status. If Hanakis enters his New Jersey record catch paperwork to IGFA as a blueline, his state-record tilefish likely could be a new all-tackle IGFA record for the species. The IGFA currently recognizes 10 species of tilefish in its records: Atlantic goldeye, Bahama, blackline, blueline, golden-eyed, great northern, red, Saito’s, sand, and southern.