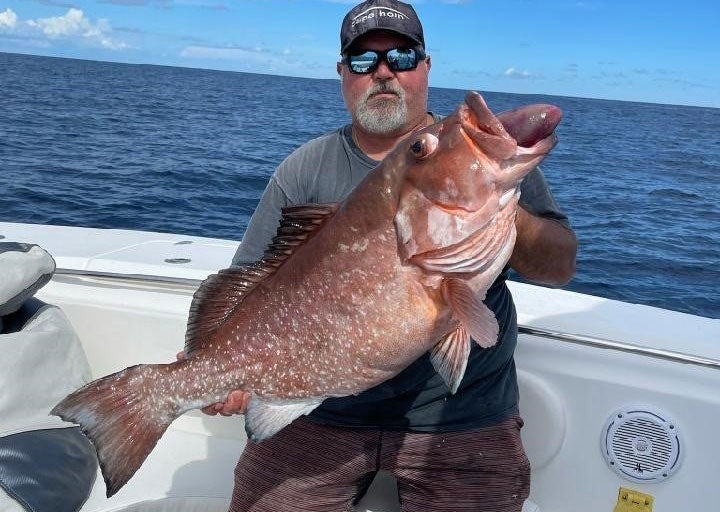 Bruce Bartlett Jr. was soaking bait about 175 feet deep off the coast of Georgia when he got a good bite from a hard-fighting fish. When he fought the fish on his boat, Bartlett realized he had something special. The red grouper he hoisted into the boat weighed 26 pounds, 6.4 ounces and measured 34.5 inches long. That weight easily shattered the Georgia red grouper record of 19 pounds, 7 ounces, set nine years ago by John Wren, according to Georgia Outdoor News.

Bartlett, 49, of Kingsland, Georgia, was fishing Oct. 4 off the coast east of Navy Tower R4 on his boat, the Fishslaya Duece. The catch was weighed on a scale certified by the Georgia Department of Agriculture and witnessed by two people who signed the record application. It was weighed at M&A Seafood Market in Kingsland. After receiving the application and reviewing it and the submitted photos, the state’s Saltwater Gamefish Records Committee approved the record. The committee is comprised of marine biologists and staff with the Georgia Department of Natural Resources. The final approval came on Oct. 15.

“This achievement recognizes not only the size of the catch, but Mr. Bartlett’s skill as an angler and the sportsmanship displayed in landing a record-setting gamefish,” Doug Haymans, director of the Georgia DNR’s Coastal Resources Division, said in a press release. Bartlett will receive a certificate signed by Georgia Gov. Brian Kemp acknowledging his record catch.

South Atlantic red grouper stocks are overfished, according to the federal NOAA Fisheries 2017 stock assessment, but are not subject to overfishing based on 2019 catch data. A rebuilding plan has been in place since 2012 for the South Atlantic stock; the Gulf of Mexico red grouper stock is not overfished or subject to overfishing. Red grouper can grow up to 50 pounds and 50 inches long, and live for almost 30 years. Red grouper are “protogynous hermaphrodites” that begin life as females, sexually mature at age 4-6, and some later transform into males between the ages of 7-15. Red grouper spawn up to 26 times per year, and they feed on fish, octopus, shrimp, lobster, mantis shrimp or whatever else is convenient and fits into their large mouths.