Marlin were the target species of these tournament anglers, but this giant tuna got all the attention 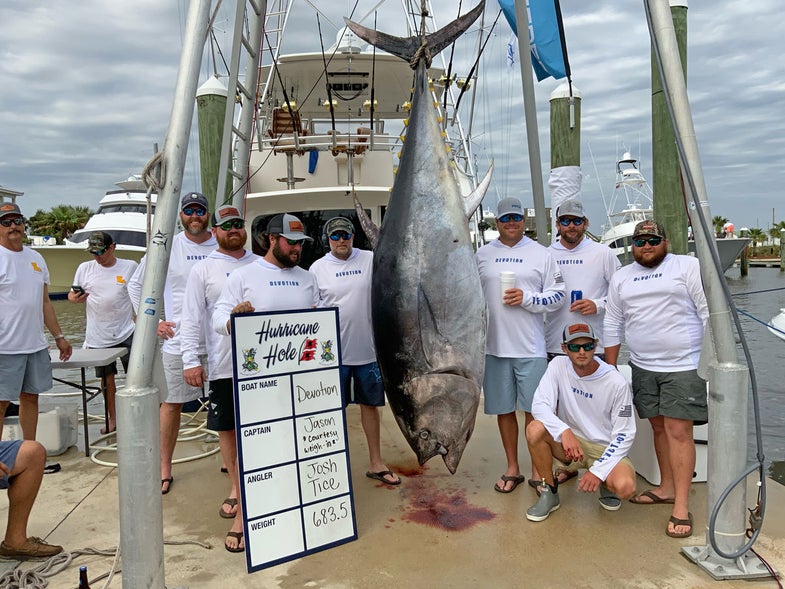 A team of anglers competing in the Louisiana Gulf Coast Billfish Classic ended up boating a massive 683.5-pound bluefin tuna offshore near Grand Isle. The eye-poping catch was weighed in at Hurricane Hole Marina earlier this month, according to a Facebook post and video.

But the tuna didn’t even win a prize, because all the marbles were for billfish—not sushi.

“Bluefin tuna don’t count in the tournament,” event director Robbie Carter told the Louisiana Sportsman. “They are weighed for the spectators, especially kids, who love it. Bluefins are absolutely enormous.”

The crew of the Devotion out of Orange Beach, Alabama, boated the big tuna. It took took angler and boat owner Josh Tice just under two hours to catch. The Devotion crew also caught four blue marlin during the three-day event, which won them the tournament. There were 65 anglers on 13 boats that caught 18 blue marlin and one white marlin, all of which were released.

The teams also caught 15 yellowfin tuna, including four each weighing over 100 pounds (one of which tipped the scales at 155 pounds). Yellowfins are far more common in the Gulf than the much larger bluefins, making the 683.5-pound behemoth bluefin all the more impressive. The Devotion team was using live bait for blue marlin, and after one tuna hit and made a blistering run, a second bluefin took a second live bait.

“We decided to go after the one that had the most line on the reel still, ” said Jason Hallmark of Destin, Florida, and the captain of Devotion. “The owner hooked it and got it in all by himself.”

Eventually, the second fish broke off.

“It was probably for the best,” Hallmark said. “Trying to deal with two of those things of that size is almost impossible, so it worked out for us.”