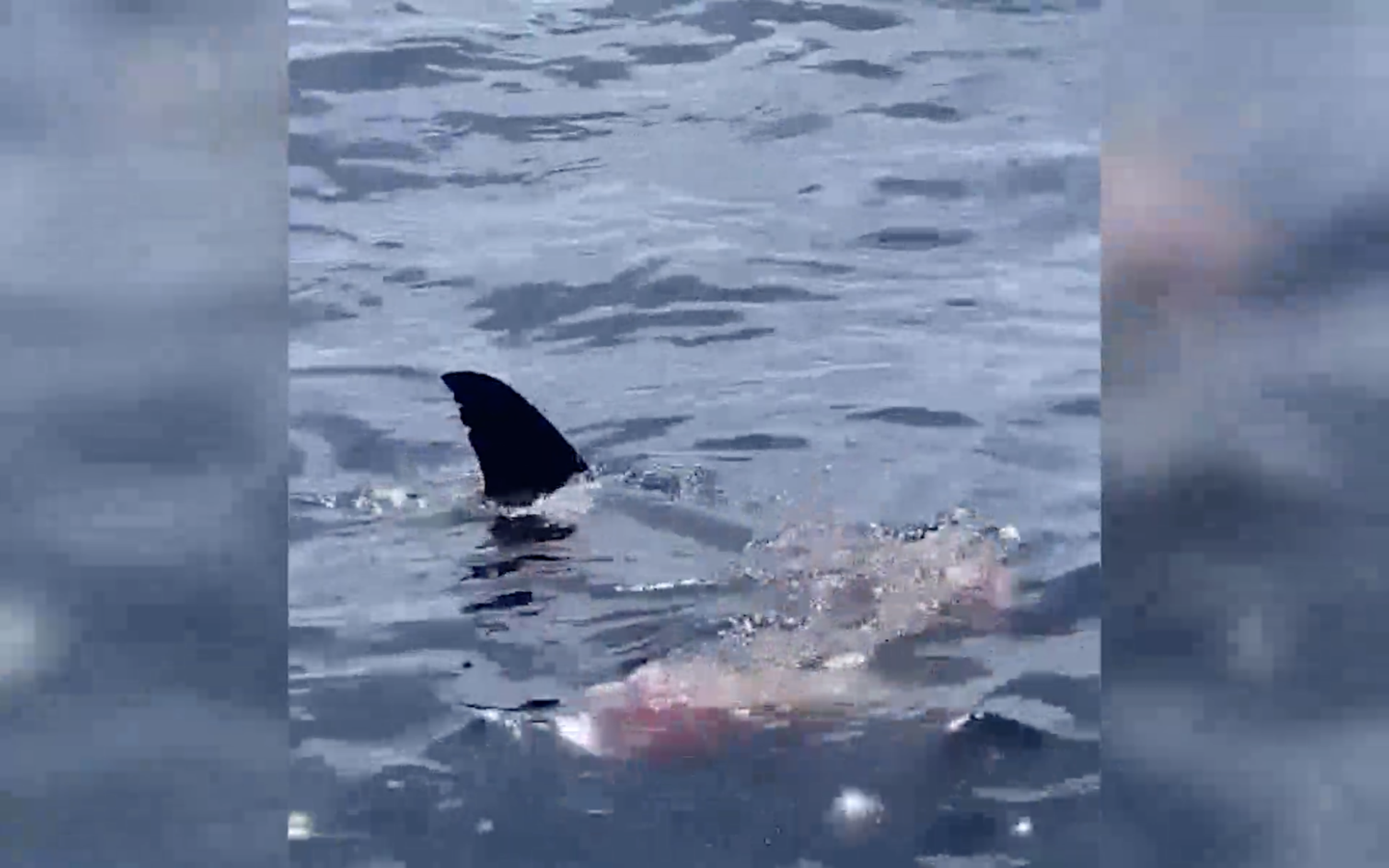 A tuna charter came across a great white shark chowing down on a large carcass off the coast of southern California. California Sport Fishing Company / NBC 7 San Diego
SHARE

Capt. Ethan Hougie was overseeing a half-day chartered fishing trip about 14 miles off the coast of Mission Beach in southern California when he noticed a billowing cloud of blood in the water. From his perch atop the “tuna tower,” he instructed the operator of the King Triton to travel over to the mess and put the boat in neutral. A large carcass bobbed in the water and a great white shark circled just underneath it, preparing to take a huge bite.

“Look at the size of that thing, dude!” Hougie exclaimed right as the shark nosed up through the water and clasped its jaws around a chunk of a sea lion.

“We got down wind from it, so all the blood was kind of coming in our direction and you could still see the sea lion. [The shark] had eaten like a quarter of it already, but the thing was still alive,” Hougie told Outdoor Life. “You could see its eyes still blinking. And the sea lion must have been like 500 pounds.”

Hougie recalled not being able to see the shark right away when he first spotted the blood and commotion through his binoculars. Then a fin popped up from just below the surface and the boat raced over to the scene.

“Then out from the shadows comes this absolute mammoth of a shark,” he said. “It barely opened its mouth and it probably took 40 or 50 pounds of meat in one little nibblet.”

The tuna crew put the boat in neutral, stayed put, and took in the incredible sight. “That was the first time I’ve really been aware of how big the jaws are of a shark,” Hougie told NBC 7 San Diego. “When we catch 200-pound tuna, it’s like you waited all day and finally here it is. If you don’t sit back and enjoy it…a 20-minute moment with that shark is going to go away pretty quick.”

There was some contention about how long the shark actually was. Hougie is convinced it was over 20 feet long based on the 35-foot boat, while California State University, Long Beach Shark Lab director Dr. Christopher Lowe claimed the shark was closer to 13 feet.

The southern California coastline has seen a remarkable increase in shark sightings over the last few years, which Lowe chalks up to state protections instituted in 1994.

“The population is recovering, and that’s a good sign,” Lowe told CBS 8 San Diego. “About 10 years ago, when we first started to see them pop up, they were primarily around Santa Monica Bay, Santa Barbara, Long Beach, Huntington Beach, and we had none off San Diego. Starting about two years ago, we started seeing juvenile white sharks down in San Diego County, and now that’s one of our biggest hotspots.”

One client on the trip, a cast member of Bravo’s “Below Deck” known as “Sustainable” Shane Coopersmith, called the encounter “the most gory thing” he’d ever seen.

“This was just full-on intestines floating…giant shark jaws had latched into the sides of the sea lion and then ripped out a bite,” he told NBC 7 San Diego. “You could see the tooth marks and where the blubber fits in between the jagged teeth. I’ve watched sea lions give birth and other amazing things in nature, but watching this great white shark eat was more beautiful than intense and scary.”

More and more great white sharks are appearing along the East Coast as well. Earlier this summer Outdoor Life interviewed several Cape Cod charter captains about their encounters, and you can read their shark tales here.