The angler was catching bait, and boated a state-record fish in the process 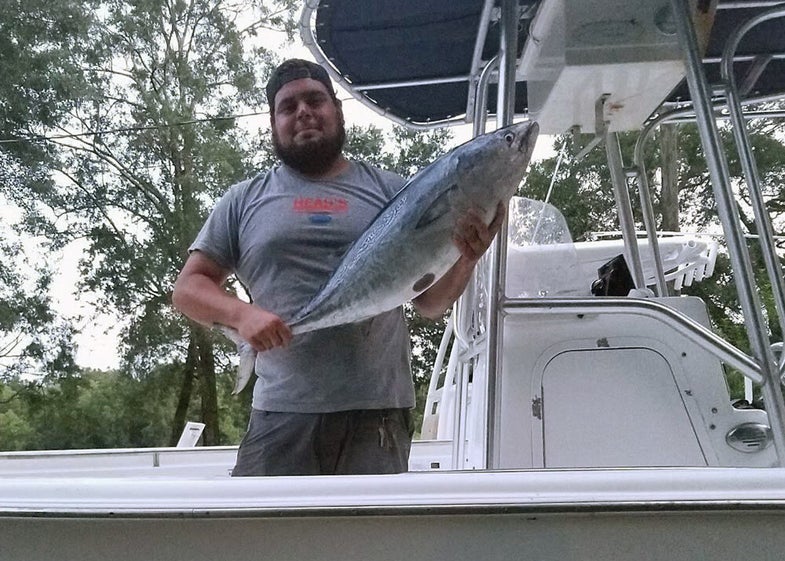 Kayle Davis with the new Alabama state record little tunny, which he says he cut in half for shark bait after weighing it in at the rodeo. Alabama Department of Conservation and Natural Resources
SHARE

Kayle Davis was fishing the Alabama Deep Sea Fishing Rodeo this summer and was trying to catch tuna and bait for shark fishing far offshore, when he landed several whopper bonito, or little tunny. One of them turned out to be the state-record bonito.

“I was fishing for blackfin tuna in 1,200 feet of water,” Davis told the Alabama Department of Conservation and Natural Resources on Sept. 9. “It was not the location I normally go fishing. I’m only on a 21-foot boat. I pushed 74 miles out. I go out a little farther, and we got into a good school of bonito.

“We were catching them in varying sizes, some like that one [that turned out to be the new state-record]. We were cutting them in half to freeze them for bait. We decided to keep that one to turn in at the rodeo. We had no idea we had a state record on board.”

Davis said his fishing friend called him and reported the fish was a state-record little tunny.

“I called and asked the rodeo about it,” said Davis “They said not to do anything with it. Luckily, I still had it in the cooler. By the time they told me they needed the fish, I had it cut in half to get ready to freeze it.”

Fortunately, state biologists had plenty of evidence of the catch through the rodeo and confirmed the species, which allowed the catch to be certified as an Alabama state record. At 22 pounds 4 ounces, Davis’ catch breaks the 65-year old Alabama state-record bonito of 21 pounds, which was set by W.A. March Jr. of Mobile, Alabama, in 1956. Itwas the longest-held record in the state saltwater record book.

Davis and his fishing buddies were “chunking” to entice a tuna bite. Chunking involves cutting dead bait into smaller pieces and letting them drift down to attract fish. Davis used a butterfly jig, which he dropped into the deep and started jigging rapidly.

Davis tried to get the fish back to the rodeo site in time to weigh in, but he couldn’t until the next day.

“I had to hold onto the fish for another day, plus we went fishing again,” he said. “So, it was Sunday afternoon [or 36 hours later] before we could weigh the fish. I had the fish out of the water for a long time and still had the record fish. It would have probably been a little heavier if I could have weighed it in earlier.”

Little tunny are classified as a tuna, and are found in temperate waters of the western Atlantic Ocean from Brazil to New England, and across to Europe. The IGFA all-tackle record for the species weighed 37 pounds, caught in Spain in June 2020.