The angler and his fishing buddy almost released the fish, but had second thoughts when they realized it could be a new state record 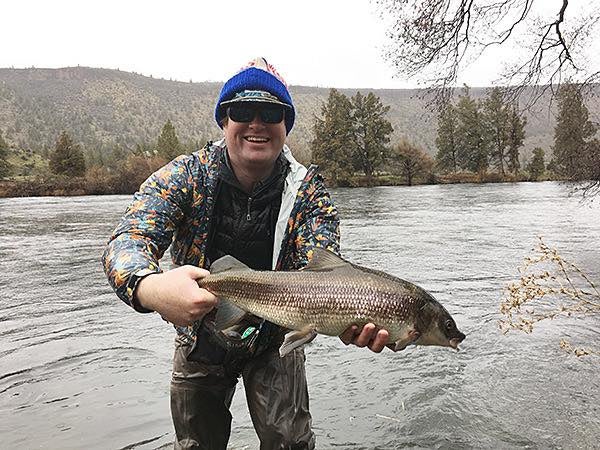 A fly fisherman in Oregon caught the new state-record mountain whitefish on Dec. 19. The 5 lb. 12 oz. fish was certified as a new state record on Jan. 7, and according to the Oregon Department of Fish and Wildlife, it could very well qualify as the new all-tackle world record for the species.

Alex Dietz, who lives in Bend, was fishing the lower Deschutes River near Warm Springs on Sunday, Dec. 19, when he hooked into the mighty whitey. Dietz, who identifies as a catch-and-release angler, was targeting the river’s redbands, which are a unique subspecies of rainbow trout native to the desert streams of the Columbia River Basin. He was dead drifting an egg pattern when the whitefish ate.

“My fishing buddy Jason Schreiber saw that I had a big fish on and came over to check out what was going on,” Dietz told ODFW. “We took pictures of it and kind of laughed about it for a while.”

Mountain whitefish are commonly found in the same cold-water habitats as trout, but the fish are typically held in much lower regard than the native trout and steelhead that the Deschutes is famous for. Also known as “mountain bonefish”, “bugle lips”, and by a host of other affectionate nicknames, these are rough fish: the lowly carp of the trout-fishing world.

Which helps explain why the two fishing buddies couldn’t help but laugh when Dietz landed the silver-sided slab. Dietz told ODFW that he was actually about to let the fish go when the two anglers realized it could be a new state record.

So they kept the fish and brought it to Newport Avenue Market in Bend, where it could be officially weighed on a scale certified by the Oregon Department of Agriculture—which is a requirement under ODFW rules. They also taped the 5 lb. 12. oz fish at 24 inches long, with a 14-inch girth.

The whitefish was officially added to the state’s record books on Jan. 7, and it beat the previous record of 4 pounds 14 oz. That fish was caught in 1994 by angler Roger A. Massey at Crane Prairie Reservoir, which is an impoundment located on the upper Deschutes near the river’s headwaters.

Dietz isn’t stopping with a state-record qualification, however, as the fish could also be eligible for world-record status. According to the International Game Fish Association, the current all-tackle world record is a 5 lb. 8 oz mountain whitefish that was taken from Alberta’s Elbow River in 1995. Dietz is submitting the necessary information to the IGFA as part of the certification process, and he plans to have the whitefish mounted for display at his home.

“We have known for a long time that the lower Deschutes has an abundance of mountain whitefish which anglers frequently catch while angling for trout,” said Jason Seals, ODFW Deschutes District Fish Biologist. “However, we never suspected that the Deschutes could have the state- and possible world-record mountain whitefish, so this was a great surprise.”