Beaver Lake has put out some big paddlefish over the years, and Chris Cantrell's fish could go down as the biggest one ever speared 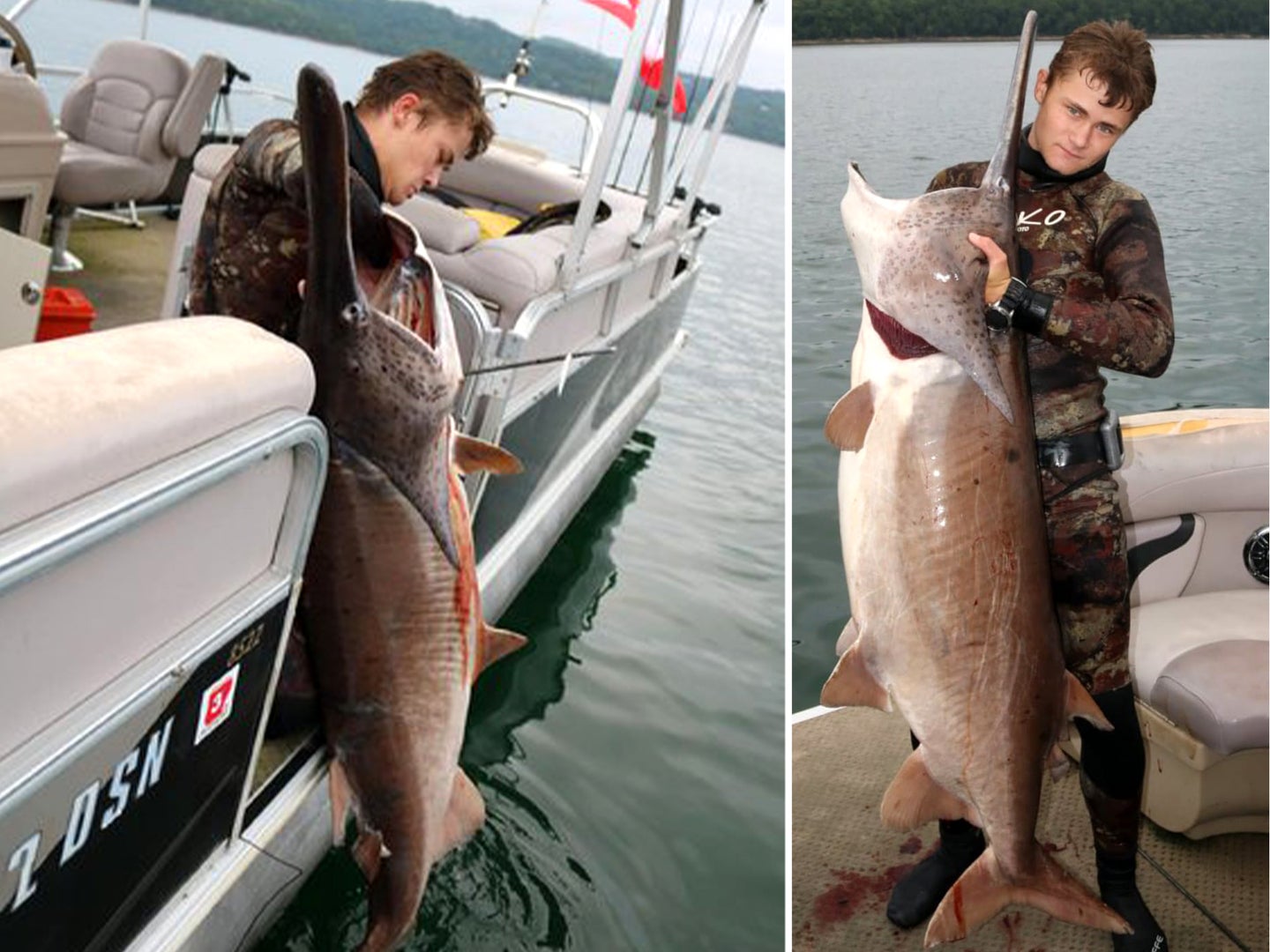 Chris Cantrell, of Berryville, Arkansas, speared a huge paddlefish over Labor Day weekend while diving in Beaver Lake. The fish weighed over 90 pounds and is a possible spearfishing world record, according to the Arkansas Game and Fish Commission.

Cantrell was diving in the Northwest Arkansas lake with his friend Andy Jeffries and brother-in-law Kalvin Cackler on Sept. 3. They were looking for striped bass and carp that day, but when Cantrell saw the giant paddlefish, he decided to make a play for it.

“I was on my third and final dive of the day when I saw it,” Cantrell told AGFC. “I was maybe 15 to 20 feet underwater when I saw the large shape. I thought it was a gar at first, but then I was able to get close enough to see what it was and take the shot.”

Cantrell had the right gear to battle an oversized fish. His speargun had a float line attached, which allowed him to stick the paddlefish with a barbed spear without getting pulled down by the 90-pound brute.

“I dropped the gun after the shot because the fish made a strong dive when it was hit,” Cantrell explained. “With a big fish, you drop the gun so that it doesn’t pull you down. The float line will keep it pinned. By the time I was back at the surface, the fish had already pulled the line from the gun and the 50 feet of float line. It was pulling against the float at the surface.”

The float line did its job and kept the massive fish from diving too deep, while Cantrell pulled on the main line and gradually worked the paddlefish to the surface. After a 15-minute battle, he drew the fish close enough to kill it with his dive knife. With the fish dispatched and loaded in their pontoon boat, the trio of spear fishermen knew they might have a record-sized fish on their hands. The hard part was locating a certified scale to weight it on.

“It was a holiday weekend, so finding somewhere with certified scales that was open took a long time,” Cantrell said. “The AGFC office was closed, and certified scales are required for any record submissions. My sister actually suggested we try calling a UPS store. To my surprise, one agreed.”

Placing Cantrell’s paddlefish on a certified UPS scale, it weighed 90 pounds, 12 ounces, which should be big enough to set a new spearfishing world record for the species. Those records are maintained by the International Underwater Spearfishing Association, which lists the current paddlefish world record as a 72-pound fish speared by Wesley Steward in 2019.

Jon Stein, regional fisheries supervisor for the AGFC, verified that Cantrell’s fish is indeed a paddlefish. He also said oversized paddlefish are not uncommon in Beaver Lake, and that most of those huge fish are holdovers from stockings that took place in 1996 and 2000. The current Arkansas rod-and-reel record—a 118-pound, 9-ounce paddlefish—was caught from the same lake in 2020, and Stein said that anglers there regularly report sonar imaging revealing paddlefish in the 100-pound class.

Looking at the state’s fishing records book, Cantrell’s paddlefish would fall under the “unrestricted tackle record” category, which is for fish caught by any legal means other than a rod and reel. Since there are currently no entries for paddlefish in this category, Cantrell’s fish should go down as a new state record.

Cackler, who runs the Beaver Lake Spearfishing Facebook page, told AGFC that he and his brother-in-law are getting the paperwork together and plan to submit the fish to the IUSA. Regardless of whether it qualifies as a world record, though, it was definitely the biggest fish Cantrell has speared in the two months since he took up the sport.

“My biggest fish before this was a 22-pound striped bass,” Cantrell said. “It was a trip to remember.”