Under the proposal, LeRoy Chiovitte's 17-pound, 8-ounce walleye caught in 1979 would be re-classified as a "historic" record 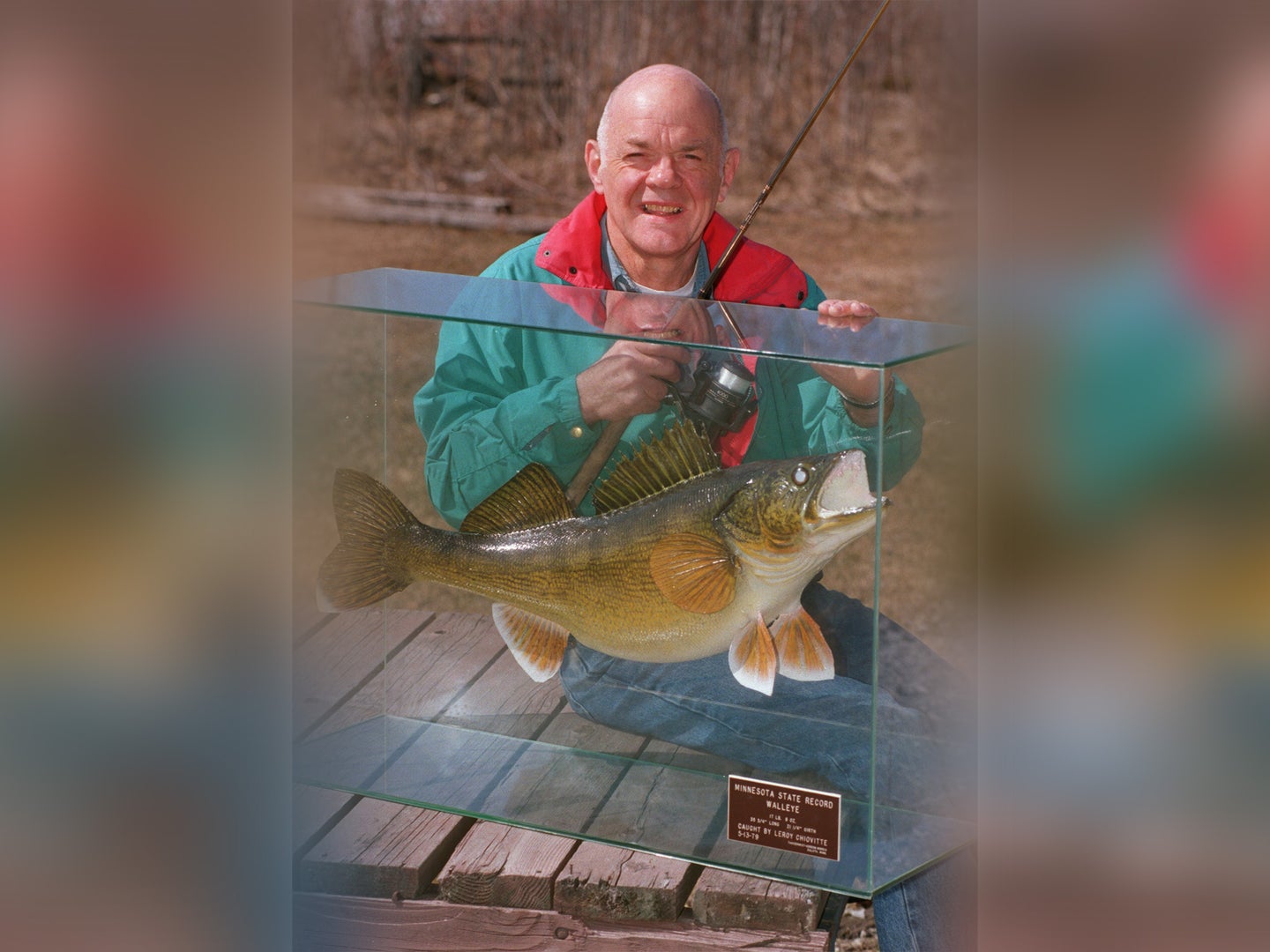 LeRoy Chiovitte's state-record walleye is one of the most coveted fishing records in Minnesota. Star Tribune via Getty Images
SHARE

Minnesota’s book of fishing records could soon be rewritten according to a new proposal from the state’s Department of Natural Resources. Under the proposal that was released earlier this month, the DNR would re-classify 12 of its current state records as “historic” while adding a “certified weight” category for each of those 12 species. This change would give anglers a chance to break records that have been on the books for years, including the coveted walleye state record that was established over 40 years ago.

The agency is also proposing to expand its record fish program by making several additional species eligible for catch-and-release records over the next few years.

The DNR says that a revamp of its century-old record program is necessary because some of the records established before 1980 would not be considered legitimate by today’s standards, the Star Tribune reports. Up until that year, the DNR didn’t require potential record fish to be weighed on a state-certified scale. (This is now a requirement for nearly every record fish program in the country, as well as the International Game Fish Association, which is the ultimate authority on fishing records worldwide.)

Going back even farther, the DNR didn’t even keep formal records before 1950, which means that some of the state-record fish were accepted without any proof other than the angler’s claims.

“We’re not saying these records are not valid. What we’re saying is that prior to 1980, we didn’t require certified weights. We don’t have a lot of information available on some of those older records. In fact, we have no information on some of them,” DNR fisheries manager Shannon Fisher told Outdoor News. “So, there’s been a group of us talking about this for the past couple of years, and we just decided let’s put this out there and see what people think.”

Fisher says that Minnesota anglers have supported the idea thus far—especially since it would give them the opportunity to replace some state records that have seemed unbeatable for generations now. Chief among these is the state-record walleye that was caught by LeRoy Chiovitte in 1979. Chiovitte’s fish weighed 17 pounds, 8 ounces, according to the DNR’s record book. But since he caught the fish a year before certified scales became a requirement, the legitimacy of that number will forever remain in question.

A few diehard walleye fishermen have come dangerously close to breaking Chiovitte’s record. In 2012, professional fishing guide Don Mickel caught a walleye in the Rainy River that was reportedly half an inch shorter than Chiovitte’s record fish but much girthier. Mickel’s walleye weighed 17 pounds, 9 ounces, according to his hand scale, but strict possession regulations required him to throw the fish back before he could make it to a state-certified scale.

Walleyes are the most iconic game fish in the state, and the chance for anglers to set a new walleye state record is a big deal. Importantly, the DNR would establish what it calls “minimum starting weights” for walleye and the other 11 species as part of its reclassification process. It’s unclear what those minimum weights would be, but theoretically the first person to catch a walleye over that minimum weight would be the new state record holder in the “certified weight” category.

In other words, the DNR isn’t proposing to declare a new state-record walleye right away. The agency would simply open the door for future record submissions, and there could eventually be two state walleye records recognized by the DNR: one historic record, and one certified weight record.

The other significant piece of the DNR’s recent proposal is the expansion of its “catch-and-release” record category. The category was established six years ago in response to demands from conservation-minded anglers—some of whom complained that they’d rather set a record-sized fish free instead of killing it just to have their name in a record book.

The DNR now has a separate application process for catch-and-release records. And with more anglers preaching about conservation ethics these days, the agency feels a need to expand the category. As it stands now, only four species are eligible for a catch-and-release record: flathead catfish, lake sturgeon, muskellunge, and northern pike. The DNR is proposing to add a total of 18 species to this list over a three-year span, as follows:

The end goal here is to give anglers the opportunity to seek record recognition while still practicing catch and release. This ethical consideration helps maintain healthy fisheries, and it’s especially important when managing for trophy species like lake trout and muskie, which grow very large very slowly, and make poor table fare anyways. It’s less critical when catching walleye, sauger, and other species, and the DNR has clarified that it will continue to support the regulated harvest of sustainable fish stocks.

“That’s the one thing we want to emphasize, too,” Fisher said of the agency’s proposal. “We’re not out here saying everybody should be doing catch and release. Is it a great opportunity to catch and release these large fish? Sure. That’s part of why we want to do the catch-and-release options, but we’re also not averse to harvest.”