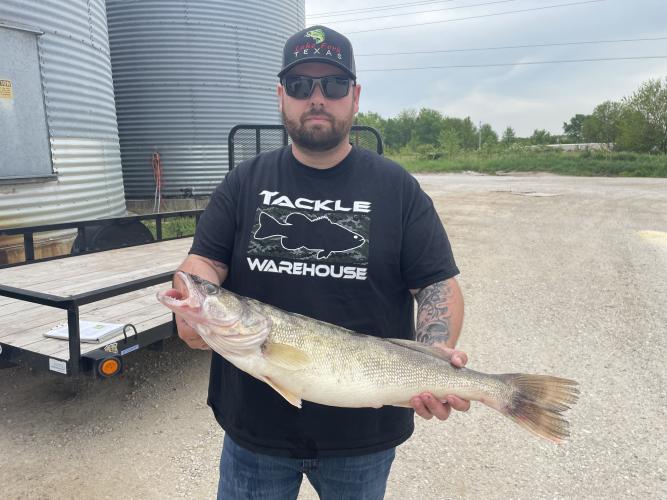 The 7-pound, 8-ounce walleye is a new Missouri state-record in the alternative methods category. Missouri Department of Conservation
SHARE

Tim Stillings of Morrisville, Missouri is now an official state-record holder thanks to the 7-pound, 8-ounce walleye he landed from the Sac River on May 16. But even though it’s his name alone that’s in the record book, he considers the catch a joint accomplishment with his friend Jake Myers, according to a news release from the Missouri Department of Conservation.

That’s because the two were running trotlines on the Sac when they caught the fish that is now the number-one walleye in the state’s alternative methods category. (MDC recognizes state-records in two categories: pole-and-line and alternative methods, which include trotlines, spears, and bows.)

Stillings told the MDC that he and Myers weren’t even targeting walleye that day.

“We run trotlines for catfish,” he explained. “It’s somewhat of a dying art. A lot of people don’t do it anymore. But this was the first walleye we’ve caught on a trotline, and it happened to be a state record.”

Read Next: 3 Ways to Catch Big Catfish Without a Rod and Reel

Stillings added that after they had the walleye in hand, Myers was the one who suggested it could be a potential record. So they took it to a certified scale in Bolivar, where conservation agents with the MDC verified the fish’s weight.

The fish replaces the previous alternative methods record of 6 pounds, 14 ounces that was set in 2018. Stillings said he plans to have a replica made of the trophy walleye. “For those who ask where I caught it,” he added, “right in the mouth.”