The Biggest Bass of All Time 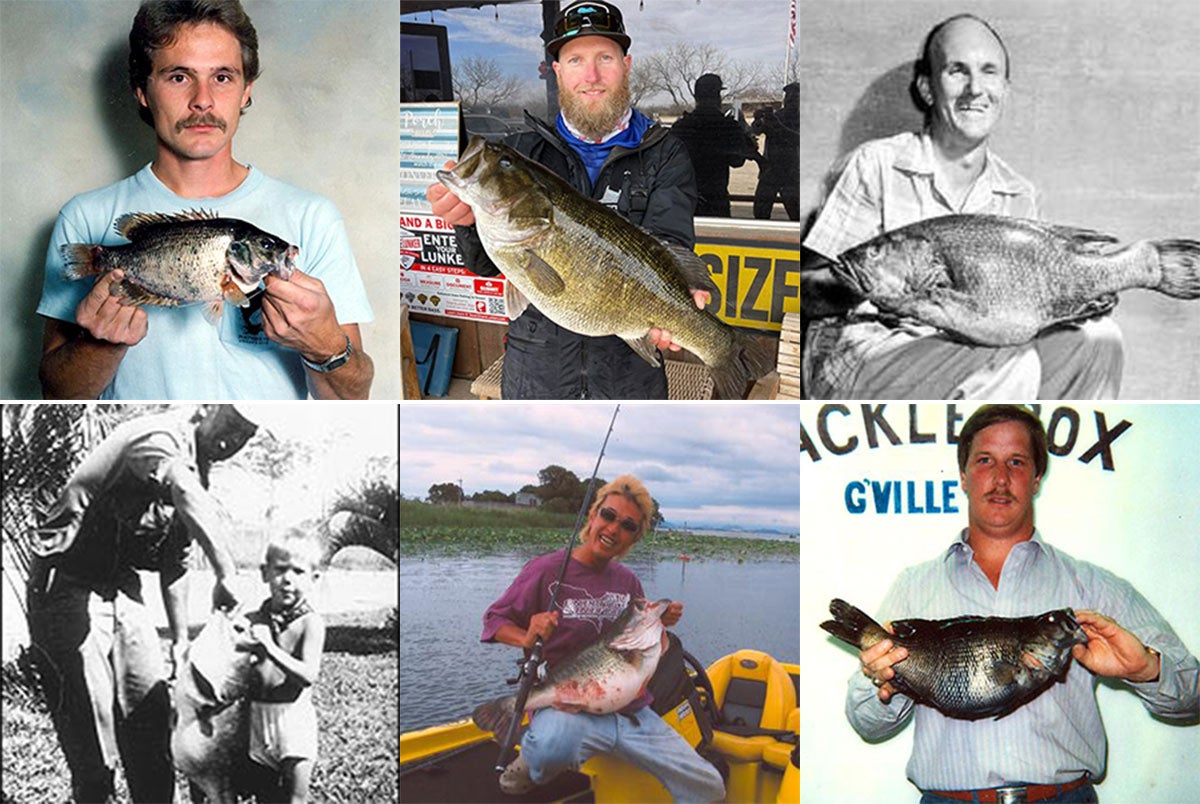 A snapshot of the largest black bass ever caught. Outdoor Life
SHARE

When it comes to black bass, largemouth and smallmouth rule the day. Both have won over America’s bass fishermen with their aggressiveness, fighting abilities, and size. But when we’re considering the biggest bass of all time, there are a variety of other species that deserve our attention too. Spotted bass, shoal bass, Guadalupe bass, and meanmouth bass (which is a cross between a smallie and a largemouth) all demand recognition in the record books.

Here’s a look at some of the biggest bass ever registered in the International Game Fish Association’s world records program. The differences in weights for these species are interesting, but so are the habits and behaviors of these related fish.

Two anglers are tied for the IGFA’s all-tackle record for largemouth bass, each with 22-pound, 4-ounce fish. The most recent is Manabu Kurita who caught his bass in Japan’s Lake Biwa on July 2, 2009. Kurita was fishing with live bluegill using a Deps Sidewinder rod with a Shimano Antares baitcasting reel spooled with 25-pound line. His bass measured 27.20 inches long with a 27-inch girth.

The historic world record was caught by George W. Perry on June 2, 1932, in Montgomery Lake in Georgia. No details are recorded about his bass in the IGFA records, but an archived story by Texas Parks & Wildlife magazine tells the full story of the catch and says he hooked the world record bass on a Creek Chub fantail shiner. The all-tackle length record for largemouth is 25.59 inches, held by three anglers.

Considered the most popular freshwater game fish, the largemouth bass is an aggressive fighter, exploding on baits and ready to launch skyward from cover with aerobatic power and style.

They were originally found in the eastern United States of America and parts of northern Mexico and southern Canada, but today are resident across the states, Mexico and Central America, and many other countries worldwide.

Largemouths, as may be expected, are identified by a mouth that extends at least to, and often beyond the rear edge of the eyes. They are the only fish in the Micropterus family that has that distinction. The first and second dorsal fins are almost separated by an obvious deep dip, and there are no scales on the soft rayed second dorsal fin. The fish identified as the Florida largemouth has the same characteristics.

In all other species of Micropterus, the mouth doesn’t extend to the back of the eyes, the two dorsal fins are clearly connected, usually with a slight dip between them, and the scales overlap the base portion of the second dorsal fin.

The IGFA all-tackle record for smallmouth bass is an 11-pound, 15-ounce fish caught July 9, 1955, in Dale Hollow Lake, Tennessee, by David Hayes. No further details are available about Hayes’ catch in the IGFA records, but an ESPN interview says he caught the fish while trolling a 600 series pearl Bomber.

Smallmouth records by line class also reveal some incredible catches. For example, the world record for an angler using 2-pound line is a 7-pound fish caught in Alabama’s Pickwick Lake by Herbert Ratner Jr. in June 1997. This 24-inch smallmouth had a 17-inch girth. Ratner caught the fish using a Shakespeare Ultra-Lite rig, fishing with a live minnow.

The record for an angler using 4-pound line is an 8-pound beast caught in Lake Erie, Ohio, in May 1999 by Ronald Yarosz, who was fishing with a Bass Pro Shops Microlite rod and a Shakespeare 2500 ALX reel. This fish measured 23.38 inches with a girth of 18 inches.

Prized for their tenacity and fight, smallmouths will often give you multiple jumps and tail-walks, especially post-spawn as waters warm and fish activity increases. Few things are as fun as having a big smallmouth slam a spinner or a stick bait on the retrieve, stopping it cold, just like you hooked into a submerged log.

Smallmouth bass are native to the eastern United States and southeastern Canada from Manitoba to Quebec. They grow exceptionally large in the warmer waters of the Tennessee River system across multiple states and range west to eastern Oklahoma. Smallmouths have been stocked in many other states and countries, as well.

The upper jawbone on smallmouths extend only to about the middle of the eye. They have clearly connected dorsal fins. Smallmouth bass can vary considerably in color, depending on their habitat and age, but usually have some variation of a distinct brown to bronze versus the greenish skin with black markings of a largemouth. Smallmouth bass can also sport bars on their bodies, typically more prominent in younger fish. The eyes are red or orangish.

The IGFA all-tackle record for Alabama bass is held by Nick Dulleck, who caught an 11-pound, 4-ounce Alabama bass on a jig in California’s New Bullards Bar Reservoir. Caught on February 12, 2017, that fish was 24.75 inches long with a 21-inch girth. Dulleck was using a Powell rod with Shimano reel spooled with 20-pound Power Pro line.

Like smallies, they like deeper water with some current. Spotted bass have been caught in waters as deep as 100 feet in one TVA system lake in Tennessee, according to IGFA.

It’s easy to confuse a spotted bass with largemouth bass—although the spotted bass tend to be a little smaller. Their coloration is similar, each with a greenish hue, and the dark stripes or blotchy marking along their midline. Their other features, though, resemble more closely the bother members of the black bass family. They have reddish-orange eyes, and scales at the base of the second dorsal fin, with clearly connected first and second dorsal fins. Also, the upper jawbone doesn’t extend past the rear edge of the eyes. Spotted bass also have unique, small black spots below the lateral line.

The IGFA says that record-size specimens of spotted bass likely have gone unnoticed due to their resemblance to their bigger brethren. Hybridization is also an increasing issue in some waters.

A native Texan, and the designated state freshwater fish, the Guadalupe Bass is found in the Brazos, Colorado, Guadalupe, and San Antonio rivers and some lakes—there’s also an introduced population in the Nueces River. The fish is generally green in color, lacking the vertical bars found in its smallmouth cousins. The jaw doesn’t extend beyond the eyes.

They like fast-flowing water and can live in small streams, which limits how they’ve adapted in terms of growth potential. Anglers who like to work the edges of small streams enjoy targeting these feisty fish. Any fish longer than a foot is considered a nice representative of the species.

Guadalupe bass build gravel nests for spawning, ideally in shallow water with a good current. The males guard the nests after the females release their eggs.

The IGFA world all-tackle record for shoal bass is an 8-pound, 12-ounce fish caught on January 28, 1955, by Carl Davis in Florida’s Apalachicola River. Davis was using a Quantum Tour Edition rod with a Lew’s reel spooled with 12-pound line. The fish hit a Bandit crankbait.

Shoal bass are native to the Apalachicola drainage, which includes the Chattahoochee and Flint Rivers in Alabama and Georgia, and the Apalachicola and Chipola River in Florida. Each of these rivers drains into the Gulf of Mexico via Apalachicola Bay. Shoal bass have spread to the Ocmulgee River and the Altamaha River. They are so-named due to their preference for inhabiting shoal areas of the rivers and larger creeks. Shoal bass, too, are sometimes called redeye bass and can be confused with spotted bass.

Shoal Bass range from olive-green to dark olive to almost black, with a dusky to black blotch on the gill cover and just before the tail. Three diagonal dark lines are present laterally on the head. The eye’s iris is usually bright red. Unlike spotted bass, it has no teeth on its tongue.

The IGFA world record Roanoke Bass was caught by Thomas Elkins on November 11, 1991, in Virginia’s Nottoway River. It weighed 1 pound, 5 ounces, and measured 12.25 inches long. Elkins was trolling with live minnows, using a Shimano rod with a Penn 101 reel spooled with 12-pound line.

The Roanoke Bass, sometimes called a redeye or rock bass, is shaped somewhat like a true rock bass but has a dark, olive-green to olive-brown back that fades down to grayish sides and a white belly. The spots on the scales are smaller than those on a true rock and it has small whitish or yellowish spots on its upper body.

The bass is found only in the Roanoke and Chowan River drainages of Virginia, and the Tar and Neuse River drainages in North Carolina. While the fish prefers clear, moving water—especially for nesting—it tolerates the sometimes turbid and dark swamp waters such as seen on the Nottoway and Blackwater Rivers. They nest in gravel or clay with the male guarding the eggs and larval young.

The IGFA all-tackle record for Suwannee bass is held by Ronnie Everett, who caught a 3-pound, 14-ounce bass on March 2, 1885, in the Suwannee River. The fish, 15.75 inches long with a girth of 15 inches, hit a spinnerbait. Everett used a Browning SilaFlex 903 rod with a Shimano Bantam Mag 10 SG reel spooled with 14-pound line.

Suwannee bass, found in waters near the Florida/Georgia line, have the reported smallest range of the black basses. They have been recorded in the Ichetucknee, Santa Fe, St. Marks, Suwannee, Wacissa, and Wakulla rivers of Florida, plus the Alapaha, Ochlockonee, and Withlacoochee rivers of Florida and Georgia. River denizens exclusively, the favored food is crayfish. Most Suwannee bass caught will be a foot or smaller.

A pending world record for meanmouth is an 11-pound, 1-ounce fish caught by Brady Stanford while fishing Texas’ O.H. Ivie Lake on February 22, 2022. It will obliterate the existing record held by Dru Clayton Kinslow with an 8-pound, 8-ounce meanmouth caught in 2006 on Veterans Lake in Sulphur, Oklahoma. Stanford’s bass, which was released after getting an official weight, measured 24.75 inches long with a girth of 20.5 inches.

Kinslow’s bass was 21.75 inches long with a 17-inch girth. Kinslow was wielding a Quantum rod with Shimano reel spooled with 20-pound line. The fish hit a Stanley jig.

The Meanmouth Bass, so named because of its aggressiveness, is a smallmouth-largemouth hybrid that was developed in Illinois more than 50 years ago and is now stocked in lakes around the country. Natural crossbreeding is also occurring. The fish are found in a multitude of lakes, including those in Georgia, Missouri, Texas, Oklahoma, Arkansas, and more.

The moniker was earned when the researcher initiating the crossbreeding effort saw a school of these hybrids attack a female swimmer, driving her from the pond. He also saw them attack a dog in shallow water.

Reportedly, the most successful examples of this hybrid outside of a controlled setting come when largemouth bass eggs are fertilized with smallmouth sperm. This may happen when aggressive male smallmouth bass are introduced into waters with limited spawning sites or in altered habitats such as reservoirs. Crossbreeding also occurs between smallmouth and spotted bass, resulting in particularly ornery offspring.