FX Dreamline Tactical .25 is a small game gun that ticks all the boxes: accurate, powerful, reliable, ergonomic, and a pleasure to carry and shoot in the field 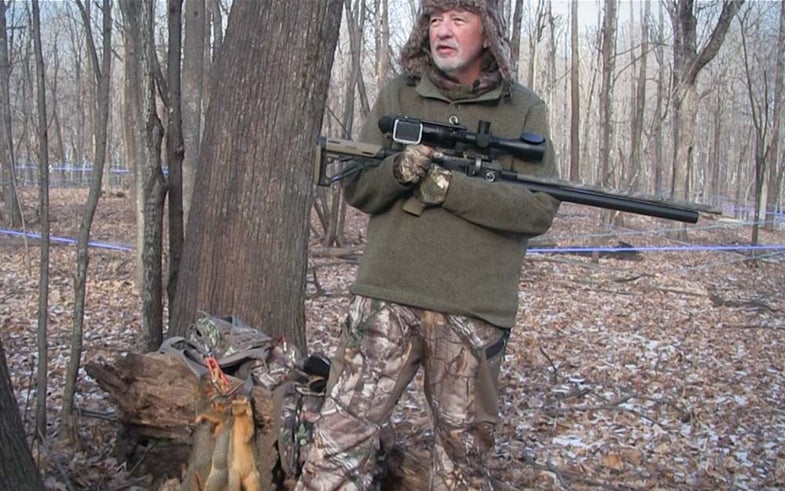 For this air rifle review, I tested the FX Dreamline tactical as a versatile small game airgun, but its user-friendly modular system allows it to be much more. The FX Dreamline is a modular airgun system that can be optimized for a specific shooter or application. Its modular design allows for a variety of different Dreamline configurations using the rifle’s core components. This means you can set up the gun as a standard sporter style hunting rifle, a tactical target gun, or a bullpup for chasing squirrels. My personal Dreamline is the Tactical version equipped with a collapsible Hogue AR-style buttstock and pistol grip that make it a lightweight and ergonomic small game rifle.

The Dreamline utilizes the FX Smooth Twist X barrel (STX), the same barrel housing and liner system used in the company’s premium rifles, such as the FX Impact, FX Crown, and FX Wildcat. This STX barrel system allows you to change the caliber between .177, .22, .25, and .30, and uses interchangeable inner barrel liners for different twist rates and other bore modifications. With different barrel liners, you can select a twist rate optimized for shooting the .25 caliber Hybrid Slugs for instance, which is a game changer for long range shooting. This combination of gun, barrel liner, and projectile performed impressively on a prairie dog shoot in South Dakota last summer, consistently hitting at 100-125 yards.

The Dreamline leverages the Adjustable Match Precision Regulator (FX AMP Regulator) technology, which can be adjusted externally for the gun to operate at higher or lower pressures without requiring it to be depressurized between settings. The AMP regulator is rock stable and doesn’t shift once you find your desired settings.

Not only is the Dreamline fully adjustable in terms of the physical configuration, but you can also fine-tune its performance by adjusting the valve flow, hammer tension, and regulator pressure. As I’ve mentioned in the past, the ability to tune a pellet gun in this manner is the airgunner’s analogy to handloading for a firearm. The performance of the gun can be optimized for a specific projectile or application. These adjustments are user friendly, and allow the shooter to optimize the performance and accuracy of the Dreamline as needed.

As mentioned, the modular FX Dreamline series offers various setups, so it’s difficult to lock down a concise specification. Instead, I’ll provide a few key functional specifications related to the FX Dreamline Tactical version I use most often.

My Dreamline wears an AR style buttstock and grips, and the Mil-Spec adaptor allows for several stock options. The rifle is 43 inches in length overall, with a 23.6-inch barrel  and weighs an airy 6.2 pounds. Air is stored in a 290cc capacity under-barrel tube reservoir that fills to 230 BAR. I adjusted my gun to strike a balance between the power, accuracy, and shot count using JSB Hades pellets for small game hunting. This generates about 870 fps slightly over 44 ft-lb and yields about 35 shots per fill.

FX Dreamline rifles utilize a large capacity rotary magazine, and the magazine in my .25 caliber Tactical version holds 16 pellets or slugs. This is the same magazine FX uses in their top-of-the-line Crown model and is auto-indexed with a smooth side lever cocking action that requires minimal effort and is one of the best examples of this mechanism ever built.

This trigger is one of the best I’ve used on a production rifle, and the Dreamline uses the well-respected FX match grade trigger, set at 15 ounces from the factory. I hunt in very cold weather and have my trigger set at 2-pounds, with a short take up and crisp break, and I find this works better with cold fingers and/or gloves.

Read Next: The Most Powerful Air Rifles of 2022

Testing the FX Dreamline in the Field

The adjustability of the Dreamline allows the shooter to set up the gun to suit their own needs. As I mentioned, I optimized my gun for the 26.54 grain Hades pellets, and the average velocity obtained over a 30-shot string was 870 ft-lb with a 6-fps spread.  These consistent results speak volumes for how well the AMP regulator works. It is also worth noting that unlike some regulators I’ve used, the selected setting stays locked in, and I’ve never had any drift. This 870 fps with a 26-grain pellet equates to a very respectable muzzle energy of 44 ft-lb, and in a .25 is perfect for small game hunting.

From the bench, I put 10 of the JSB Hades pellets in a dime-sized hole. I achieved slightly tighter groups with the JSB Exact pellets but not significant enough to start using them. The Hades are hard to beat with respect to terminal performance, so I stuck with this projectile.

Read Next: The Best Air Rifles for Hunting

What the Dreamline Does Worst

It’s difficult to say where this gun falls short, because it all depends on how you configure your own rifle. I would say the biggest drawback is its price point. FX airguns are expensive, and they don’t offer a true budget gun. While the company considers the FX Dreamline as a gateway to their premium air rifles, it still has a fairly steep entry price starting at $1,100. I don’t think this is unreasonable for their quality of products, but it’s not pocket change either. The only other issue is deciding how you want to configure your rifle.

What the Dreamline Does Best

Again, this question is hard to answer concisely, because depending on how you configure your Dreamline, it does almost everything well. I suppose it’s fair to say the standout feature of the Dreamline is that it has the latitude to be configured for any shooting task and do it well. Using the Dreamline platform, a shooter can configure a top rate hunting gun, a competitive field target rifle or benchrest gun, or a fun plinking rifle.

I turned my personal FX Dreamline Tactical into what I consider to be a near perfect small game air gun. It’s a tackdriver I feel comfortable shooting at long (by airgunning standards) ranges, and at 44 ft-lb I know any small game I encounter is going in the bag. My lightweight Dreamline carries well, even when I’m loaded down with other gear. It provides a relatively high shot count and coupled with a high capacity magazine lets me hunt squirrels or rabbits for an entire day without  reloading it.

The ergonomic sidelever cocking handle along with a smooth, short action and reliable magazine feed make it easy for quick follow-up shots, and the tactile and fully adjustable two stage match trigger enhances the gun’s accuracy for hunting or competition.

Final Thoughts on the FX Dreamline

It’s probably apparent from the tone of this review that I’m a huge fan of my Dreamline Tactical .25. It ticks all the boxes as a small game gun.

This gun is accurate, powerful, reliable, and ergonomically designed for shooting. I’ve used the FX Dreamline Tactical for prairie dogs in South Dakota, jackrabbits in South Texas, the cold squirrel woods of Minnesota, and snowshoe hares in the deep snowpack of Wisconsin. The gun has never failed me or offered less than stellar performance. Even though the Dreamline sits at the lower end of the premium market price point, this gun delivers premium quality and performance.