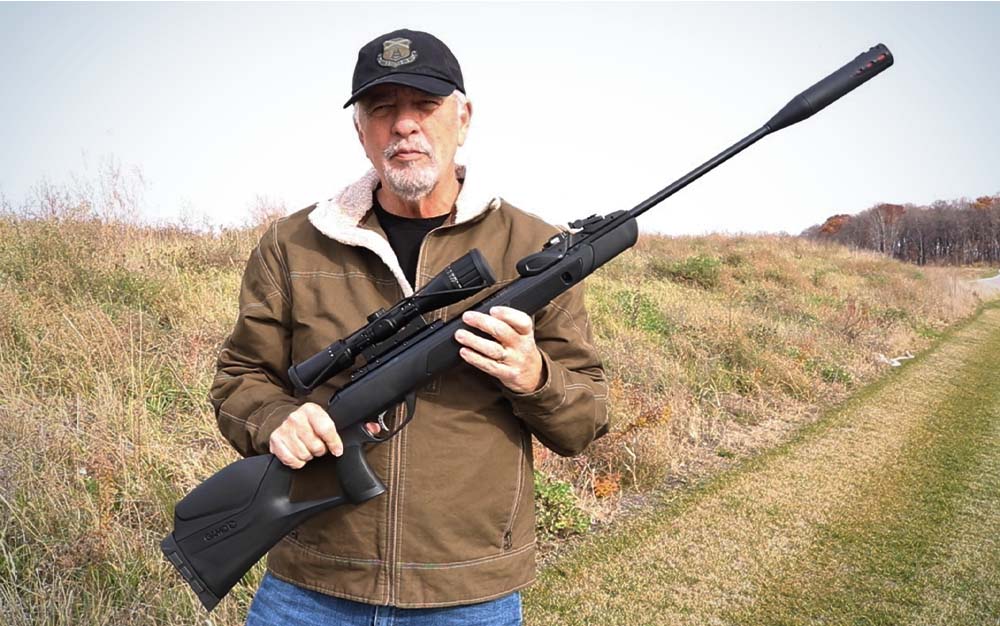 The author with the Gamo Swarm Magnum .22 10x, getting ready for a range session. Jim Chapman
SHARE

Even though my preference is a precharged pneumatic air rifle for hunting, I still have a thing for spring piston airguns. Springers are compelling to me because they are fully self-contained. I can break the barrel or cock a sidelever or under-barrel lever mechanism, load a pellet, and I’m ready for a small game hunt. These airguns appeal to me, because they are rugged and reliable and a challenge to shoot accurately, which requires me to pay more attention to my technique. Simply stated, shooting a spring piston airgun with consistent accuracy demands a solid and well-executed shooting technique.

There are other reasons a springer might be the right gun for you. The cost is generally much lower, and they don’t require air tanks, compressors, or other extra gear. There is a huge selection of air rifles available from the newest synthetic stocked gas piston models to the heirloom quality European springers that are works of art as well as effective hunting, target, and plinking guns. The fact that they are generally quiet and of moderate power makes many of them excellent options for backyard plinking or a day in the woods chasing squirrels.

Shooting spring piston airguns requires a fair bit of practice, which I view in a positive light. However, in my opinion, one of the main limitations of the spring piston airgun is that, outside of a few unsuccessful designs over the years, these guns are all single shot. This may not be a problem for many shooters, but I live in the frozen north region of the country, and much of my small game hunting occurs in frigid conditions. Fumbling a .177 pellet as you try to seat it with cold numb fingers, leaves a lot to be desired when a fast reload is called for. However, with the Gamo Airguns Swarm Magnum 10X Gen 2, this isn’t a problem.

This magazine fed repeater is a spring piston air rifle that utilizes the company’s Inertia Fed 10x Quick-Shot technology. The Swarm Magnum is a gas piston break barrel rifle, that auto-loads by the 10x Quick-Shot mechanism in conjunction with a 10-round rotary magazine. For me, this removes the primary obstacle for using a springer in the squirrel woods during the winter season. I can load the magazine and head to the squirrel woods knowing I only need to cock the rifle.

At first glance, the Swarm Magnum looks like many other break barrel springers, except for the magazine sitting on top, but we’ll circle back to that. The gun’s synthetic thumbhole stock, according to Gamo’s website, is manufactured from an automotive grade glass filled nylon material. It has a stippled area on the pistol grip and forestock, which is equipped with an adjustable cheek piece. The gun also incorporates Gamo’s shock wave absorber (SWA) recoil pad to reduce recoil and smooth out the shooting cycle.

As mentioned, the defining attribute of the Swarm Magnum is that it is an auto-loading break barrel air rifle. The 10X Gen 2 quick shot magazine provides 10 shots before reloading and is based on a system that uses the inertia of recoil to load pellets. All you need to do is cock the gun, as with any break barrel springer, and it’s ready to go.

The Swarm Magnum is powered by Gamo’s IGT Mach 1 gas piston, which offers several benefits of the gas piston technology powerplant over a standard mechanical spring piston. This implementation results in a smoother cocking action, a much tamer shooting cycle with less vibration, better performance in cold weather (a big plus in the Minnesota winter), and improved durability and reliability. You can also leave the rifle cocked for long periods of time without the spring taking a set. The cocking effort sits on the heavy side at about 41 pounds, but still manageable by most shooters of medium stature.

The trigger is two stage adjustable Custom Action Trigger (CAT), that allows separate adjustment of travel for each stage. My gun is set up with a short initial travel to the break wall, then a nice crisp break at about 2 pounds. The trigger blade is wide and offers a good contact area to the pad of the trigger finger, and the safety sits inside the trigger guard just in front of the trigger. The safety is out of the way when engaging the trigger but still easily accessible.

Testing the Gamo Swarm Magnum at the Range

When testing the Gamo Swarm Magnum, I opted to use the BSA Outlook 3-9×40 that Gamo provided, rather than the scope packaged in the combo. This is a better-quality scope, and I recommend sourcing the rifle and scope separately. This rifle is accurate, and I think it deserves a scope that can capitalize on that intrinsic accuracy.

I tried a few different pellets but found that the rifle shot particularly well with the JSB Match Diabolo Hades 15 grain pellets, so I used these while setting up the gun for a hunt. Over the chronograph I was getting an average velocity of 845 fps, for a muzzle energy of about 24 ft-lb. I could consistently hold ¾ inch groups at 40 yards and shot a few 10 shot groups under an inch using my portable shooting chair. That’s good power for a springer, but a PCP like the Air Venturi Avenger Bullpup can shoot heavier pellets and generate 42 ft-lb.

The cocking effort is heavy and smooth with a fairly long cocking arc. The 10x Quick-Shot mechanism worked flawlessly and after shooting a tin of pellets over a few range and plinking sessions, I didn’t have one failure to feed. The magazine itself is easy to dismount, load, and reinsert for shooting. The shooting characteristics of the Swarm Magnum are tame for a gun generating this power output, and the stock is ergonomic and comfortable.

What the Gamo Swarm Magnum Does Worst

An extensive day shooting on the range or plinking with this gun’s heavy cocking mechanism equates to a day in the weight room. You wouldn’t notice this effort if you’re just hunting, but a hundred consecutive shots feel like a workout. That’s not to say you can’t have a fun plinking or target session with the Gamo Swarm Magnum, but personally, I’d look for a lighter cocking effort with lower power if my primary application is high volume target shooting or plinking.

What the Gamo Swarm Magnum Does Best

Considering the gun’s physical dimensions, I think the accuracy and power it produces—and the ability to shoot 10 times without a reload—makes the Gamo Swarm Magnum an excellent choice for a small game hunting rifle. Moreover, this is one air rifle I’d appreciate using in the Northern woods where fumbling with a .22 pellet under artic conditions (when your fingers are cold enough to fall off) is a non-starter. I’m also a fan of the gas piston technology that allows you to cock the rifle, set the safety, and not worry about leaving it cocked all day. While it’s true that the modern mechanical springs are more robust, I still don’t like leaving my mechanical spring guns cocked for long periods of time.

This rifle is quiet and employs Gamo’s Whisper Fusion Sound Suppression technology. I don’t believe suppressors and barrel shrouds do much for springers shooting at subsonic velocities, since most noise comes from the spring mechanisms, but whether it’s the Whisper Fusion Technology, the subsonic pellet velocity, or the mechanical function of the gas piston, this gun is quiet.

I have to say that Gamo succeeded in designing and manufacturing a multishot (gas) spring piston air rifle that is reliable and functions flawlessly. This capability is handy in any condition but is a game changer for those of us hunting and shooting in colder climates. The stock design and ergonomics of the gun make it shootable under field conditions, and the adjustable cheekpiece, well designed thumbhole stock and pistol grip, and the SWA recoil pad provide a consistent mount and comfortable shooting experience. The trigger lets the shooter capitalize on the intrinsic accuracy of the rifle, and the 24 ft-lb energy output can drop any small game in its track. I think if you are looking for a spring piston hunting gun, especially for cold weather hunts, this is one to look at.