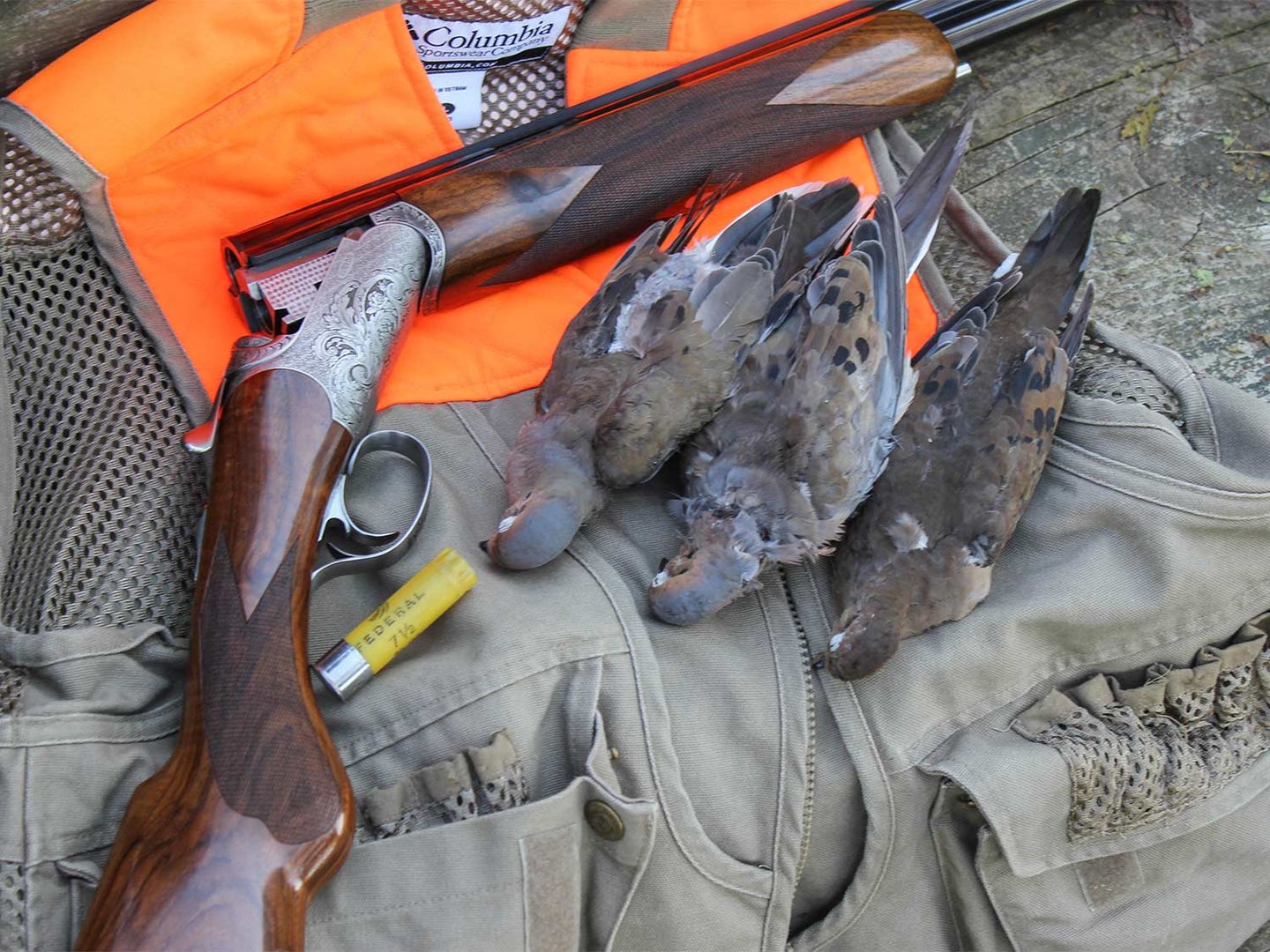 Most of us begin our hunting season in a dove field. Sept. 1 is the unofficial kick-off to hunting season. It has become a hunting holiday of sorts, a celebration of yet another year afield. Across the nation, hunters of all ages head afield with an upturned bucket, a box of shotshells, and dreams of bacon-wrapped dove breasts with jalapeños and cream cheese. More doves are harvested than all other gamebirds combined, and with an estimated U.S. population of between 350 million and 500 million, these birds provide plenty of opportunities in nearly every state. But before you go, you need to know where the doves will be. Here are 10 dove hunting tips that will put more birds in that five-gallon bucket.

1. They Are Where They Eat

According to Cornell University’s Lab of Ornithology, mourning doves need to eat between 12 and 20 percent of their body weight each day to survive. That equates to roughly 71 calories, which may seem like a small meal until you consider that a dove’s diet is comprised primarily of seeds. This means that doves need to find and take advantage of any available food resources, and in areas where their favorite foods are abundant—agricultural fields, disturbed ground, and mowed fields—you can expect to see high numbers of birds congregating throughout the day. Key in on food sources as you scout for birds, and pay close attention to any areas where seed-bearing grasses, weeds, and crops are abundant.

Doves feed primarily on seeds, but according to Mississippi State University publications they don’t scratch like other birds. This means that doves must find food sources that are accessible on the ground. Cornfields, sunflower fields, and native prairie grasses provide ample food but the birds can only utilize these food sources when ground cover is minimal. One of the best dove hunting tips I can offer is to look for areas where there is plenty of open dirt to accommodate the birds as they feed. This type of habitat allows doves to feed efficiently and will hold more birds than areas with abundant ground cover. Freshly-disked areas are also very attractive to birds. If you’re a landowner simply turning over the soil, which exposes seeds and makes for easy feeding, will draw large numbers of birds.

Monocultures—areas that are dominated by a single plant species—can provide doves with abundant food, but areas dominated by a single food source generally offer a boom-or-bust proposition for birds. When seeds are mature and available the birds will have plenty to eat, but when the crop is cleaned-up the birds will largely vacate the area. Wildlife biologists know this and generally plant dove fields with a variety of mixed seeding plants including browntop millet, barley, grain sorghum, and sunflowers. A good dove hunting tip is to pay special attention to areas where there are a variety of seeding plants in proximity to one another when you’re scouting. These areas will attract birds throughout the season.

Read Next: Five Steps to Help Your Kid Enjoy the Dove Hunting Opener

4. Know Which Native Plants Are Best For Dove Hunting

Most hunters recognize agricultural crop fields that will attract birds. However, if you understand which native plants are most attractive to doves you’ll be able to identify potential hotspot that might be overlooked by others. Doves feed on a variety of native and non-native plants in the fall, and very few hunters can recognize all of them. Pay particular attention to stands of barnyard grass, ragweed, Johnson grass, lespedeza, poke weed (identifiable by its purple berries and stems), sedges, and wild peas. All of these plants are very attractive to the birds—and largely ignored by other hunters. Open areas around these plants are hidden dove hotspots.

5. Knock Out The Competition

6. Focus on Water When Dove Hunting

Water is critical for dove digestion, and the birds will not nest or roost far from a suitable water source. In dove terms, a “suitable” source of water is one that has little vegetation around the shore to obstruct the birds. It’s not uncommon to see doves watering multiple times a day, especially during periods of warm, dry weather. Doves tend to seek out water more often during the morning and evening hours, so hunting near an open water source late in the day is oftentimes a great way to shoot a limit. Ponds and rivers will attract doves if their banks aren’t too steep and there’s little vegetation, but seeps in pastures, small creeks, and even puddles are all favorite watering points for birds. Set up well away from the water’s edge and use natural terrain to conceal your location. Oftentimes doves access water from the same direction each time, and once you identify the flight pattern you can set up accordingly.

Read Next: 5 Things You Need to Attract More Birds

Mourning doves are partial migrants, but in most areas you’ll find year-round resident birds. By keying in on the behaviors of resident doves prior to the season you’ll have better insight regarding the behavior of the migratory ones. In the weeks leading up to the opener, pay close attention to areas where resident birds are abundant and take note of flight patterns and movement times. This will provide you with a great deal of insight that you might have missed and you’ll also be able to map-out the network of travel corridors the birds use as they travel from feeding to watering to nest locations. Pre-season scouting will also allow you to identify possible hunting locations, and it’s a good idea to actually sit and watch for birds prior to opening day.

Columbidae birds like mourning doves have crops, which are essentially enlarged muscular pouches that extend from the bird’s esophagus. Crops store food while the birds are feeding (one reported dove crop held over 17,200 bluegrass seeds) and, in the case of doves and pigeons, create “crop milk” which is a rich source of nutrients for nestlings. To help digest the seeds in their crop, doves swallow small stones known as grit. Grit is often collected along the sides of gravel roads, so these areas attract birds. If you find that your local public dove field is overrun with other hunters look for nearby gravel roads where the birds stop to collect grit. These areas may prove more productive than overhunted fields.

9. In Dove Hunting, You Must Rest Fields

Doves are not particularly sensitive to hunting pressure, but you can ruin a hunting area by taking limits day after day. A smart dove hunting tip to know is that by the end of the first week of dove season most public fields will be shot-out and the remaining doves in the area will have decided to look for food elsewhere. If you only have one field to hunt then do so sparingly—each field needs at least a full day of resting before being hunted again for optimal success, but two or three days is even better. During your pre-season scouting be sure to locate at least three different hunting locations and rotate between these sites. Sure, you might have bagged a limit on successive days in your honey hole, but it’s better to let the area settle before another shoot. Don’t exclusively hunt feeding areas either. Divide your time between feeding locations, grit sites, and water sources.

Read Next: How to Kill More Birds on Opening Day

One final dove hunting tip for you: Doves have exceedingly good eyesight, an important feature for birds that seek out tiny seeds while flying at speeds up to 55 miles per hour. It’s long been known that doves are adept at seeing movement and avoiding predation, but research has shown that doves may actually be able to see color, and the birds may avoid any hues that look out-of-place in their environment. This means that hunters need to take extra steps to conceal their location and—perhaps most importantly—should remain still. Camo facemasks, hats, and shirts are essential, and all of your hunting gear should be out-of-sight. Using natural vegetation is the best way to conceal yourself, so tucking in behind a screen of ragweed or goldenrod will make for a more successful hunt (provided you aren’t allergic to either plant species). It’s also a good idea to take steps to distract the birds: dove decoys will put the birds at ease and bring them in close for a shot. And, of course, having the sun to your back helps break-up your outline.