The Remington Ammunition Comeback Is Just in Time

After years of disarray, Big Green is nearly back to full capacity making ammunition. The story on the Remington firearms is a little less clear 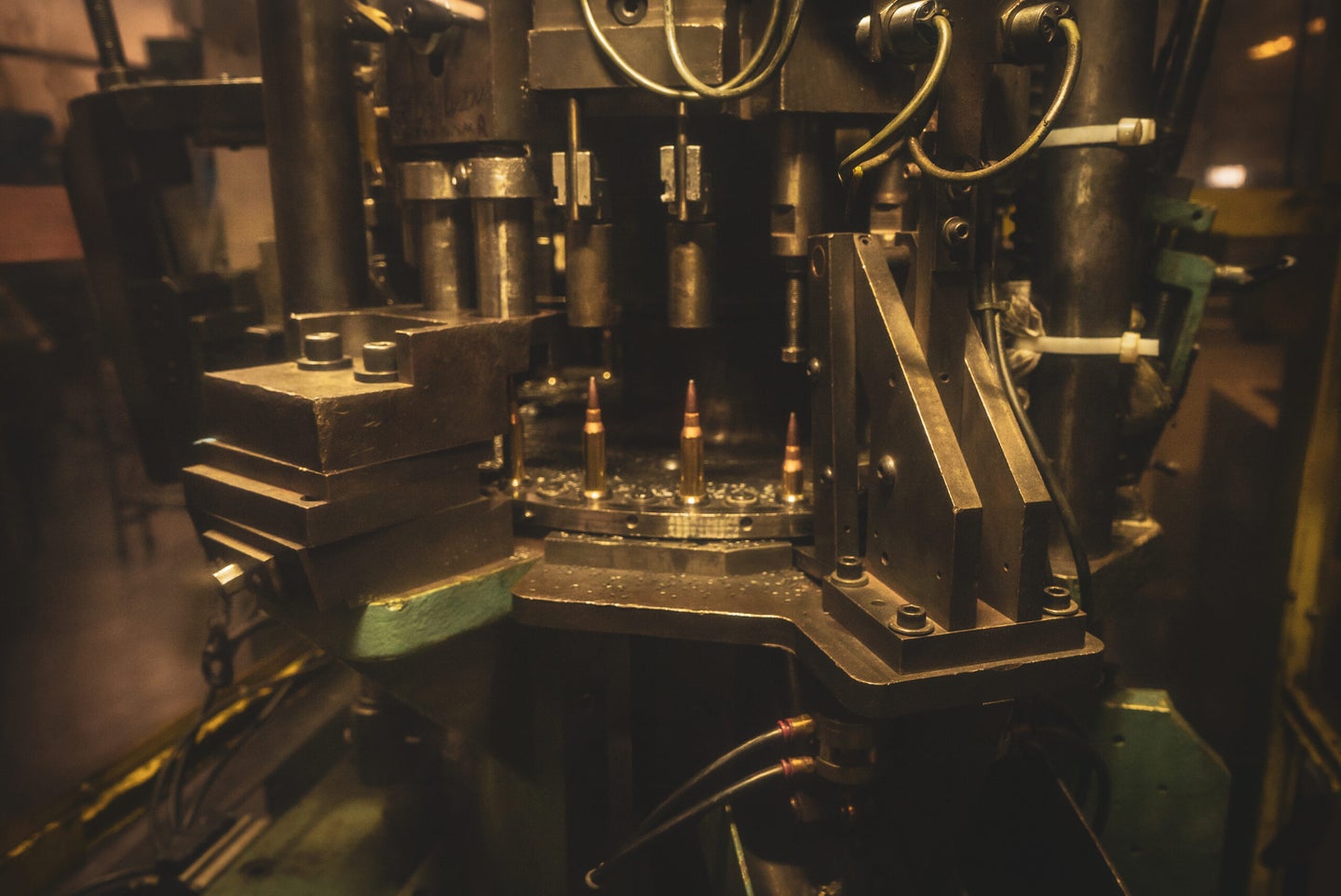 As the ammunition shortage drags on, there’s one bright spot for hunters and shooters: The Remington ammunition plant in Lonoke, Arkansas, is up and running, almost at full capacity. While Remington went bankrupt last summer and sold off its properties in the fall, the factory had all but gone dark. But last month, Remington opened its doors to a handful of outdoor media and we got to the chance to see how ammo was being manufactured, plus interview Remington employees.

Remington ammunition is pushing hard to tell the story of its comeback. Afterall, it’s a more than 200-year-old American company that’s regaining its footing at time when there’s never been more demand for ammunition. But it’s also because they’ve got a bit of an uphill battle. The previous Remington owners, Cerberus Capital Management (and then eventually its creditors), made years of bad financial decisions that hurt Remington’s quality and reputation. Overall, the “Big Green” brand story is still partly tangled up with questions around Remington firearms and lingering lawsuits from previous ownership.

Let’s start with the good news first. Back in October 2020, Vista Outdoor (which owns top ammo brands like Federal Premium, CCI, and Speer) bought Remington ammunition and the Remington brand rights out of bankruptcy. Top Vista executives worked with existing Remington ammo leaders to get their massive manufacturing facility in Lonoke back up and running this spring. They’ve hired (and hired back) hundreds of employees and are making millions of rounds every day. During our tour, we walked past a loading dock of trucks that were ready to be packed with crates of ammunition. Our tour guide was adamant about the fact that the plant was not a storage facility. They were making rounds, getting them packaged, and then shipping them out as quickly as possible.

Nick Sachse, the director of product management, has been at Remington for 29 years and told me the plant is running 24/7 at about 80 to 90 percent production capacity.

“Never in the history of this company has there been more demand for our products than there is today,” Sachse says. “We know that it’s still frustrating that you can’t find our product on every shelf that it was once on. But I’ll tell you this, very soon we’ll be making record levels of ammo.”

Right out of the gate, Remington is focusing on its core products like Core-Lokt hunting loads, UMC range loads, and Nitro Steel shotshells. But in the next month or so, you can expect to see some brand new products from Remington as well.

“I view Remington as a great product at a fair price that gets the job done,” Sachse says. “Which, is why Core-Lokt is the best-selling deer ammunition in the history of America.”

Everyone I spoke to at Remington said that bringing back quality was their main goal. One of our final stops on the tour was a quality control testing area where workers fired rounds through SAAMI spec test barrels to evaluate for metrics like pressure and velocity. Here’s the standard operating procedure: A couple times each shift, rounds are pulled off the production line for testing. If a round fails to meet specifications, production is halted until engineers can identify the problem and figure out how to fix it.

“You’ve heard our president Jason Vanderbrink say we will not sacrifice quality for quantity,” Sachse says. “Could we make more if we didn’t care about quality? Sure. But would we be doing the consumer a good deed? Absolutely not. So, we’ve instilled that [focus on quality] in everyone who’s here. And everyone who is working here wants to be here. They’re people who stuck it out and stayed with the company. What makes a good quality product is someone who has pride in their craftsmanship. So, when you have prideful employees, happy employees, who feel like they have a future and who work for an employer who understand the industry, you’re going to get a better product. That’s what we’re seeing.”

Things are more complicated on the firearms side. An investment company called The Roundhill Group, LLC purchased the Remington firearms factories last fall for $13 million (Marlin, which was formerly owned by Remington, was bought by Ruger). The deal included Remington’s main factory in Ilion, New York, and its handgun barrel factory in Lenoir City, Tennessee. The firearms side of Remington was officially named RemArms.

In May 2021, Times Telegram reported that the Illion plant had hired back 230 workers, with plans for starting production with the Model 870 shotgun line. Around that same time, Adam Ballard, Director of Product Management at RemArms and a 17-year veteran of the firearms industry, did an interview with Field & Stream.

“We are actively pursuing an aggressive timeline to get production started and intend to have our core legacy products [Model 870 and Model 700] on the shelf well ahead of hunting season,” Ballard said in that interview. “Our goal is to be true to our brand and produce first-rate products for our consumers.  While we might not be as big as “Big Green” once was, we believe a significant number of our brand loyalists will be very pleased with our new approach to quality and have no doubt we will continue to be considered a major force.

Hunting season is fast approaching, however, and as far as I can tell, new Remington firearms haven’t hit store shelves. RemArms didn’t respond to a request to comment for this piece.

Joel Hodgdon is the new marketing director for Remington Ammunition and he knows that ultimately, most consumers will still link RemArms and Remington Ammunition, even though they are now two separate companies. Hodgdon is a lifelong hunter of the Hodgdon Powder Company family. He’s been tied to the hunting and shooting industry since he was a kid.

“We need to be careful how we tell the story [of RemArms and Remington Ammunition], because the average consumer is always going to connect Remington ammo and firearms together,” Hodgdon says. “The RemArms folks are going to be a good partner for us and they’re technically our licensee and there’s quality standards in place. So, we’re going to make sure that if they’re going to have our brand on [guns], it’s going to be quality.”

A Recent History of Bankruptcy and Lawsuits

Last week Remington proposed a $33 million settlement deal to a lawsuit brought by nine families of the victims of the Sandy Hook School shooting, in which a gunman used a Bushmaster rifle to murder 28 students and teachers in 2012. Bushmaster was owned by Remington at the time and through the lawsuit, plaintiffs targeted the company’s marketing of the rifle as a combat weapon. It’s important to note that Bushmaster is no longer owned by Remington, and that Remington Ammunition is not involved in the lawsuit.

Amid the pending lawsuit, Remington went bankrupt twice. The story of that bankruptcy is a complicated one, which the New York Times covered in an investigation in 2019 after Remington went bankrupt the first time. The short version is that Cerberus Capital Management, the owner of Remington at the time, mismanaged the company and saddled it with high-risk loans. Remington’s quality slipped over time and it was never able to get out from the debt that Cerberus had borrowed. The company went bankrupt again in 2020 before it was split up and sold.

“Most of the people who work for Remington do it because they are users of the product,” Sachse says. “So, when you go through hard times like we have—and I’ve been here for the worst—it’s important to say that was not a reflection of the employees. And our new owners recognize that.

“When I came to interview here 29 years ago, those machines were running just like they are today. If you look at our new product lineup and the timing for when we’re going to bring new products out, it kind of aligns to those days. Remington ammunition has been through several heydays. We’re in another heyday. The difference is that this time we’re owned by a company that specializes in making ammunition.”