Sure, you can geek out on new or fancy cartridges for hunting sheep and mountain goats. But the truth is: Your deer rifle will probably work just fine 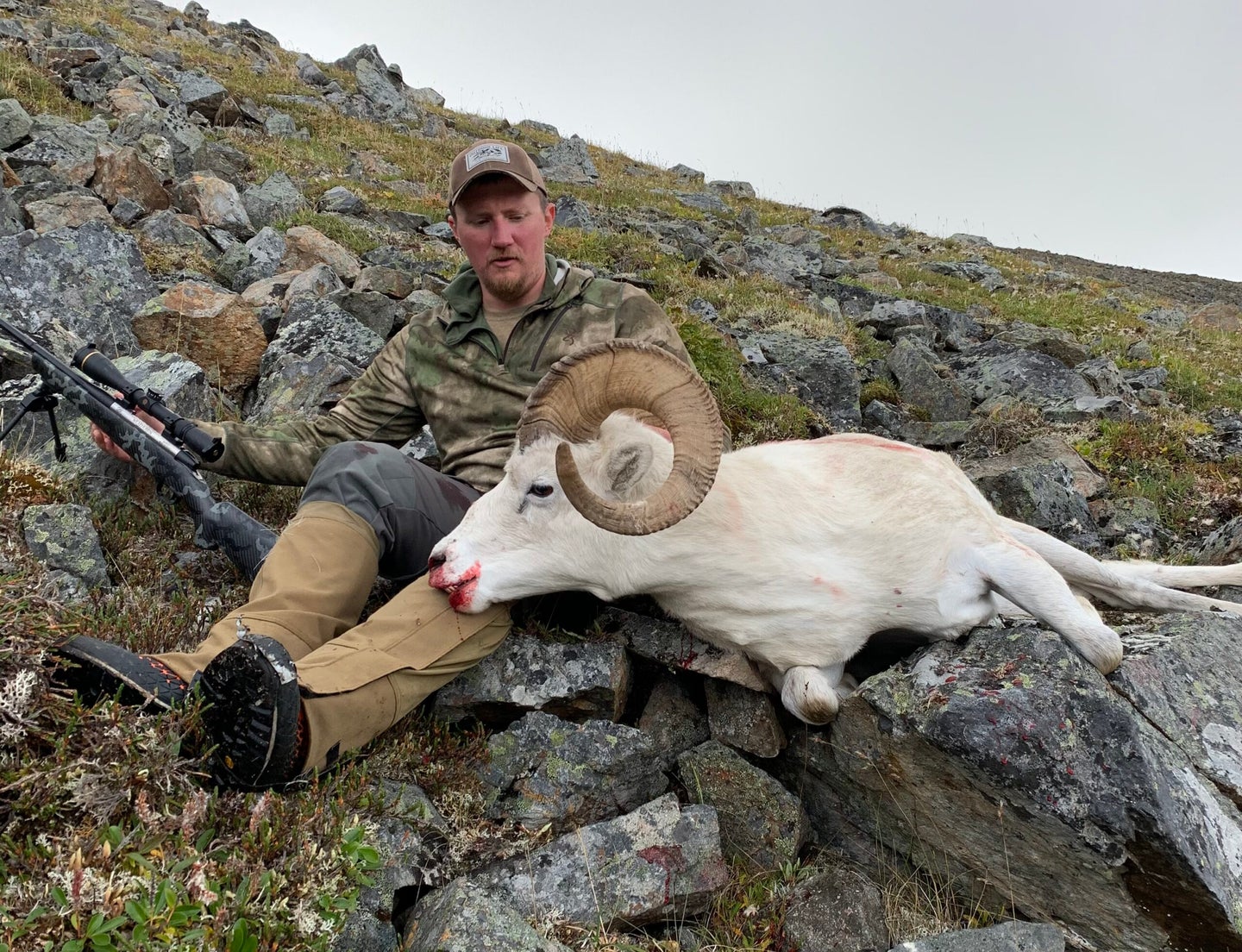 The author with a Dall ram, taken with a 6.5 WBY RPM. Tyler Freel
SHARE

For most people, hunting sheep and mountain goats is a rare and pricy prospect. So when you’ve got a hunt of such magnitude planned, it’s normal to wonder—what’s the best sheep and mountain goat cartridge to use? That’s one of the most frequent questions I see and receive. In fact, that question has been keeping guys like me—obsessed hunters pretending to be writers—out of soup kitchens for the better part of a hundred years.

Since the invention of smokeless powder, a slurry of new cartridges and developments have been unrelentingly promoted for hunters. Some hunters embrace each new offering as the cartridge they’ve been waiting their whole lives for. Others aren’t so easily impressed. Many are completely content to stick with what they know works.

I’ve been hunting sheep for the past 18 years running and have a few mountain goat hunts spattered in the mix as well. I’ve been blessed to have those opportunities, and I’ve seen my hunting buddies take high-mountain game animals with a variety of calibers. So, does your caliber selection really matter when it comes to hunting sheep and mountain goats? No, but also yes. How’s that for clarity?

The Goal of Cartridge Selection

You want to pick a chambering that you can shoot accurately, will be adequate for the conditions, and will do enough damage to kill your target animal quickly and cleanly. With that in mind, almost any modern big-game cartridge has plenty of power to kill sheep and mountain goats cleanly when used responsibly.

There are certainly irresponsible choices. For example, I wouldn’t recommend taking cartridges in the .204, .223, or .300 BLK—you want a little more juice than those will give you. But when it comes to what’s adequate, a sheep hunter thinking they need a .280 Ackley Improved, a .300 WSM, or something even bigger or fancier to be successful is foolish.

Guys like Frank Glaser were killing sheep by the bushel with the once hot-rod .250-3000 Savage in the late nineteen-teens. Frankly, it would still be a fine choice. Glaser claimed a .220 Swift killed hoofed game quicker than any other cartridge he’d ever tried (when the animals were hit with a solid lung shot). I think if you were considerate of wind conditions, the .22-250 with a hot 50-grain, copper ballistic tip would be dynamite on sheep.

In some ways, cartridge selection for sheep and mountain goats doesn’t matter that much. It’s a sure bet that with a good bullet that will hold together, whatever caliber deer rifle you have is perfectly capable of killing sheep and goats cleanly under the right circumstances. In other—often less tangible or predictable ways—your choice of cartridge does matter.

Aside from the physics it takes to kill a game animal cleanly, a hunter must make several considerations in picking the cartridge that they’ll depend on to get the job done. Shots on sheep and goats are often made in challenging wind conditions and at steep shot angles.

Tough or windy conditions don’t mean that you must have an ultra-efficient, high-B.C., modern cartridge—just that you need to understand how those conditions will affect your shot. It’s up to you to stay within your effective range. The flip side is that fast cartridges with high-B.C. bullets offer a higher margin-of-error in challenging conditions.

Another advantage that some of these cartridges have is that they are more efficient and can deliver great down-range performance with reduced recoil compared to many old favorites. One example of this is the 6.8 Western, which has only 5 percent less energy at 200 yards than a .300 Win Mag. That’s comparing the Browning factory 175-grain load to the rock-solid Barnes 180-grain TSX factory .300 Win Mag load. But the 6.8 Western brings substantially less felt recoil. It’s a more compact cartridge with better ballistics. There are lots of great sheep and mountain goat cartridges, but some of the new ones do have advantages.

In general, you’re going to want to select a rifle-cartridge-combo that doesn’t beat you up and is easy enough to carry around the mountains.

Goats Can Be Hard to Kill

One factor that cannot be overlooked when selecting a cartridge to hunt sheep or goats with is the animal itself. Because sheep and goats are generally found in tough country, it’s common to think that both species are tough to kill. In my experience, I’ve found this to be a point of separation between sheep and mountain goats.

For sheep—Dall sheep anyway—I’ve found them to go down easily. A ram might look unphased for a few seconds when hit through the lungs with a .300 WSM, but it’s a temporary deception—he isn’t going anywhere. I’ve seen quite a few rams pitch over backwards within a second or two of being hit with a 6.5 Creedmoor, and I’ve yet to see any ram hit solidly—with any rifle cartridge—make it more than a hundred yards. In picking a sheep rifle and cartridge, I place the emphasis almost entirely on accuracy and relatively mild recoil.

Mountain goats are a different story. They are considerably more resistant to giving up the ghost—or at least that’s been my perception. They have a reputation for soaking up lead, then using their last dying effort to hurl themselves from cliffs into the unrecoverable chasms below. From what I’ve seen, goats certainly are tougher than sheep, but much of their reputation has to do with the generally precarious spots they live in. Most times, it’s inconsequential if a sheep runs 50 yards before expiring, but often that same distance might make a goat un-recoverable.

It doesn’t take much of a rifle to kill a mountain goat, but goats can also seem impossible to anchor. The first goat I killed was with a .375 Ruger, and after being flattened by the first shot and rolling, the goat tried to get back up and I had to shoot it again. The following year I killed a big billy with my .25-06 that took a second shot as well.

The most recent goat I killed was a nanny on Kodiak Island, shot with a .300 Win Mag. At the shot she slumped down, acting like that would be it, then flung herself into the air and began tumbling down the nearly vertical mountainside.

For Goats, Bigger is Better—To a Point

Goat hunting often seems to boil down to finding a goat in a spot that you can successfully shoot and recover it. Sometimes, that recovery hinges on being able to keep the goat from running. Favoring more powerful cartridges will generally help you in this regard—just remember that it still can’t guarantee the outcome.

Many guides will tell hunters to bring the most powerful cartridge they can shoot comfortably—especially for goats. It’s not that these guides are worried about a smaller rifle being incapable, but that they’ve seen things go bad and welcome the extra margin-for-error that more powerful cartridges often provide. How much recoil a hunter can handle is all personal. The .30 magnums and even .338 cartridges aren’t overkill for goats if you can shoot them well.

The more punch your cartridge can pack, the better the chances of anchoring a goat, but goats will be goats, and sometimes it seems nothing will stop them. Even our editor-in-chief, Alex Robinson experienced how tenacious goats can be when the goat he hit solidly with the previously mentioned 6.8 Western load took just a few steps too many.

Years ago, I saw one big billy hit several times with a .340 Weatherby, all in the ribs. Each shot would drop him to his knees, but he’d get right back up and keep pushing forward. He made it approximately 75 yards.

Attempting to pick the perfect sheep or goat cartridge is an ambiguous endeavor that’s clouded with a litany of variables and circumstances. There are many great options and even more that are, at worst, totally adequate. Whatever mountain game cartridge you pick, remember that you’re hunting the situation as much as the animal itself. You need to find that big ram or billy under a set of circumstances that will give you the best chance to kill and recover it cleanly and uneventfully.

Read Next: Aoudad in West Texas: Is the “Poor Man’s Sheep Hunt” Really a Sheep Hunt?

There’s nothing wrong with picking any number of hundred-year-old cartridges to hunt sheep and goats with, and there’s no shame in admitting that some newer cartridge that’s slightly more powerful—or more efficient, or easier to shoot—can increase the chances of a happy outcome.

So what should you choose then? Choose the sheep and mountain goat cartridge that makes you feel good. Seriously. Choose the cartridge/bullet/gun combination that gives you confidence. If you’ve got a lucky deer rifle that never misses, use that. If you’re a cartridge nerd, eat your heart out on ballistics tables, and pick the cartridge that gives you the greatest mathematical advantage—just make damn sure that you can shoot it well in a hunting scenario.

Writers like me often dive deep into the details of guns, gear, and cartridges, but I don’t ever lose sleep over which cartridge to choose for my own hunts—and neither should you.