The Simple Drill That Made Me a Better Pistol Shot 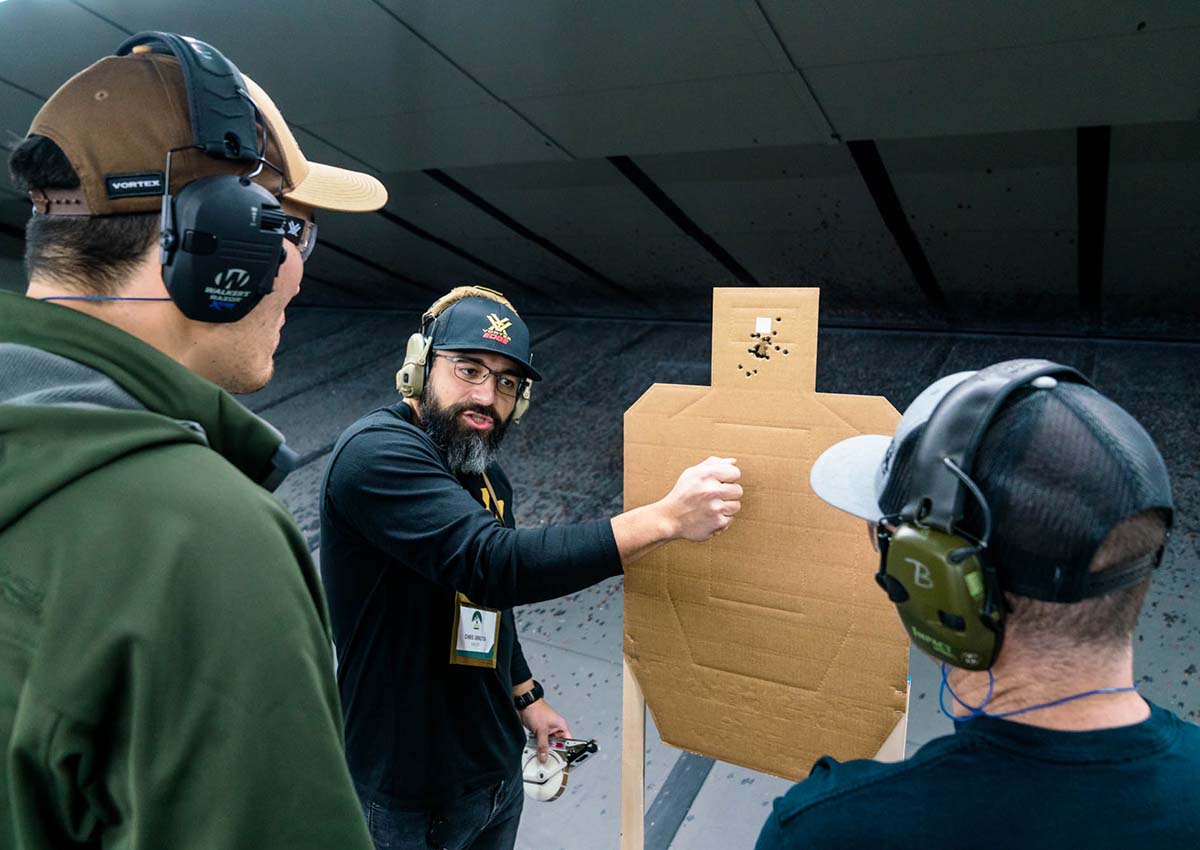 I’ve always struggled with shooting fast and accurately, which keeps me as a mediocre C-class USPSA shooter. But, I recently attended a pistol class at Vortex Edge that fixed an issue I’ve been working on for years—I, like many right-handed shooters, hit low left when I try to shoot fast.

In the first 30 minutes of the class, we did some simple drills and the instructors made two modifications to my grip. I could then shoot fast (.19 to .22 splits) and maintain A-zone (6 x 11 inches) hits at 15 yards. I then progressed to a sub-second (.97) draw with an A-zone hit, another milestone.

If you are also struggling with maintaining accuracy with your pistol while pushing for speed, here are the simple tips and drills to try.

The Vortex Edge instructors, Brennan Brennecke and Chris Urrutia, both master class USPSA competitors, began the class by explaining that you can slap the trigger and stay in the A zone of a USPSA target, even at 30 yards.

I had been taught that you needed to smoothly squeeze a trigger for accuracy so the motion doesn’t shift the barrel’s position. But, Brennecke and Urrutia explained that if you lock a pistol in a vise, you can hit the trigger as hard as you want, and the gun would still shoot tight groups, and therefore a good grip can overcome an aggressive trigger pull.

“I should be able to grip my gun in such a way that I can press the trigger anyway I want without moving the sight out of an A zone at 25 to 30 yards,” Brennecke says.

I was skeptical but willing to give the concept a try. We started with a drill called “trigger control at speed.”

“The premise of the trigger control at speed drill is to figure out how to grip the gun well enough so that the way you press the trigger doesn’t matter,” Brennecke says. “It’s basically a grip diagnostic.”

This is a dry fire drill done with an unloaded gun or with a dryfire training system. Take your unloaded pistol and aim it at something small, about an inch target at 5 yards. Then take the slack out of the trigger and press start on a shot timer set to random delay. If you don’t have a shot timer, you can download a free shot timer app that will serve the same function.

“As soon as the timer’s beep goes off, I want you to smash through the trigger,” Brennecke says.

Pay attention to what your front sight or red dot does after you hit the trigger. Did it move left? Did it move down?

“This drill where we force ourselves to slap the trigger, is good for teaching us how to grip the gun correctly and putting the right pressures into the gun,” Brennecke says. “If we see movement we know we are doing something incorrectly.”

The adjustments to your grip are based on the idea that your gun will move in the direction of the least resistance. It will take some experimenting to find the proper grip pressures for you and your gun, but here are some basic guidelines.

If you’re a right-handed shooter and your sight moved left, you need to increase support hand pressure. Your support hand should squeeze the gun and firing hand like a vise. “I want my left hand squeezing the gun hard enough that will overcome anything that the firing hand will put into the gun,” Brennecke says.

If your sight dips low, you’re likely tightening your ring and pinky finger, on your trigger hand, simultaneously with the trigger finger. The fix is to preload tension on those fingers so they’re already gripping as tight as possible. That way they can’t tighten as you hit the trigger. “I like to feel good front-to-back pressure where the meaty part of my palm is pushing into the heel of the gun and my bottom three fingers are pulling the grip into my hand,” Brennecke says.

You’ll do the same drill again, but this time don’t take any slack out of the trigger.

“This is where you’ll start to see more movement in the sight. When I’m doing a bigger movement with my trigger finger I’m more prone to squeeze with my whole (dominant) hand,” Brennecke says. “As I squeeze with my whole hand that tends to apply pressure to the bottom of the grip with my ring and pinky fingers, which will cause the muzzle to dip.”

Watch for front sight or dot movement again and keep adjusting your grip pressure until you don’t see any movement.

Then take your finger all the way off your trigger so that you wind up and smash it. “This is a little unrealistic, but it proves the point that you can hold the gun in a way that allows minimal dot movement,” Brennecke says. “That to me, is a really fantastic grip, and that’s the grip I’m going to work on getting every time I pull the gun from the holster.”

You can work on this drill in live fire too, but Brennecke suggests continuing your grip work in dry fire practice.

“I’ve learned more about shooting in dry fire than I ever have in live,” he says. “If you can figure out how to press the trigger really aggressively in dry fire and not get much or any movement, you are going to see huge dividends in your shooting.”