Gun Safety: Do You Dry-Fire to Show Clear? Most of the Time It’s a Bad Idea

Is dropping the hammer on your firearm a good safety practice or needless risk? 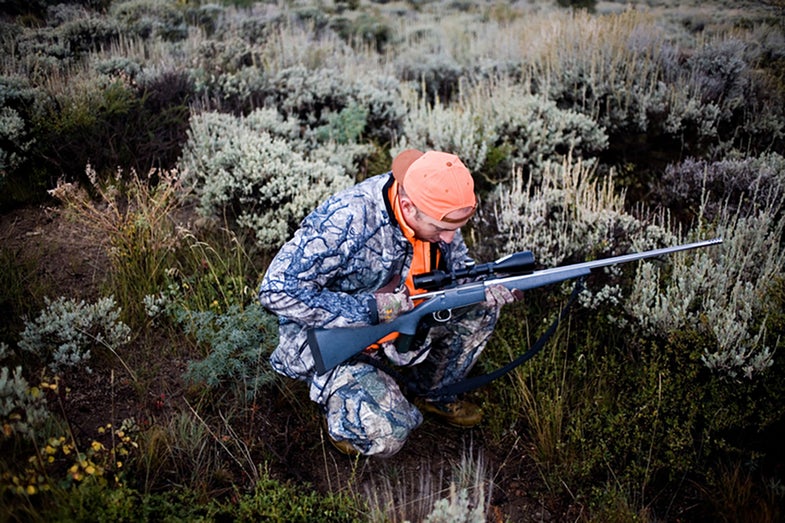 When unloading a rifle in the field make a visual and tactile check to ensure the chamber is empty. There's no need to pull the trigger to verify the firearm's status. John B. Snow
SHARE

It’s a common sight to see someone pull the trigger on the rifle, shotgun, or pistol they just emptied, whether they are finishing up at the gun range or jumping in the truck after the evening deer hunt. The intent is to confirm that the gun is clear. But is that safe gun handling? Or is it a pointless risk?

I think the answer depends on what you’re doing. But I do know some hunters and shooters click their trigger every single time—and that’s not the right approach.

When to Dry Fire

Before getting into those less-than-safe scenarios, let’s talk about when it makes sense. At every 3-gun, multi-gun, or handgun competition I’ve attended, the standard procedure after finishing a stage is to unload the pistol by pulling the magazine, racking the slide, and pointing downrange and dropping the hammer. The Range Officer managing the stage watches this process to verify that the blaster is clear to his or her satisfaction. The same procedure holds true for showing that a long gun is clear.

At a gun range, you can point the muzzle at a solid backstop. If you do produce a negligent discharge when attempting to show clear, it isn’t going to cause any problems other than a potential stage or match DQ. I’ve witnessed this myself and recently saw a video of shooter at a match crank off a round in front of the range officers after pulling the magazine and racking the slide repeatedly. Obviously, he had a round in the chamber that the extractor didn’t engage (perhaps the extractor had broken) and when he dropped the hammer the pistol went off. The fact that he had an utterly safe backstop to shoot into is what prevented it from being a dangerous situation.

When Not to Drop the Hammer

Now out in the wild, the safety of the backstop becomes relative. When you’re exiting your deer stand or hopping into your truck, is it possible to have a backstop as certain as the berm at a rifle range? Sure, in theory. In practice, you won’t have that every single time.

With that in mind, dropping the hammer becomes a risk-reward scenario where it’s often better to not pull the trigger.

Years ago, I discussed this issue with Jim Carmichel, my predecessor as Outdoor Life’s shooting editor. He was firmly in the “don’t dry fire to show safe” camp. “What is it you’re trying to prove?” he said. Good point. You’re trying to demonstrate that the gun is empty—but if it isn’t you just opened a whole can of worms for you and everyone who might be around you.

Some shooters have argued with me that they’d rather have the negligent discharge happen then, rather than risk carrying or transporting a gun they thought had a clear chamber but didn’t.

My problem with this logic is that it ignores the first rule of gun safety: Every gun is always loaded. If someone hands me a firearm I don’t care if they just field stripped the thing and put it back together to show it is empty—I’m still going to check it myself. We shouldn’t consider any firearm, even the deer rifle that just went “click” in your buddy’s hands, any safer than one we just found on the side of the road. To ignore this is to become complacent, and when handling firearms, complacency kills. (It also ignores the second rule, which is to keep your finger off the trigger until you are ready to shoot.)

I’ve seen this complacency crop up in this exact scenario: You and your hunting buddies are gathered around the pickup and casing up rifles or shotguns before the trip back to camp. Someone slides their gun into the case lying in the back of the cab while someone else is on the other side of the truck in line, or nearly so, with the muzzle. That’s a hard no from me dawg. I’ll call it out every time. And if I did that myself, I’d hope that you or whoever I’m with would call me out too.

I’ve been accused of being narrow minded about this. After all, we advocate and practice dry firing at home, don’t we? That’s pulling the trigger on a gun when the backstop, such as it is, isn’t 100 percent safe. And what about appendix carrying a handgun? We’re carrying a loaded gun pointed right at our most prized possessions. Should that be verboten?

Dry-firing does pose a risk, which is why the standard (and smart) practice is to make sure that the room where the dry firing happens contains not one single round of ammunition for that firearm.

As far as appendix carry—or any kind of concealed carry goes—the maxim taught at Gunsite Academy is a good one. That is, holstered gun (or a cased gun) is a safe gun. So in the example I cited above, the better solution is to take the gun case from the truck and case the firearm with the muzzle pointed away from the vehicle and your companions. Once it is in the case, you can consider it safe. A second point to keep in mind for anyone who carries concealed is what my late friend, and Gunsite Academy instructor, Mike Hughes told his students. After completing a shooting drill you should “slowly, deliberately, and reluctantly” holster your gun.

Giving Your Gun the Finger

To really make sure your gun is empty you want to do a visual and tactile check. Just looking into the chamber and down the magazine well isn’t sufficient. The problem is our eyes can (and do lie) to us and we will see what we expect to see (an empty chamber) rather than what’s actually there. The solution is to stick your finger in the chamber and feel for a round. This gives us the opportunity to feel the presence of a cartridge, obviously. But because we have to consciously put our finger in that small space, we will see into the gun better as well and avoid the possibility of glancing without really seeing.

When Is it Okay to Point a Gun at Someone?

Adding to the confusion around gun handling are some Insta-famous influencers and self-styled instructors with massive followings who display atrocious gun handling skills, and yet their fan boys will make excuses and defend them to the last. In one fairly recent incident, a skinny-jean wearing “instructor” swept his students with his AR when demonstrating transitions from a carbine to a handgun. During a live-fire drill he shot a round downrange, then swung his slung rifle around the back of his body like he was trying to get a hula-hoop going before pulling his pistol—all while sweeping the line of students with the rifle’s muzzle.

His excuse was that he was trying to show how not to do the transition (mission accomplished) and that he had put his safety on and the rifle had bolt-locked open, meaning it was safe. His lemming-brained acolytes defended his actions, saying that’s how “high level operators” train and that special operations guys sweep each other all the time. I swear I’m not making this up.

Talk to anyone who’s actually served in those units and see if sweeping each other with your muzzle is okay while training. (Hint: It’s a one-way ticket back to paper-pushing at HQ.)

What never seemed to occur to our fake-it-till-you-make-it instructor and his LARPer fan club is that you could easily demonstrate that skill without pointing a gun at anybody. But it wouldn’t look as sick on video, and those “likes” are everything.

Read Next: Everything You Never Knew About Primers

With that kind of modeling, it’s more important than ever to emphasize the fundamentals of gun safety. And even though it might seem innocuous, pulling a trigger on a gun to show it is clear outside of the confines of a gun range puts us on a slippery slope.