It’s easy to overlook the little things in deer hunting. Here’s what you’ve been missing 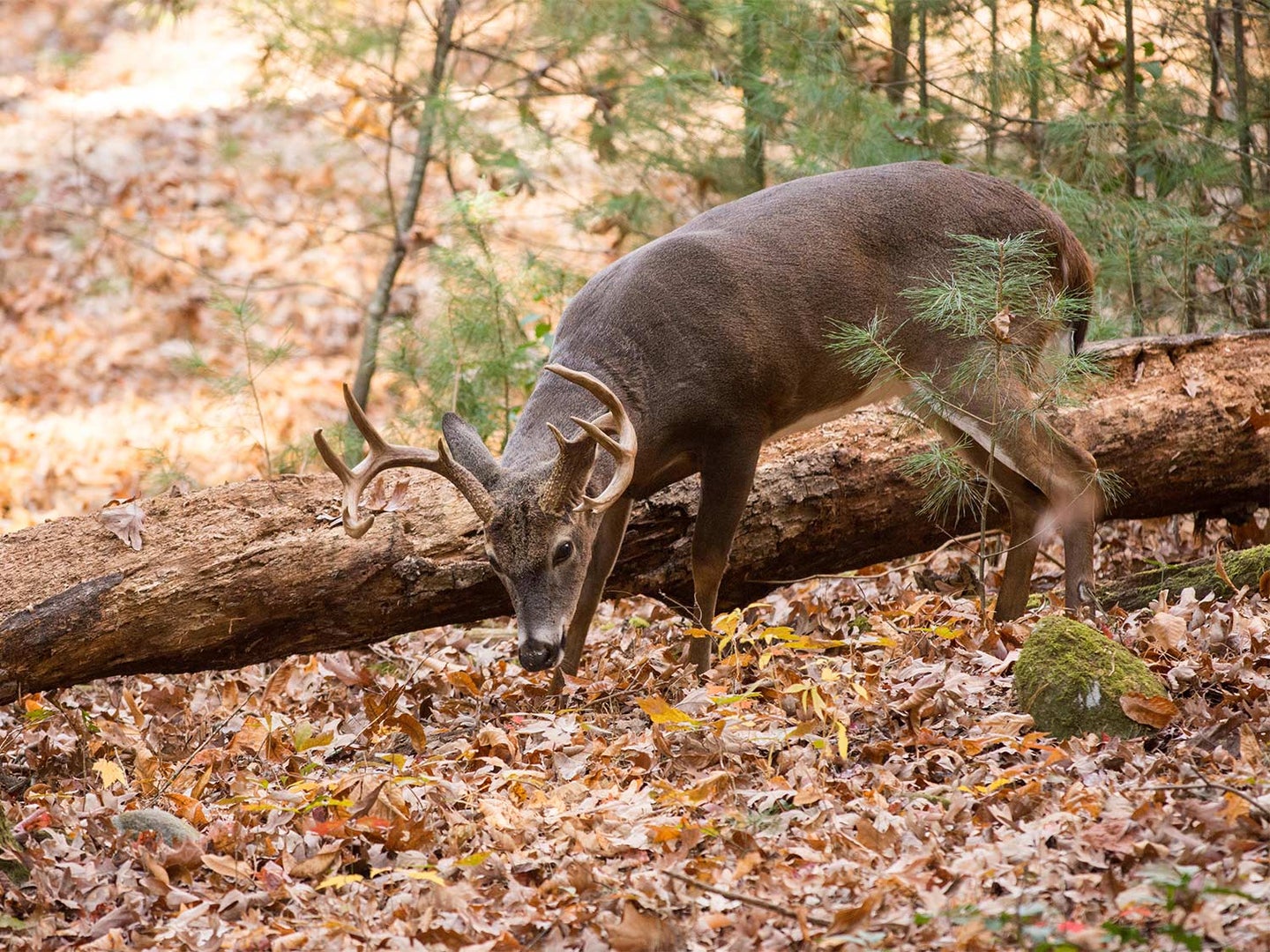 It was dead calm and pitch black at midnight when I stepped outside my deer camp to cool off a bit from the blasting heat of the overstuffed wood stove. Warm is good, hot is not. Sleep never comes easily for me during deer season anyway, but when the stove’s blower cranks ceaselessly it doesn’t come at all. While staring up at the mid-November, star-filled sky, I heard it. From across the desolate country road amid a dense thicket of alders came the telltale sounds of a buck fight. This was not, however, of the knockdown drag-out social-media variety. The light tinkling of antler-tine tips continued for several minutes and I envisioned a pair of young bucks carefully testing each other’s virility quotient after huffing a snoot full of estrous scent emanating from a hot doe standing somewhere nearby. Had I not heard it before, I would have missed a critical clue that clearly pointed to the existence of the two bucks. Though neither might have been the mature whitetail I sought, the likely presence of an estrous doe made me hopeful that there might be one nearby.

The sound of those two bucks sparring was indeed a clue—one of the many simple ones that I would have easily overlooked in my formative years of deer hunting but have nowadays come to regard as the most important ones of all. Here’s a cheat sheet to help you get ahead of the learning curve of whitetail hunting.

1. You’re Not Listening For Deer Noises

Like the sound of those ticking antlers, I’ve come to realize that there are many deer-specific sounds that I completely disregarded through the years. Vocalizations top my list. I was reminded of that last November while in my bow stand.

It was peak chase phase during the rut and while I had witnessed several bucks hot-trailing does, my heart was set on a mature 8-pointer that I had on trail camera. At 7 one morning, I suddenly heard a soft staccato urp-urp-urp. A doe hurried past my stand quickly followed by the mature 8-point. He never passed within bow range and as I replayed the episode in my head, I couldn’t help but think that something seemed very odd. What struck me was the softness of the buck’s grunts, which seemed completely dissimilar to the loud, guttural sounds of a mouth-blown grunt tube. When I thought back on other buck-grunting experiences, I concluded that I’ve probably heard more soft grunts than full-bodied grunts through the years. The sound of deer footfalls in crunchy leaf litter is no different.

Although we ceaselessly cuss noisy, scampering squirrels while sitting on stand, the truth is that the ruckus they raise is actually unlike that of a walking deer. I’d never really thought much about it until I met up with a vendor at an outdoor show a few years back. The product he was hawking was a small plastic sack filled with crinkly-sounding artificial leaves. I couldn’t help but chuckle.

“The way I use this,” he began, “depends on the situation I’m in. If I’m looking at some deer that seem spooky for some reason, I’ll try to put them at ease by trying to sound like a squirrel running through the leaves. I imitate that by crunching on the bag quickly six or seven times in a row. If I’m trying to sound like another deer, I do it more slowly and purposely. If you become an intense listener the next time you’re out in the woods, you’ll notice that deer and squirrels definitely sound different.”

Vocalizations and footfalls are but two prominent deer sounds that I pay strict attention to these days. If you’re tuned in, you can hear deer crunching on acorns or apples, splashing through water, and can even smell them.

2. You’re Not On The Right Food Source

A seminal moment in my deer hunting life occurred in the late 1980s during a conversation with outdoor writer Tim Jones. His advice seemed to run counter to much of what I thought to be true at the time. I had gotten my deer-scouting repertoire all wrong.

“It’s all about The Least Factor,” he said. “For those of us who hunt woods deer, it’s absolutely critical to think about things in this way. In short, what ever favorite food is available in least supply will be the hottest food source to hunt. In a year in which there is an abundant mast crop, but few apples, for example, deer will be on the apples until they’ve eaten every one. In a year with an abundance of soft mast and few acorns or beechnuts, you can bet that deer will be on the hard mast hard.”

Read Next: 101 Best Deer Hunting Tips For The Rut

I’ve tested Jones theory every year since and have found the strategy to be remarkably spot-on. I have taken it a step further, though, to include food plots. When hard frosts kill most native browse, for example, I’m sure to be on my brassica, rye, and oat-filled food plots. This is especially true for the first week or so following the first killing frost of the season. Deer seem to sense that the good greens will not be available for long and naturally shift to cold-hearty greens. Predictably, the same happens if you’ve got access to a turnip or radish plot and get a flop of snow. Being sensitive to ever-changing food sources is critical if you’re trying to stay on top of your deer.

If you take your deer hunting seriously and feel as if weather—snow, wind, rain, wind, barometer—has a bearing on how and where deer move, then you need to put on your best Jim Cantore face and watch the shifting fall fronts with the diligence of a 5-year-old spying a bobber.

“If I don’t see a major drop in temperature combined with strong shifts in the wind patterns, I do not enter the woods,” Cory Wiedel explained in Outdoor Life a few years ago. “I need to prioritize my sit opportunities with ideal conditions. There are certain weather-related conditions that consistently increase mature buck movement during the daytime. My best mature buck sightings and trail cam photos have come when temperatures are cold and there have been large variations in the wind.”

I’ve heeded those words ever since. This past December, approaching conditions in the northeast seemed to mimic Wiedel’s definition of ideal. The mercury dropped hard on a Sunday night and the snow came furiously several hours before daybreak. Although it seemed to be a good day to hunker down and wait things out, I just couldn’t. Deer were on the move early and within the first 20 minutes of shooting light, I’d seen three bucks. The mature 10 point was on the ground by 8 a.m.

4. You’re Not Watching The Other Guys

All hunters understand that hunting public land for whitetails can be a hugely frustrating experience—too many hunters, too few deer, too much pressure, not enough good spots to hunt. Whining, though, will get you nowhere. Trust me, I can gripe with the best of them, however, I’ve also learned to use other hunters to help me shortcut my scouting efforts by simply being observant—if not a bit underhanded. If that black Toyota Tundra is parked in the same spot on Saturdays and Sundays two weeks in a row, you can surmise that its driver is more than likely on a decent buck. Unless I see some hair, blood, or other evidence of a kill near his parking spot, I’ve got no qualms about checking the spot out during midweek. I also pay close attention to the lack of hunting pressure on public lands that were formerly hotspots. If a hunk of heavily hunted public land seems suddenly devoid of vehicles, I’ll look elsewhere.

Remember, too, that the other guys are also watching your every move and can sometimes be quick to move in on your hunting spot. If you’re looking to ward off interlopers, consider the coffee-cup ruse. If forced to park your vehicle in a visible location, save up a few half-full Dunkin’ coffee cups and leave them on the hood or bumper of your vehicle. Get to your spot early and hope that late arrivers will be dissuaded by the thought of a pack of other hunters in the woods.

Whether you hunt in rural or semi-rural areas, recent logging activity should play a prominent role in your whitetail hunting strategies. In areas I hunt in the northeast, the invasion of emerald ash borers has hastened logging activity on both private and public land. While the loss of ash trees is certainly tragic, the amount of lush habitat these ash tree clear cuts have created has been a boon to whitetails.

“They logged off one of our spots called Roundtop a couple of years ago,” says New England deer hunter Martin Cormier. “We always drive the spot during firearms season and typically move a deer or two every few days, but now we’re moving multiple deer almost every day. We might push them out for a little bit, but at night—judging from the tracks—they move right back in to feed on the browse in the cut. It’s really made the spot that much better.”

Loggers are a great source of information and often forthcoming with information on where they have been working and where they’re going to cut in the future. Most of the loggers in my hunting area love to hunt, but rarely have the time to hit the woods. Spend a little time chatting them up, and you can find a whitetail goldmine for years to come.