No bobbers or worms required 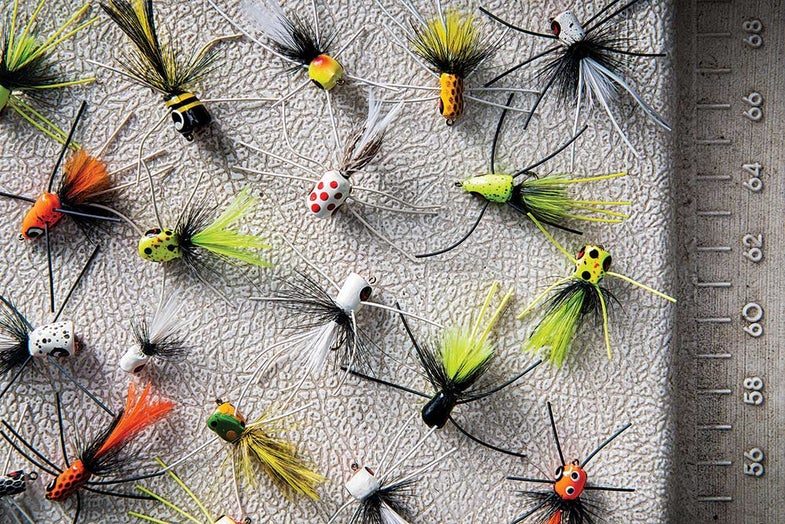 There are certain things that seem to end up in the tackle box of every 7-year-old despite the fact that they’ll probably never get used. There’s a giant red-and-white Dardevle that Granddad says is good for the pike that little you failed to realize didn’t exist in your home lake. There’s a pack of purple plastic worms that are longer than any fish you’d ever caught in your short life. And then there’s an assortment of colorful foam bluegill popper flies. I had at least a dozen at that age, even though I was four years away from owning my first fly rod. Never in those early days would I have forgone a garden worm to fish them. It was simply a colorful collection. Years later, after mastering the basics of fly casting, I learned that bluegill poppers are the fastest way to find the kid in you while honing your grown-up skills. No bobbers or worms required. All you need is a pocket full of bugs, a farm pond, and a few presentation tricks for hours of summer fun.

Work the Bugs Out

Bluegill poppers might be carbon copies of the heftier poppers made for trophy bass and pike, but they represent an entirely different food source. Whereas the bigger flies are supposed to mimic a frog chugging across the surface or a mouse swimming along the bank, their mini cousins are predominantly matching bugs, and bugs simply don’t move with the same urgency as a freaked-out amphibian or waterlogged rodent. Think of the pop of a bluegill bug as a quick attention-getter. That subtle gurgle alerts fish to its presence, but it’s often during a long pause that the popper actually gets sucked under. The rubber legs and hackles on these tiny flies create profiles in the surface film like those of classic trout dry flies, and you should fish them similarly by not overworking a bluegill popper and giving it plenty of time to just sit still between light pops.

Just because a bluegill popper is small doesn’t mean it’s exempt from the air-resistance issues you get with larger poppers. Fishing them on a 2- or 3-weight rod might be tempting, but a 4- or 5-weight is going to provide smoother delivery. Skip light 5X and 6X leaders as well. I prefer casting bluegill bugs on a 9-foot 3X monofilament leader with a 3X mono tippet. This line diameter is thin enough that it usually won’t turn off the fish, and it also acts as an insurance policy when an occasional big bass takes a shot.

Read Next: Tips for Catching Giant Bluegills This Summer

On the rare occasion that those wily sunnies and crappies don’t want to commit to your micro-popper, success is just a dropper fly away. Since bluegill poppers are so light, you can’t use them in combination with a very heavy wet fly, so choose wisely. Zebra midges and red chironomid worms weigh next to nothing and present well just below the film on a short 5- to 6-inch dropper leader. Most of the time, a panfish will eat one of these droppers during a dead stop, simply pulling the popper under like a bobber. If working slow doesn’t seem to be the ticket—which I find happens most often in super-clear water—run a 10-inch dropper made of 3X tippet from the popper to a classic winged wet fly in a neutral color. Work the popper more aggressively to get that wet swimming like a tiny baitfish and wait for your line to jolt tight.