How to Plan a DIY Deer Hunting Road Trip

Out-of-state whitetail hunts don’t have to be expensive, guided endeavors. All you need is a week of vacation and a plan 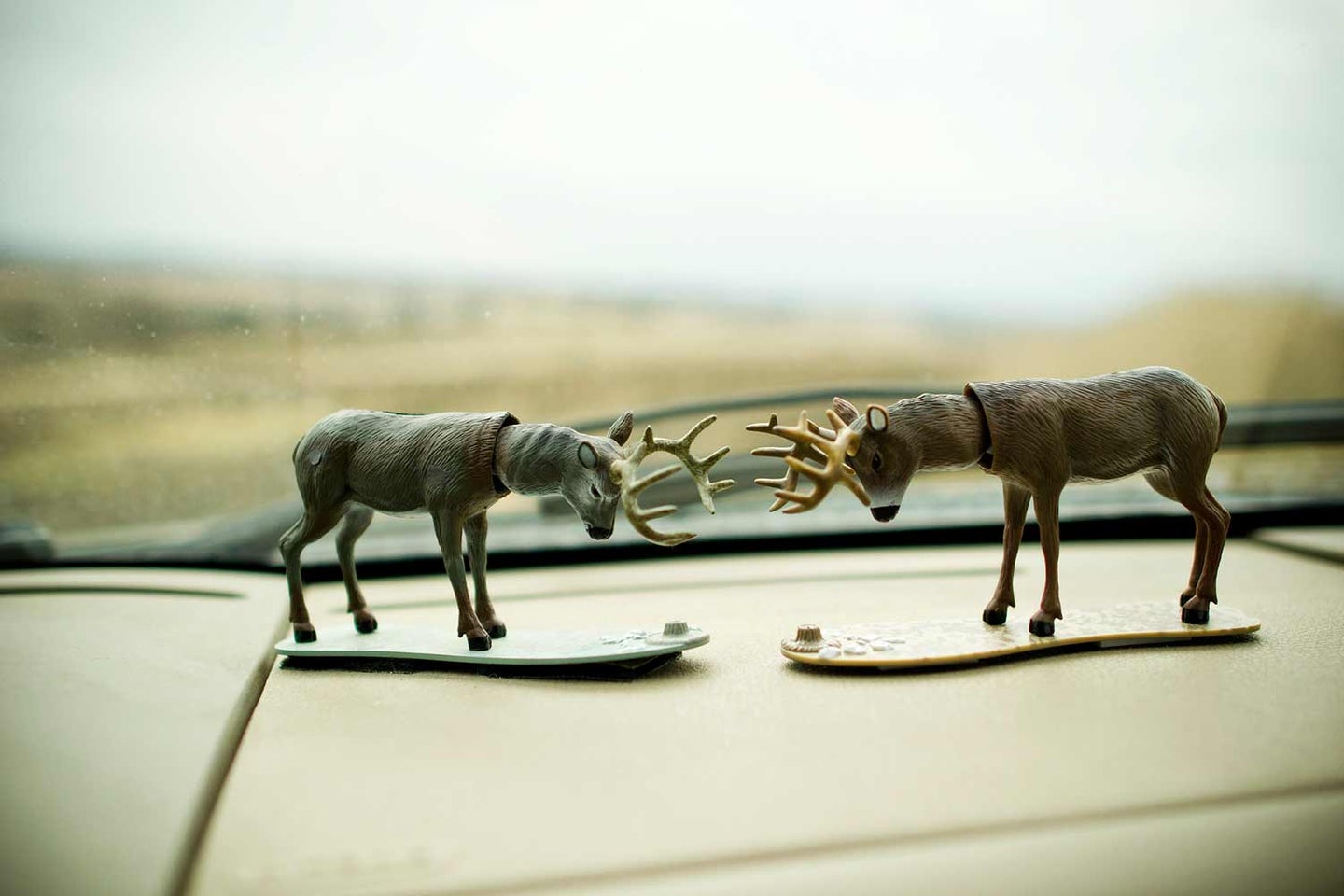 You would think that 10 months of planning and prep work would be more than enough time. And yet here I am, just a few hours away from heading West for a week-long whitetail adventure, and I’m scrambling to get everything packed and loaded. I’d like to say this is abnormal behavior. It’s not. This is how it seems to go each and every fall. And, to be honest, I’m not sure I’d have it any other way.

One special thing about deer season, perhaps the most special thing is the fact that no matter how bad a day is, it will be followed by another sunrise. And that sunrise could bring the best whitetail day of the entire year. A week filled with nothing to do but see what each of those sunrises bring… well, I’m not sure what could be better.

I try to hunt several different states every deer season. Most of those outings are simple weekend, whirlwind affairs. But once a year (twice if I’m particularly lucky), I’ll take a full week-long road trip.

I’ve been taking these out-of-state hunts for about 15 years. These are DIY hunts all the way. I’ll generally hunt public land, but I won’t hesitate to knock on a door or stop by a farmer’s shop to ask permission if an area looks particularly promising. I’ve found some awesome areas and some really crappy ones. I’ve stayed in tents, campers, RVs, cabins, rental houses, and crashed in my truck in Wal-Mart parking lots. Along the way, I’ve ironed out a pretty good system for planning, prepping, and making the most of my time. Here’s how I do it.

This is a pretty basic step, and there’s nothing groundbreaking in the process. I pick an area to focus on and devour as much information as I can. I spend hours looking over aerial images (usually on my laptop in the evenings while my wife watches one of the 2,000 singing competition shows on TV). From the very start, I’m planning not just what areas I want to explore but exactly how I’m going to explore them in the most efficient manner possible. The map work isn’t just a way to learn what areas are worth a closer look, it’s a blueprint for maximizing my time. While you can get a pretty general sense of an area’s hunting potential from an aerial image, there’s nothing that can replace actual time spent on the ground. Obviously, that won’t happen until I arrive. But I use aerial images and maps to identify the most efficient process for scouting those parcels when I do get there. Before ever pulling out of my driveway, I know what areas I’m going to look at first, the order in which I’ll look at them, and the routes I’ll travel to get to them. It may seem like a small thing. It’s not. In many of the places I hunt, the areas worth scouting might be 20, 30, 40 miles or more apart. Heading out without a plan has cost me precious hours before. I’ve learned from those mistakes.

This is another lesson learned the hard way. I used to take way too much stuff with me. The premise seemed sound: Take everything and anything I think I might need, and I’ll never be without the right gear.

Wrong. What happens is you end up with way too much stuff crammed into too little space, rendering just about anything and everything impossible to find. Again, spending 15 minutes pawing through a jumbled mess of gear may not seem like much, but it is time wasted. Repeat it multiple times over the course of a week, and those minutes become hours.

Now I use a system of totes, and I take only what I know I’ll use. My hunting pack contains the essential items—my release aid, binos, spare gloves, grunt call, and a pull-up rope for my bow. I take a single plastic tote for the clothes I’ll wear when hunting. The pack, that tote, and my bow case are loaded into the back seat of my truck. Why? Two reasons: First, I can quickly and easily open the back door and make sure I’ve got what I need to hunt. Second: No matter what else I might or might not pack, I know when I arrive at my destination I’ll have the items I absolutely need to hunt.

Making a gear list is mandatory. I start making my packing list about a week prior to leaving. Any time I think of an item I’d like to take along, I add it to the list. When it goes in the truck (or a tote that then goes into the truck), I check the item off the list. Trust me, if your packing system involves simply opening the tailgate and chucking in things the night before you leave, you will forget something important.

Time is the biggest challenge on this type of hunt. Even with a week, the time will fly by. I’ve got a pretty regimented approach now. It’s a system I’ve developed through trial-and-error, and I’m pretty proud of it.

First, I have a small pack that I picked up at Wal-Mart. It’s a hideous lime green. In that pack are four inexpensive trail cameras, a 30-pack of AA batteries, and a case of SD cards. That pack also goes in the back seat with my bow case and the other must-have items. I wear that pack every time I’m scouting a property on a trip. Once I arrive at my destination, my top priority is to get all four cameras in the field and rolling. Typically, I’m going to hunt in late October or November. Thus I’m looking for fresh, active scrapes. When I find one (preferably a cluster of them), on a parcel that looks interesting, I’ll hang a camera. And then I get the hell out of there. I used to waste way too much time trying to scout and dissect a single property early in the week. If I’m 100 acres into a 1,200-acre parcel and find good sign, there’s no reason to continue looking at that parcel right then.

As soon as I find promising buck sign, I get a camera out, mark the location on my phone and head back to the truck to travel to the next area.

The cameras will tell me far more than I can learn by walking the property on the first day. It’s far better, in my opinion, to have cameras running on multiple parcels than it is to focus too heavily on one unknown area.

Once the cameras are up, I’ll head back to the area that I liked best and hang a stand (assuming there’s enough daylight left. I can usually cover enough property to deploy four cameras and hang a good stand set in about half a day. Obviously, this can and will vary depending on topography and habitat quality, as well as the hunting pressure in an area. Sometimes it takes longer to find a place worthy of a camera or stand. Other times, it takes almost no time at all. But the goal here is simple: By the end of the first day, I want four cameras doing full-time recon.

This was one of the toughest lessons for me to learn. It’s also the lesson that has made such a big difference in my success rates on out-of-state hunts.

I used to want to spend every minute I could in a treestand hunting. This is a mistake. Unless I happened to choose the very best location from the start, I would end up wasting a day or more hunting an area that simply wasn’t productive. Now, I won’t hunt—at all—until I have a high level of confidence that I’m in a location that will produce.

This is where the cameras play a critical role. I can cover a lot of ground in a vehicle over a day, and that means I’ll be able to glass a lot of areas and learn about the deer movement and buck quality. But I can only look at one area at a time, and the prime movement periods only last so long. By relying on the cameras in addition to my own scouting, I can quickly start to piece together a plan of attack. But you have to be willing to devote the time to scouting first. It’s not at all uncommon for me to spend the first two days—sometimes more—covering ground and observing from afar before settling on a stand location and hunting seriously. It’s tough to do—believe me, I know—but it will pay off later in the week.

You might have read about targeting single buck beds, and that mature bucks like to hang out in areas that are away from the core hub of deer activity. That may be true. But that’s essentially the exact opposite approach I take on my DIY week-long adventures. Knowing my time is limited, I concentrate on areas with maximum deer sign. I target the most-used trail I can locate, I look for the single-best food source with the most deer activity. This is especially true when hunting the rut. I want to have the most deer walk past my stand as possible. I simply don’t have the time to target a single buck, and most times I won’t really have any clue as to what bucks are in the area anyway. In order to score in a short period of time, I want to put myself in a position to have as many deer travel by as I can. To me, it’s a numbers game. More deer equals more chances for a big buck to walk by.

The final lesson is perhaps the most important: Deer season comes but once a year. While every sunrise will bring with it hope and promise, the number of sunrises is not unlimited. A week chasing whitetails is a thing of beauty. But it will come to an end. So hunt it all. Focus on every minute of every day. Whether scouting or driving between spots or sitting in camp awaiting the next sunrise, hunt all of it. Enjoy all of it. Every. Last. Minute.