Patience and Obsession Pay Off With a 197-Inch, Non-Typical Missouri Buck

Joe Weimer sacrificed work, and time with family, and friends, all to chase one giant whitetail 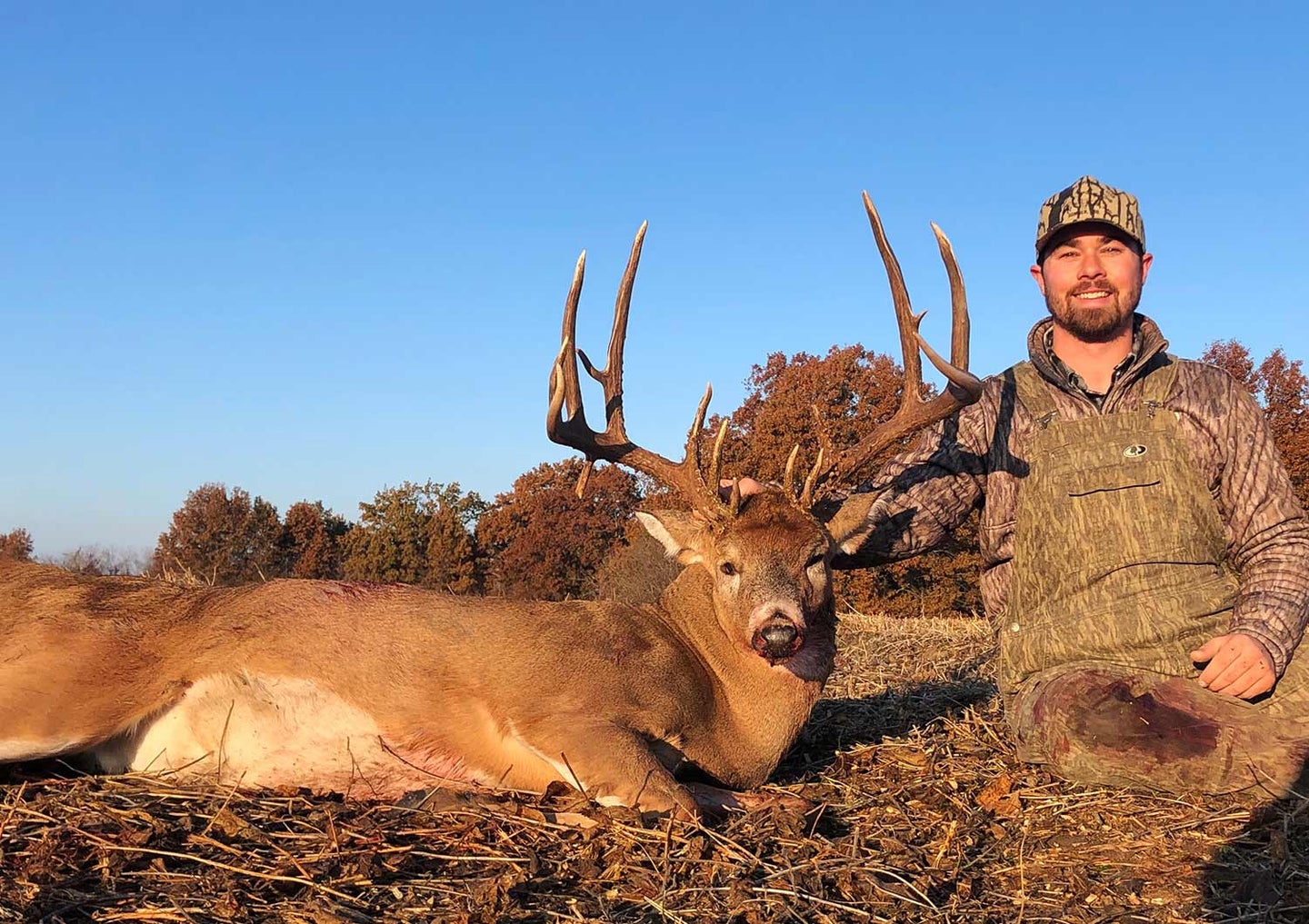 The day Joe Weimer’s daughter was born, he was intensely focused on killing a giant Missouri nine-point he thought (but wasn’t 100 percent sure) was the same buck he couldn’t connect on earlier that season after an arrow clipped a pin oak limb in front of his stand. Weimer had the deer on camera, but had not seen it in months until he spotted the buck on an afternoon goose scout in early January 2019.

There were only days left in the season and a big snowstorm was on its way. It was all lining up. After months of anguish, thinking about where the buck had gone, Jan. 10, was going to be the day. He was in the doc’s office for a routine check on the health of the baby, and couldn’t wait to get the hell out of there, and back in a tree. But plans changed and his lovely—and understanding—wife had to make an emergency delivery.

“I had the stand set and knew where the buck was coming from, but Hillary called and said we had a doctor’s appointment, and it turned out the baby had to be delivered that day,” Weimer said. “Then, after the baby came we got snowed in at the hospital for two extra days, and by then the season was over.”

Ten months later, after a whole lot more waiting, work, downright obsession, and 30 straight days of sitting in a stand, Weimer would finally tag that buck, which was now a 197-inch non-typical. To kill it, he had forsaken everything outside of deer hunting, left friends wondering if he’d lost his mind. Here’s how he did it.

By late October of 2019 Weimer has pictures of the giant buck on trail camera—it was the only deer he was interested in killing. But his worry began in earnest right as gun season approached because the small parcel was next to a gravel road, and he believed the buck was living on the property. That meant anyone could screw up his hunt, mistakenly or on purpose. And in such a rural area, with few homes nearby, he worried a deer of this size might even be poached.

“You just never know what can happen when it comes to a deer like that,” Weimer said. “Where I hunt, it’s out in the middle of nowhere…you don’t think someone would do something like that, but at that point my mind had jumped to every possible conclusion.”

As the days ticked by, the buck ghosted him. It disappeared from trail cams altogether and he never saw it from his stand. Many would-be shooters walked under him, but Weimer was holding out. That made the experience all the more frustrating. He had become obsessed, so much so, that he would talk and text anyone he thought might have crossed paths with the buck…without actually mentioning the buck.

It was maddening. He talked to his cousin, who frequented the local tavern, where deer hunters like to hang out. “Has anybody seen a giant? Anybody heard about anyone else shooting a big deer?” Weimer texted neighbors almost hourly to the brink of annoyance.

“At one point I just decided, I don’t care what it takes, I’m killing this deer,” he said. “It’s not good for my marriage or work, but I am hunting him every day. All day, if possible.”

From there, the pursuit only became more intense. Weimer told his wife to cancel any plans that included him. He moved his stands closer to where he thought the buck was bedding and traveling. He hung stands higher to assure the buck didn’t notice him. He watched wind direction, barometric pressure, moon phase, and weather.

He hunted warm days, cold days, wind, rain, and snow. One morning the farmer next door drove his tractor and tillage tool literally 10 yards from his tree stand. Frustrated, he climbed down, only to crawl into another stand for the rest of the day. By now, Weimer hadn’t seen the deer in 15 days. A winter storm rolled through in early November. He sat through it. All day.

“It was the only option.” he said. “I was doubling down, and didn’t see any other way to do it.”

Finally, Weimer saw the deer. It eased through the woods with 15 does. He hit the big buck with a grunt call and it came trotting in, thrashing trees and pawing at the ground. This was going to be the moment; the culmination of straining relationships and pushing past mental and physical limits. The payoff.

But then the buck stopped behind some buck brush.

It never stepped forward; never offered a clear shot. After weeks of long sits and sacrifice, the damn deer had disappeared—again. How a 200-inch buck finds a way to vanish is forever a mystery.

“I walked back to my truck and puked,” Weimer said. “I mean, I really puked my guts out. Here I am, I look like a damn bum in pajama pants and a sweatshirt (he changed in the field each day). I stink, my wife is telling me I need to use regular shampoo and soap, and this buck comes into range and I don’t have a shot.”

Admittedly, Weimer was losing his mind. The daily frustration was causing him serious mental anguish, though looking back, considers himself lucky to have the time he did to hunt this deer. Outside of hunting pursuits, Weimer is a pretty down-to-earth guy. He runs a thriving marketing and media business. He regularly stops by his grandma’s house to check in on her (and drop off a 12-pack of beer). He’s the kind of guy who would give you the shirt off his back, as long as you don’t mind cutoff sleeves.

Something had to give.

Weimer was back in a stand one evening, and two bucks were fighting in the field behind him. It went on so long that he had stopped paying attention…almost. Suddenly they stopped going at it. Weimer turned around to see the two young bucks staring into the woods, and from the maze of thickets, the giant non-typical buck appeared with 13 does.

On nearly the same path as a week before, the deer angled away, and a grunt from Weimer caught his attention. He came running again, but this time Weimer had a rifle in hand. He had badly wanted to kill this buck with a bow, but it was rifle season and there was no way he could miss another opportunity. Weimer squeezed the trigger. The buck piled up. The hunt was over. Finally.

Weimer can’t exactly explain what happened in the minutes that followed, only that he felt a tremendous sense of relief, elation, and disbelief. He called his dad and climbed down to look at the biggest buck of his life. The only feeling Weimer could relate it to was the goosebumps you feel at the end of “Field of Dreams,” when Ray Kinsella asks his estranged father to have a catch. Except instead of a long line of car headlights, it was just one neighbor crossing the field in a pair of old Wranglers, shinning a flashlight to get a look at this giant.

Word traveled fast that Weimer had finally killed his buck. Friends and strangers showed up to his buddy’s shop to see the deer that had caused him such anguish; had taken him away from mornings with buddies in the duck blind and best friend Rosie (his Labrador retriever).

“It was like a weight was lifted off me,” Weimer said. “I really had no idea how many people had realized how hard I was hunting. I reckon they knew it was a big one…and when I brought him home, it turned into a big party.”

You might ask: Was it worth it? Well, just weeks after shooting the 197, Weimer sent a text. Another booner was on the trail cam.

“As a deer hunter, you dream about even seeing a deer like this. It doesn’t happen often, and having the chance to hunt this buck was almost surreal in itself,” Weimer said. “I’ve had a lot of folks tell me I might as well give up because there’s no way I’ll ever tip a deer like this again. Maybe not, but I’ll damn sure be trying!”