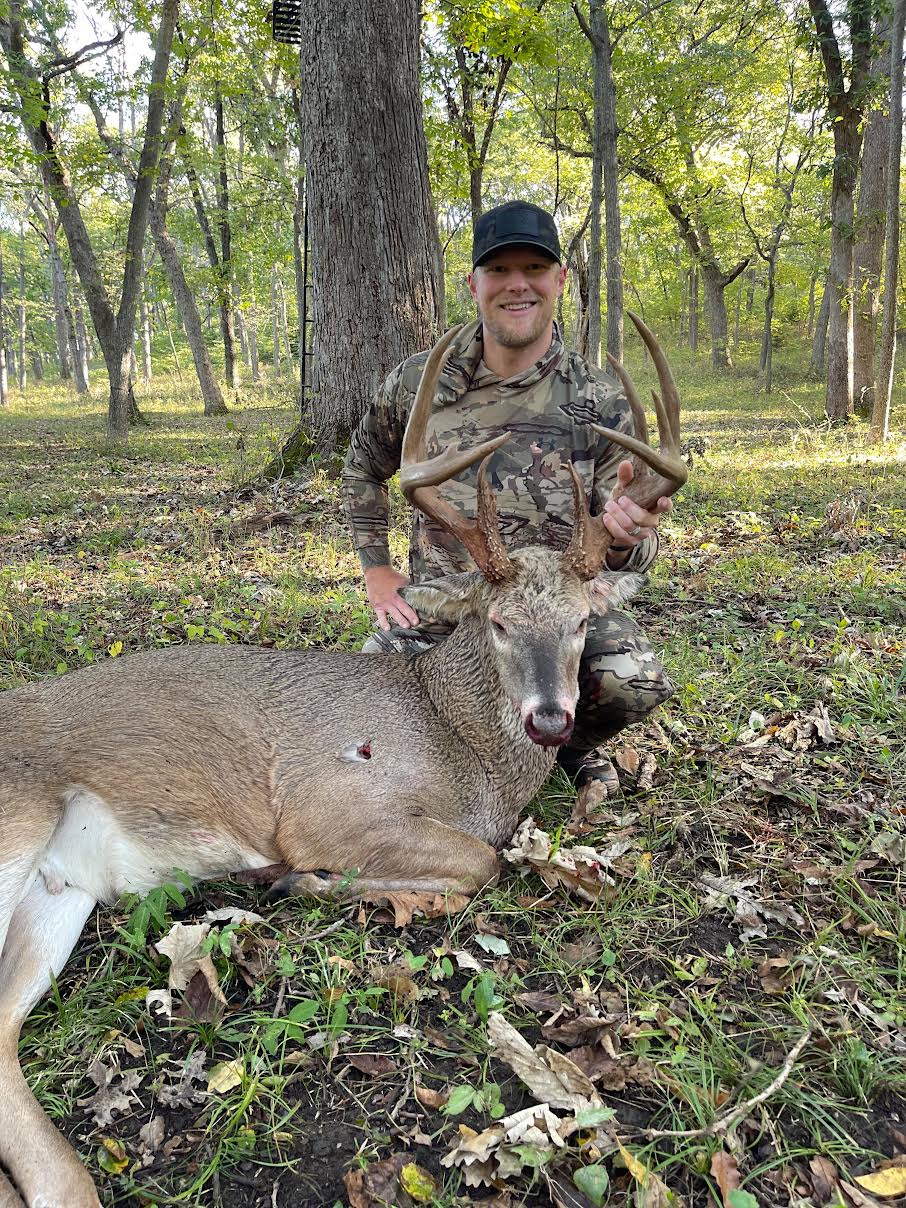 Eric Wells, 33, is a Kansas native, but only started bowhunting deer four years ago with his wife’s brother and father near their home in Lawrence, located between Topeka and Kansas City.

“They kind of pushed me into going with them to their central Kansas [hunting] lease,” says Wells, owner of a personal training business. “I bought a crossbow, and went out there having no idea what I was doing. I shot a small 7-pointer on the last day of the hunt, and I got fully hooked.”

The next season Wells arrowed a 159-inch, 10-pointer on a small 10-acre plot of Kansas land near Lawrence with his crossbow. The next season he got a compound bow and arrowed a 135-inch Kansas buck on a 65-acre private farm. He followed that with a 145-inch buck in 2020 on a private 900-acre parcel. This year he was determined to target a much bigger buck he on that parcel. He’d nicknamed the deer “Ronnie.”

“Last year I went into the 900-acre area after Ronnie, but I never actually saw him on the hoof [only camera photos] because I shot the 145-incher on Sept. 26, 2020,” says Wells. “I just couldn’t pass that deer [145-incher while hoping for Ronnie]. So once I got cameras back up this summer [2021] I was really hoping Ronnie would still be around, and much to my pleasure he started showing up on camera again in mid-July.”

Within the sprawling 900 acres Wells hunts, he targets only about a 10-acre portion of the timber within a deep valley with lots of oak thickets and a creek running through its middle.

“The landowners have feeders up throughout the entire property, including the 10-acre section I hunt,” says Wells. “In Kansas, if you don’t have feeders or agriculture on your ground you can bet your neighbor does. So you have to do what you can to keep good deer on your property. Luckily the 10-acre section I hunt also drops a ton of acorns. So a lot of deer don’t even come to a feeder once acorns start dropping. It’s a really nice [10-acre] piece because deer bed to the north, east, and west, and I enter [for hunting] from the south.”

This fall, Ronnie was active on Wells’ hunting property and the buck had added a huge amount of antler mass.

“He was consistently showing [on camera] during the mornings through most of July, August, and early September,” says Wells. “I tracked the wind, [barometric] pressure, temperature, moon phase, pretty much everything trying to figure out Ronnie’s pattern. But he wasn’t predictable.”

Wells figured the best chance to take the buck was early in the Kansas bow season, starting Sept. 13. He hunted the spot eight times from the bow opener into October. He spotted the buck once, but it never came close. Yet Wells got remote photos of the buck near his tree stand every time Wells wasn’t in it.

Finally, one day Wells had the buck coming to his stand, he drew his bow with the deer at just 15 yards. But the buck caught movement and he bolted away without offering a shot.

“I was sure that was the last time I’d ever see Ronnie,” Wells says.

Wells watched his remote trail camera photos for the next 10 days, and to his surprise, Ronnie returned. Wells decided to switch tactics and decided to hunt from a fully-concealed pop-up ground blind, which he placed in the same area as the tree stand. He brushed up the blind, and let it sit for a few days.

On Oct. 14 Wells hunted the pop-up blind following two days of hard rain, with a cold front moving in with temperatures dropping into the 40s.

“I got in the blind just before 5 a.m. and walking in I bumped a deer out of the area,  which I have never done before,” Wells says. “I didn’t see the deer, but it sounded very heavy-hoofed, and in the back of my mind I thought for sure I had just bumped Ronnie out of there.”

READ NEXT: Will Kansas Become a Preference Point State for Whitetail Deer Hunters?

Wells settled into the blind, and for an hour in the dark he listened to bucks clacking their antlers fighting. He thought it could be the morning to tag Ronnie. At first light a spike showed near the blind, followed by an 8-pointer, followed by four more young bucks. Soon Wells was surrounded by seven different bucks all within 15 yards.

“At 7:30 a.m. all the bucks got nervous and scattered a bit,” said Wells. “I could hear footsteps behind the blind and I thought for sure it was Ronnie. Sure enough, it was him, but there was no way I could draw my bow to shoot with so many other bucks close to my blind.”

A few minutes passed and the buck walked off a bit, and the smaller bucks settled down.

“I kept telling myself this is why I watch trail camera photos so much,” Wells said. “I have watched him so much on camera that I knew he likes to come in to eat then walk the perimeter area to browse acorns, then comes back. So I stayed patient and sure enough five minutes later he chased off three other smaller bucks and was the only one feeding near my blind.”

Ronnie was slightly quartered away at 18 yards when Wells took the shot.

“I knew instantly I torched him,” says Wells. “He ran about 30 yards and hopped a fence, barely making it over. I knew he was hurting bad. Once he got to about 60 yards he fell down the side of a creek bed and I heard him crash into the stream.”

Wells had made a perfect shot, with his arrow penetrating both lungs and heart.

“I knew the buck had developed great antler mass over the last year, but when I was walking up to him for recovery I couldn’t believe how heavy the beams are,” Wells said.

The buck is estimated at over 250-pounds, and though official measurement of the rack will be made after the required 60-day drying period, it was green-scored at 168 3/8 as a 9 point with 42 total inches of mass measurements.