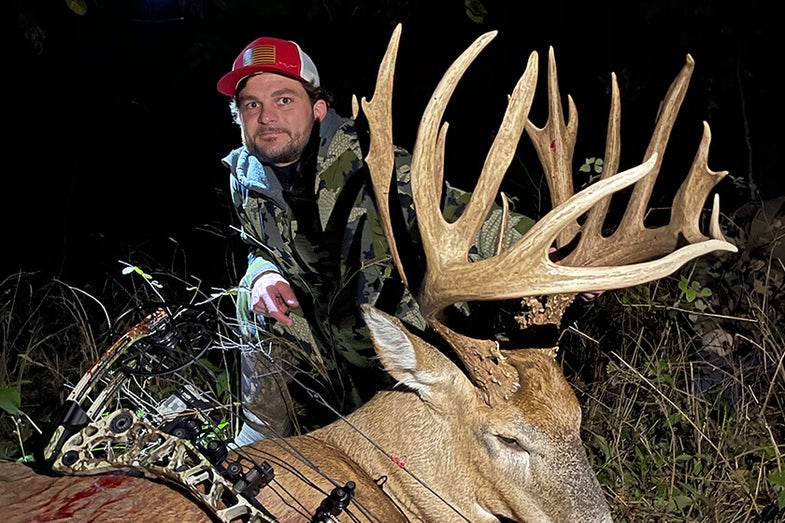 With a greenscore of 245 inches, the Somers buck will likely make the Boone and Crockett record books. Marc Somers
SHARE

“We have about 15 different properties in Kansas, not for outfitting or guiding, but for our personal hunting and for taking friends from around the state and outside the area,” says Somers, 33, an assistant manager of PrimeTime Grill in Kansas. “My buddy Cody Larrimore and I got permission to hunt an 80-acre farm and started putting cellular trail cameras up last summer.”

The pair of bowhunters knew it was likely a prime whitetail spot because Larrimore, 34, arrowed a huge 205-inch buck last year on another farm only 30 minutes south of their spot.

On July 21, they got the first photos of an incredible buck still in velvet on the new 80 acres. The buck was naturally impressive in velvet, since velvet always makes a rack look more massive. But the pair of experienced Kansas deer hunters were amazed that the deer’s headgear seemingly didn’t diminish in size even after rubbing off its velvet to reveal hard antlers.

“He was a giant, and very smart, using the wind 24/7 and almost always alone,” Somers says. “He wasn’t camera shy, but he would disappear for weeks at a time. We’d get photos from several different cameras, then he’d just disappear.”

Somers nicknamed the deer “Larri” after his friend Larrimore, who he credits for all his deer hunting knowledge and success.

The pair of hunters had learned from Don Higgins of Higgins Outdoors that the only sure way to get a chance at an older, bigger buck like Larri was to move carefully, quietly, and rarely into the deer’s core area for scouting and hunting.

“Discipline was the hardest part of taking this buck, because he was so wary, wind-smart and cautious,” Somers says. “We stayed out of the farm right until we started hunting him because we didn’t want to rush in and bust him from his usual routine in bedding and feeding areas. We didn’t know much about the property, so we were very cautious going in, and getting out quickly to avoid bumping the buck and maybe [making] Larri leave the farm…I think not knowing the farm well, and taking our time setting up and executing the hunt the way we did, is the chief reason we got him.”

The hunters worked as a team, with Somers as the shooter and Larrimore working multiple cameras to record the hunt. They set up a slightly elevated blind Sept. 1, and were careful accessing the spot by walking in along a railroad track that bordered one side of the property. Somers believes the buck bedded in a thick area off the farm on the opposite side of the railroad track.

Because Larri would show up on camera for a couple days, then disappear for weeks at a time, the hunting team placed Ani-Logics deer attractant near the blind to draw and hold the buck on the farm.

“He loved the Ani-Logics, Larri just gorged on that stuff,” Somers says.

The blind area where they set to take Larri often had a swirling, unusual wind. So the buddies had to be selective as to when they hunted the spot. They hunted the place only four times from Sept. to Oct. 15. On Oct. 15 they got into the blind about 3 p.m., and as they headed in they put a lot of Ani-Logics out near the blind.

During all their other hunts they only saw a few distant deer, and never the buck they hoped to see. They knew Larri was still in the area from trail camera photos, but their blind was set well back in cover, offering only a narrow open window for shooting.

Well after 6 p.m., Larri finally showed. He moved directly to the Ani-Logics and started feeding. It was the first time the hunters had actually seen the buck on the hoof. Now he was standing at 25 yards.

Somers drew, but just then the bucked turned its body away, offering a poor shot angle. Next, Larri turned and looked directly at the hunters in the blind.

Somers had to freeze at full draw for minutes, then had to let down his bow. He was coming out of full draw when Larri turned his head away. The giant suddenly became skittish. The buddies couldn’t tell why at the time, but they later learned from trail camera photos that four coyotes showed about 50 yards away behind Larri.

Finally, the coyotes moved away, Larri returned to feeding on Ani-Logics again, and offered a broadside shot for Somers at 25 yards.

Somers drew, aimed, and released his arrow, hitting the deer behind the shoulder.

The giant buck bolted from the area, and the two hunters were overjoyed after pursuing the buck for four months.

They found Somers’ arrow and a blood trail. But they decided to leave the area quietly, check camera videos, and call Somers’ brother Matt to help them track the deer.

They arrived back at the blind about midnight, picked up the blood trail, and found Larri dead only 70 yards away. Somers’ arrow had passed completely through the massive buck’s chest, hitting one lung, the liver, and exiting on the far side.

The field-dressed buck weighed 274 pounds on a farm scale, with an estimated live weight over 340 pounds. Somers’ first bow buck is one destined to rank high up in the record books. The deer has 21 scoreable points, with an estimated green-score of 245-inches.

“My eyes filled with tears in the blind that evening with Larrimore after I’d shot the buck,” says Somers. “It’s the most humbling, rewarding and meaningful thing I’ve ever experienced hunting. I learned how smart mature whitetails are, what friends are willing to do for each other, and how much I value the chase of whitetail deer.