Lyndzee Rhine was the first one in her hunting party to spot this elusive 200-inch buck. She made the opportunity count 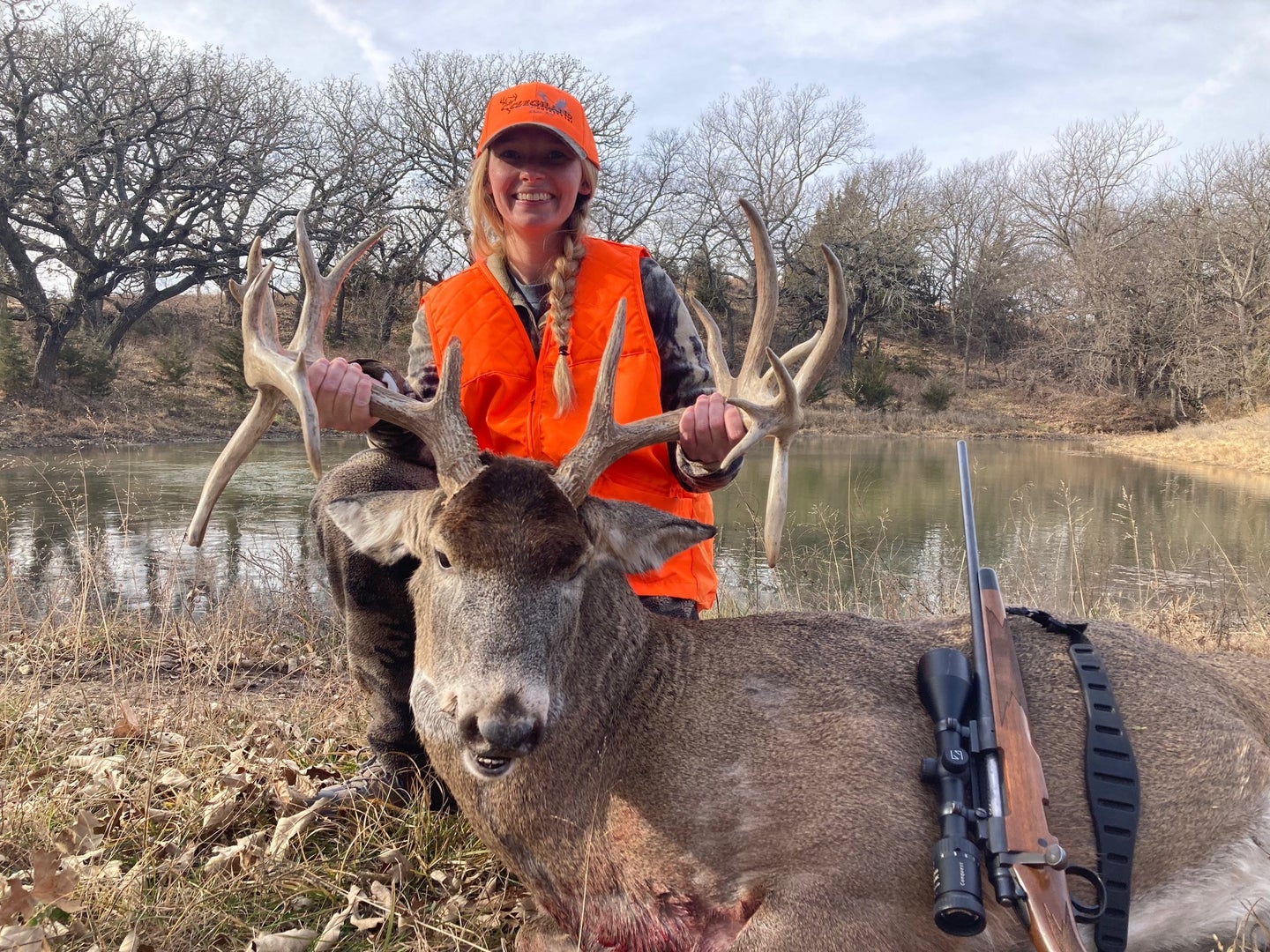 Before daylight on a cold Dec. 6 morning, Lyndzee Rhine, 29, settled into a stand overlooking a draw on a 160-acre tract of hunting land in north-central Kansas. Rhine is the Outdoor Skills and Recruitment Coordinator for the Kansas Department of Wildlife and Parks, and she’s had plenty of deer hunting experience. But she’s never encountered a buck quite like the one she was about to see.

Rhine and her family and hunting partners knew a giant buck was living on their property from trail camera photos captured over the span of a few years. The buck was a special one. They believed he was the offspring of another giant buck taken from the same property four years earlier. But no one had actually seen the buck on the hoof. He’d been too elusive.

At about 7:30 a.m. a pair of does stepped out of the draw Rhine was hunting, and headed off toward some CRP land. They were more than 250 yards away, but it was still a good start to the morning. Then, 20 minutes later, the huge phantom buck stepped out into the open on a grassy hill at 275 yards.

“We knew he was living in the draw, but he’d never come out even during the rut until that morning when a cold front hit,” says Rhine. “He was so far I was a little hesitant about taking a shot at a great buck at that range. But my Remington .280 was ready.”

Rhine leveled her rifle, and squeezed off a shot. The shot felt good, and the buck ran off. She immediately contacted friends and family members. Soon enough, her dad, uncles and friends showed up to help track the buck.

“Initially, the trail was difficult to follow, because there wasn’t much blood,” says Rhine. “I’d never shot a deer from that distance, and I was worried that maybe I’d just wounded him. But once we found the trail and started on it, we found more blood and it became easier to stay with him.”

The buck covered 400 yards before falling, despite the fact that the .280 bullet had crushed the buck’s shoulder and lungs before exiting its neck.

“He was tough, and big, with an estimated 300-pound weight,” Rhine says. “When we skinned him his entire shoulder was just shattered. How he went so far is just unbelievable.”

The 16-point buck was estimated at 5.5-years old, with a green non-typical gross score of 217 inches. Next, Rhine got busy butchering the buck and stashing meat in the freezer, plus hunting with her 19-year old sister Gracie.

“I was just at the right place at the right time to take this great buck,” Rhine says. “Now all I want to finish this great season is to help my sister Gracie get a deer, too.”