After his son was diagnosed with a serious disease during deer season, bowhunter C.J. Garrett doubled down on hunting the big buck they'd been tracking 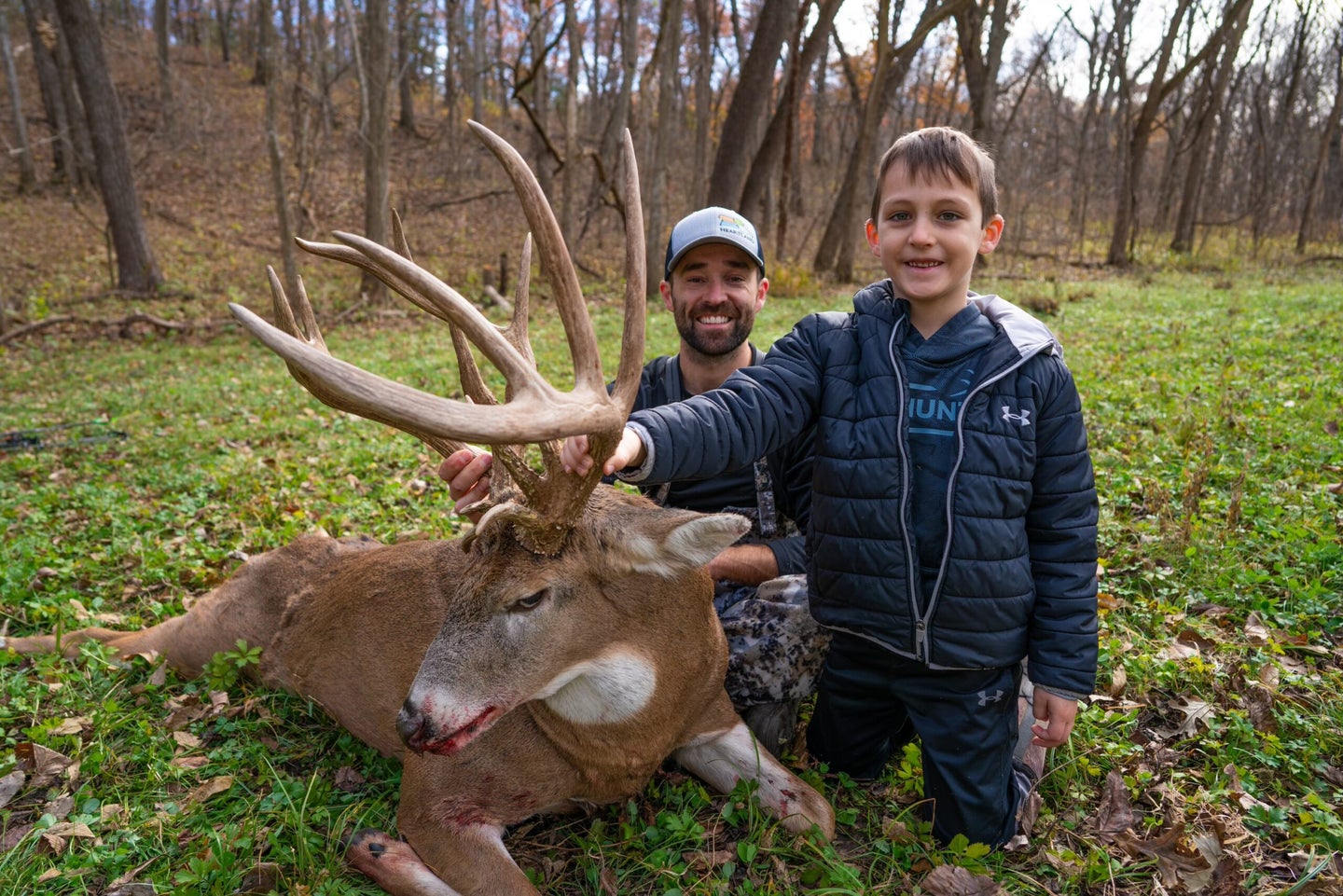 C.J. and Grant Garrett with a buck that they will never forget. C.J. Garrett
SHARE

It takes a lot of discipline (and big-buck experience) to pass four good bucks (each scoring over 140-inches) while waiting for one buck in particular to offer a good shot. But that’s what C.J. Garrett did the morning of Nov. 13 while hunting his 90-acre farm in Douglas County, Kansas.

“I bought that farm in March for family hunting, particularly for my 6-year-old son, Grant,” says C.J., a 33-year-old real estate broker who lives in De Soto. “Grant took a nice 7-point buck in September with his crossbow, but recently he was diagnosed with Severe Aplastic Anemia, a disease in which the bone marrow fails. He’s my best friend and hunting buddy, and he missed out on hunting the giant buck we’ve been tracking on our farm with trail cameras.”

C.J. focused on the massive buck, patterning the deer, and learning his every move. Grant was part of the hunt until his illness sidelined him.

“I want this Kansas buck to catch the eye of people who can help Grant,” says C.J. “There are over 4,000 people awaiting donors for life threatening conditions, like my son, without a matched donor. This deer is dedicated to Grant’s fight with AA, and I told him I’d call him the minute I arrowed the buck.”

C.J.’s business has him looking at Kansas property daily, and he chose that 90-acre spot because it adjoins other good farms with an ideal mix of crop fields and timber, plus it’s close to his home. In the spring, he began working on the farm and planting food plots. It didn’t take long before he learned of a huge buck on his farm—by finding its shed antlers in March.

“I contacted a neighbor and learned they were hunting the buck for three years, but had never actually seen the deer,” says C.J, who has been bowhunting since he was 10. “I got trail cameras out and started getting lots of photos of him in velvet all through May and June. Then he just disappeared, and I never saw him again on camera until Oct. 30, working a scrape. I knew he was big, but I didn’t know how big.”

C.J. says by the first week of November he had the rutting buck figured out. The deer was using a very tight core area, living on only about 40 acres of the farm.

“I got photos of that buck every dawn and dusk from Oct. 30 to the day I killed him,” says the veteran bowhunter, who had three bucks each scoring over 180-inches to his credit. “I just bided my time waiting for the wind to be just right before I got close to hunt him—trying to stay away from his core area as much as possible.”

On Nov. 10, the conditions were good for an evening hunt on the farm, and C.J. spotted the buck.

“I saw him three different times that evening, but he was just too far—65 yards—for a shot,” he says. “I grunted him back toward me but he was still too far.”

Three days later conditions were right again and C.J. climbed into a Lone Wolf hang-on stand. That morning four bucks 140-inches or better walked to within bow range of C.J. and he passed them all waiting for the bigger buck. At 9:15 a.m., the giant deer showed.

“I looked up and he was coming down a ridge right to me, moving along steadily looking for does,” C.J. remembers. “I watched him work a scrape at 35 yards, and he came right to me and stopped at 20 yards, broadside.”

C.J. drew his Elite Ritual 30, and sent a 4-blade fixed broadhead through the deer’s heart. The buck ran 30 yards and C.J. watched him fall.

“I immediately called Grant and told him I got the big buck, and he was overjoyed,” C.J. says.

Grant, his grandfather Jim Buttron, and a friend Clayton Coyle drove out to meet C.J. and recover the buck.

“I took Grant to the spot where the arrow hit the buck, and he tracked the deer right to where he fell,” C.J. recalls. “It was a great moment for all of us.”

“I dedicate this deer to my favorite hunting partner and buddy, my son Grant, who I hope will be hunting with me for many more years.”

Want to share your own deer story from this fall? Email us at letters@outdoorlife.com for a chance to be featured.