Avery Branden could have hunted with a crossbow. Instead, he shot his compound all summer, and tagged this stud buck in the fall 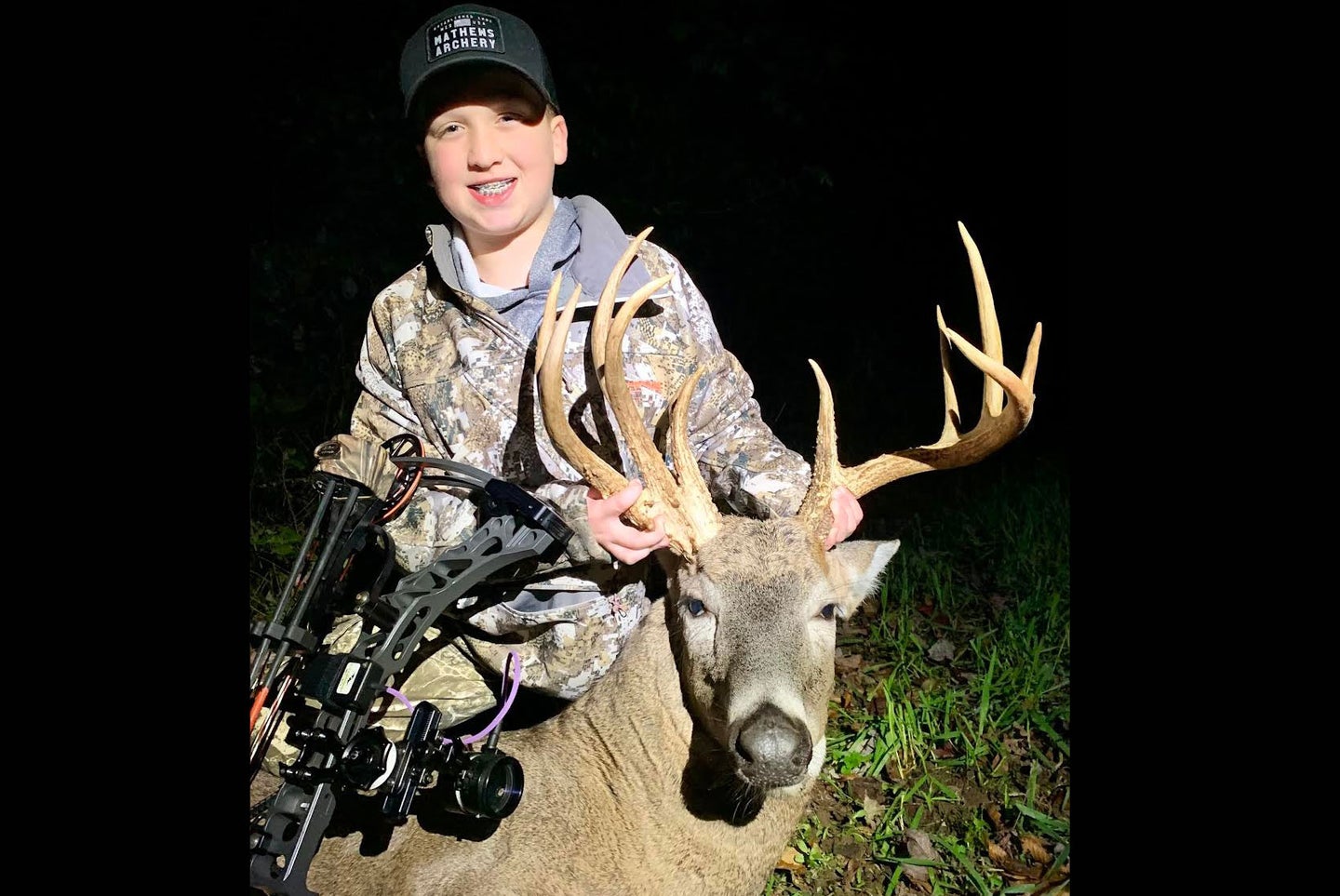 Scott Branden bought a 61-acre property five years ago in Hocking County, Ohio as a family hunting property. Scott’s son Avery has taken to the farm well and has hunted it since age 6, collecting squirrels, turkeys, and deer from the place over those years. He’s tagged three bucks so far, including a 138-inch, 8-pointer taken with a muzzleloader. But none are more memorable than the giant 12-pointer he tagged this season.

“When we got the place a lot of it had been timber clear-cut, but much of that has grown up now to 15-foot-high thick cover that deer love for bedding and browse,” says Scott, 45, a Branch Manager for “Fifth Third Bank” in nearby Chillicothe, Ohio. “We’ve put in five food plots this year, with turnips, ‘Buck Forage Oats’ and clover, and the deer hit them hard.”

Even though Ohio allows crossbow hunting during the archery season, Avery has developed a passion for archery and he spent the summer getting ready for the season. He helped plant food plots and worked the family’s 61-acres. He also shot 3D target archery, even placing third in an IBO tournament this year.

The father-son team placed three cellular phone trail cameras around the property this summer and watched plenty of game on their land. They monitored a good number of bucks, and watched their antlers develop and grow through the velvet season.

New to the farm this summer was a stud buck that Avery wanted to hunt as his first bow buck.

“We never saw him until this year, he just showed up,” said Avery, a seventh grader.

The Branden’s hunted every weekend once the Ohio bow season opened Sept. 25. Most hunts were in the afternoons, depending on weather, schoolwork, and business.

“The first evening we sat in a stand, I passed a nice 8-pointer, and just at dark another big buck came out, but I wasn’t confident of the shot angle, and it was getting dark, so I didn’t try it,” said Avery.

On the afternoon of Oct. 22, 2021, they hunted a blind and Avery passed a very good 10-point at 18 yards. Later they checked images from their remote cameras and the big buck that Avery wanted had showed during that same afternoon but at a different stand.

The next day, Oct. 23, they moved to the stand where photos of the big buck were made the previous day, getting into the elevated enclosed blind at 4 p.m. Right away they started seeing deer. Plenty of does, a pair of 6-pointers showed, ultimately five different bucks were cruising around their blind.

Finally, at 6:40 p.m., the big buck made the scene. The buck arrived within minutes of when he was recorded by their remote cellular camera the previous day. The buck stepped out of a tangled bedding area jungle at 20 yards, worked a scrape, and Avery readied his Matthews 46-pound bow for a shot.

“He came to 18 yards, broadside, then turned to look away at some does in a field, so I drew my bow,” Avery says. “But he turned toward them just as I got drawn, so I couldn’t get a shot at his side. So I had to let down from full draw and wait for a better shot at his shoulder.”

Doing that quietly isn’t easy for even experienced bowhunters. But Avery did it silently, without spooking the buck. The deer did turn broadside again, offering a second perfect shot. Avery drew, released, and watched his 24-inch arrow bury deeply behind the buck’s shoulder.

“The buck jetted out of there and dashed into a thicket 50 yards away, then we lost sight of him,” Scott recalls.

The father and son knew it was a perfect shot and started celebrating in the blind. But a short rain shower suddenly hit, and they were nervous the blood trail to the buck would wash away. They waited 30 minutes, then slipped out of the blind and headed back to a cabin they own on the property. They had dinner and waited three hours for some friends to arrive and aid in the buck tracking job.

They went to the spot where the buck was hit, but there was no blood. They walked in the darkness to where they last saw the deer and found Avery’s arrow. From there the blood trail was easily followed to where they found the buck laying dead a short distance away just off a field edge. The buck had dropped within seconds of being struck.

“Everything worked great, and that buck is everything I could have wanted,” Avery said.

The heavy non-typical rack has 12 scorable points. While it’s not yet been green scored, and Scott is hesitant about making a prediction, he thinks it’ll measure about 148-inches.”