This huge buck was known only as Ghost 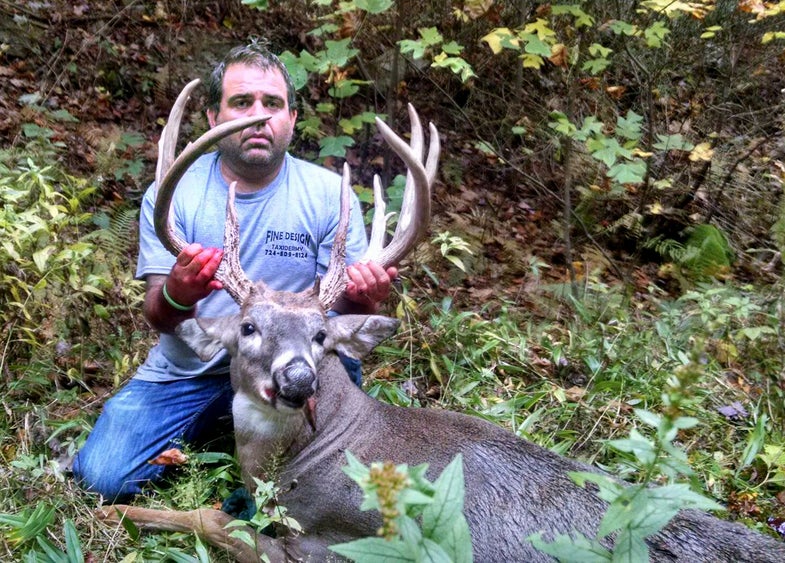 UPDATE: The Pennsylvania Game Commission will be scoring Lenzi’s buck via live stream at 9 a.m. EST on December 16, 2014 to determine its status as the new state record. Click here to watch.

Editor’s note: This story was originally published on November 19, 2014.

At least three big whitetails roamed the hardwoods this summer on a 90-acre property in Allegheny County, Pennsylvania. The landowner, Louis Cowger, named two of the bucks for their racks: Tall Tines and Bucket. The largest he dubbed Ghost. The buck would be seen on occasion, but then he was gone.

Donora taxidermist Jeff Lenzi received sole permission to hunt this farm. He’d heard tell of this “ghost” from Cowger, a customer of his, who first spotted the big bruiser at the end of the previous season. Summer game camera photos revealed the buck had survived the winter, but when Lenzi climbed into his ladder stand for the first time on the afternoon of October 10, Ghost hadn’t appeared on any trail cams in three weeks. 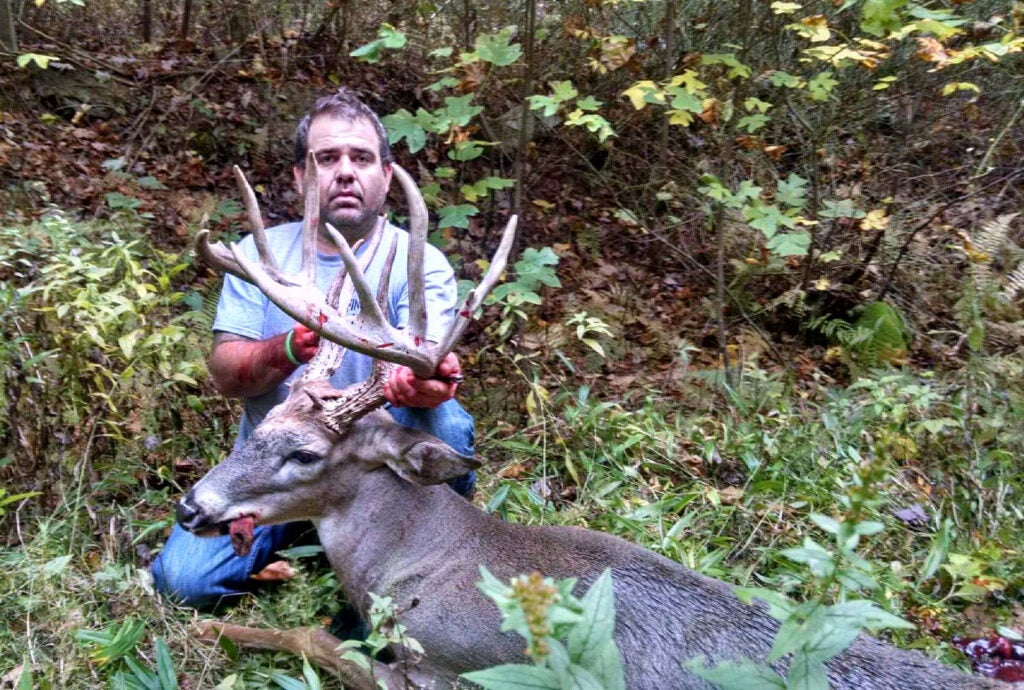 Still, Lenzi set up along a treeline early that afternoon, hopeful that Ghost was still in the area and simply skirting trail cams. Three mature bucks meandered past his ladder stand that evening, but he passed on each. There were bigger deer to be found.

Want to share your own buck story? Click here to check out our Deer of the Year program.

Years ago, Lenzi survived a bad car accident. The doctors said he would never walk again. Lenzi proved them wrong, but still sustained serious shoulder damage, which persisted even after nine surgeries. He handed off his compound bow to his son, secured a lifetime crossbow license, and switched to a TenPoint Defender.

A few minutes after 6 p.m., Ghost finally revealed himself. Lenzi was situated on the outside bend of the horseshoe-shaped field, and watched the buck approach along the curve to his right. The brute’s head seemed to wobble under the weight of his antlers as he stepped through the meadow.

“That was the first time I shook on a deer in about five years,” Lenzi said. But he calmed himself enough to hit the buck with his rangefinder—106 yards—and took a few deep breaths as the deer closed the distance. Just as the buck was about to enter the woods, he paused, quartering slightly away. Lenzi squeezed the trigger.

Sixty two yards away Ghost thudded to the ground, his chest barreling into the earth. Then, he jumped up and bounded away into the timber. Immediately Lenzi texted the landowner to tell him he’d arrowed the buck, but Cowger already knew. He was doing his evening chores nearby when the crossbow twanged, and looked up in time to spot the buck collapse.

Lenzi managed to sit tight for 45 minutes before descending the ladder to meet Cowger. A nearby game camera captured him spotting first blood and tracking the drops. There was plenty of blood to follow (Lenzi swears by his Rage broadheads) and they trailed it for 150 yards before they spotted Ghost piled up in the trees, 15 yards away. Lenzi shouted and moved in.

“I didn’t realize he was as big as he is until I got up on him,” Lenzi said. “There was no ground shrinkage—he got bigger as I got closer.”

It took four guys to retrieve the buck from the woods. Lenzi joked that people said he didn’t appear happy in his photos, but that they’d look just as beat if they’d dragged and dressed the 302-pound deer.

Lenzi preliminarily scored the antlers to determine a low-ball estimate of 190 inches. If the official score remains within a few inches, Lenzi’s buck will become the largest typical whitetail ever taken in the state.

The current archery state record on the Pennsylvania Game Commission books was also taken in Allegheny County. That 2004 typical buck scored 178 2/8 inches. The largest typical Boone and Crockett buck from Pennsylvania (harvested with any method) was taken in 1943 and measured 188 inches.

“I can’t even put my hand around the horns, it won’t close,” Lenzi said. After the rush of the season subsides, Lenzi plans to create the full body mount himself at his family-owned shop.

“It’s an excitement like you wouldn’t believe,” Lenzi said. “I’ve killed a lot of beautiful animals, but never a buck like this.”