This Mule Deer Has Cutaneous Fibromas, and It’s Freaking Out Residents in Colorado 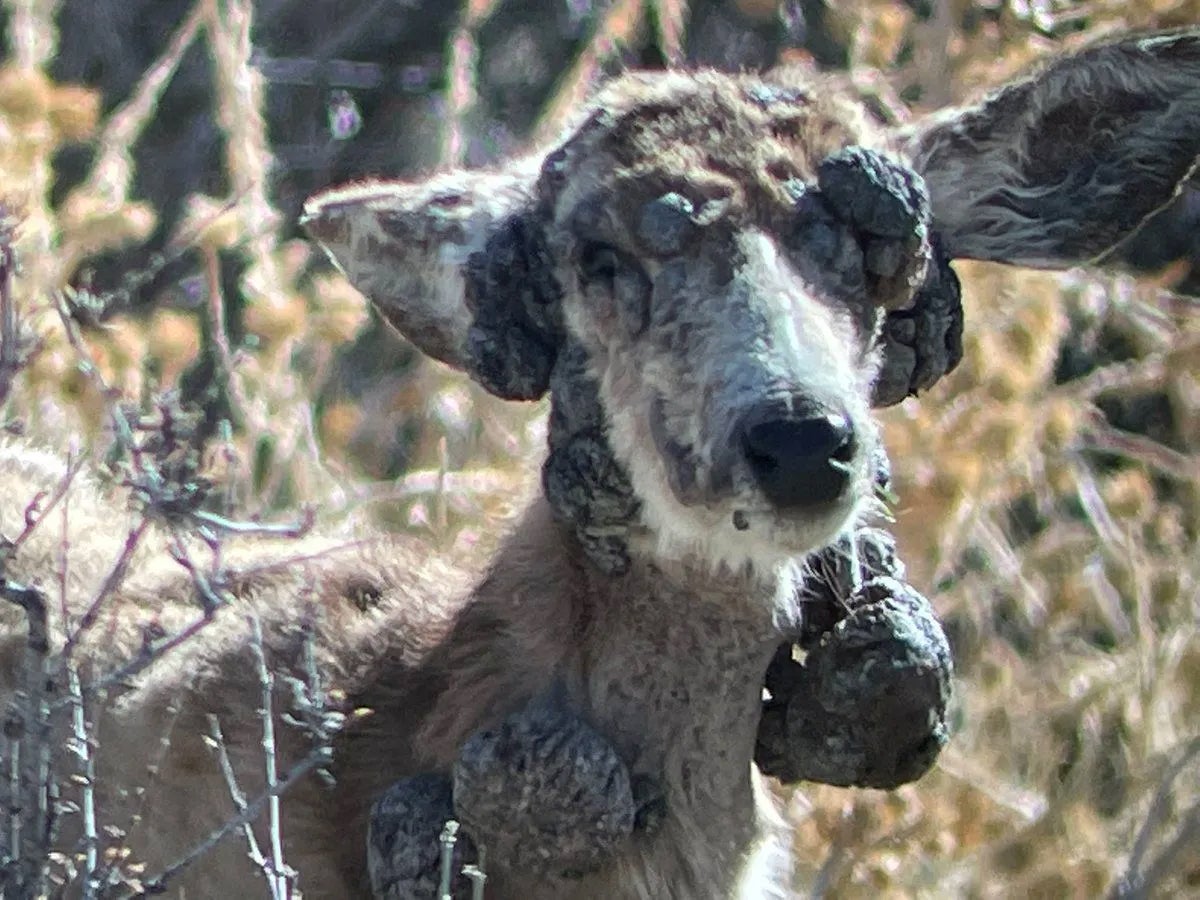 After fielding several calls from concerned residents who spotted an unusual mule deer in their area, Colorado Parks and Wildlife dispatched officers to investigate. Officials determined the lumpy deer is just suffering from a case of what hunters commonly call “deer warts.”

While this mule deer is experiencing a particularly drastic case of cutaneous fibromas (a technical term that translates to “benign skin tumors”) the wart-like lumps aren’t typically a threat to a deer’s health. The growths are caused by a virus, and while they’re “unsightly,” says CPW, most fibromas will eventually subside and heal completely. Once it recovers, the deer’s immune system should be resistant to any future infections from the virus.

“The deer is walking around fine, eating fresh green-up and acting like a deer,” the agency wrote in a Facebook post. “We are letting the deer be for now and will continue to monitor it.”

Officials will make sure the fibromas don’t hinder the deer’s mobility or prevent it from eating or drinking, which is standard protocol when they encounter deer in similar conditions.

What Is a Fibroma, Exactly?

Here’s a useful, if thoroughly gross, description of the bumps themselves. A few takeaways: the size and color of fibromas can vary, so one infected deer might look different from another deer infected with the same virus.

Fibromas are conspicuous, occur only on the skin, and can range in size from 10 to 100-plus milimeters in diameter, according to the Michigan Department of Natural Resources. “All are fleshy. Some are covered with gray or dark skin which often is scratched and bleeding. Others have a black, dry, hard surface that may be fissured much like the head of a cauliflower. The larger ones tend to be pendulous because of their weight and stem-like attachment to the skin.”

Fibromas can pop up anywhere a deer has skin, according to the Cornell Wildlife Health Lab, but they’re most common on the head and legs.

How Do Fibromas Spread in Wild Deer?

Fibromas in deer are caused by pox viruses and papilloma viruses. Although wildlife biologists don’t completely understand how these viruses are transmitted in wild deer, they do have a few hunches. Biting insects are one possible culprit, and so is contact of infected deer (or vegetation that deer has rubbed against) with the broken skin of a healthy deer. In experiments, fibromas were transmitted by rubbing infected tissue onto “the scratched skin of a susceptible deer.”

Experts also suspect bucks might spread the virus through fighting, since these growths are most common among bucks. A New York survey cited by multiple state game agencies found that the incidence of these growths are highest in younger deer (up to 2.5 years old) and five times more likely to occur in bucks than does. Michigan wildlife officials confirmed that reports in their state also suggest it’s primarily a disease that affects young male deer. Whitetails, mule deer, and moose are all susceptible.

Are We Sure Fibromas Don’t Bother Deer?

Most of the time, no—cutaneous fibromas don’t affect deer. In rare cases, the growths get so big that they can start to interfere with a deer’s ability to see, breath, eat, or drink. Sometimes (again, in rare cases) the growths can lead to a secondary bacterial infection. If there’s fluid on the bumps, says the Florida Fish and Wildlife Commission, that means they’ve become infected.

In short, no. The virus that causes fibromas in deer isn’t transmissible to humans or domestic animals. Other wildlife species, like rabbits and squirrels, are susceptible to different versions of the virus, and you’ll occasionally hear about outbreaks of squirrel pox.

“It’s [sic] main significance lies in the consternation and concern experienced by the hunter who shoots a deer covered with ugly-looking lumps. Though they don’t harm the meat, fibromas are repulsive to most persons and therefore render a fine trophy aesthetically undesirable.”

In other words, hunters get grossed out when it turns out the buck they just killed is covered in lumps. The idea of eating venison from a warty deer is also unappealing. But most of the time, it won’t actually cause you any problems. If you notice any sign of infection on the bumps (again, if there’s fluid present), then it’s not safe for human consumption, according to the National Deer Association.