Why I’m Selling My Antlers 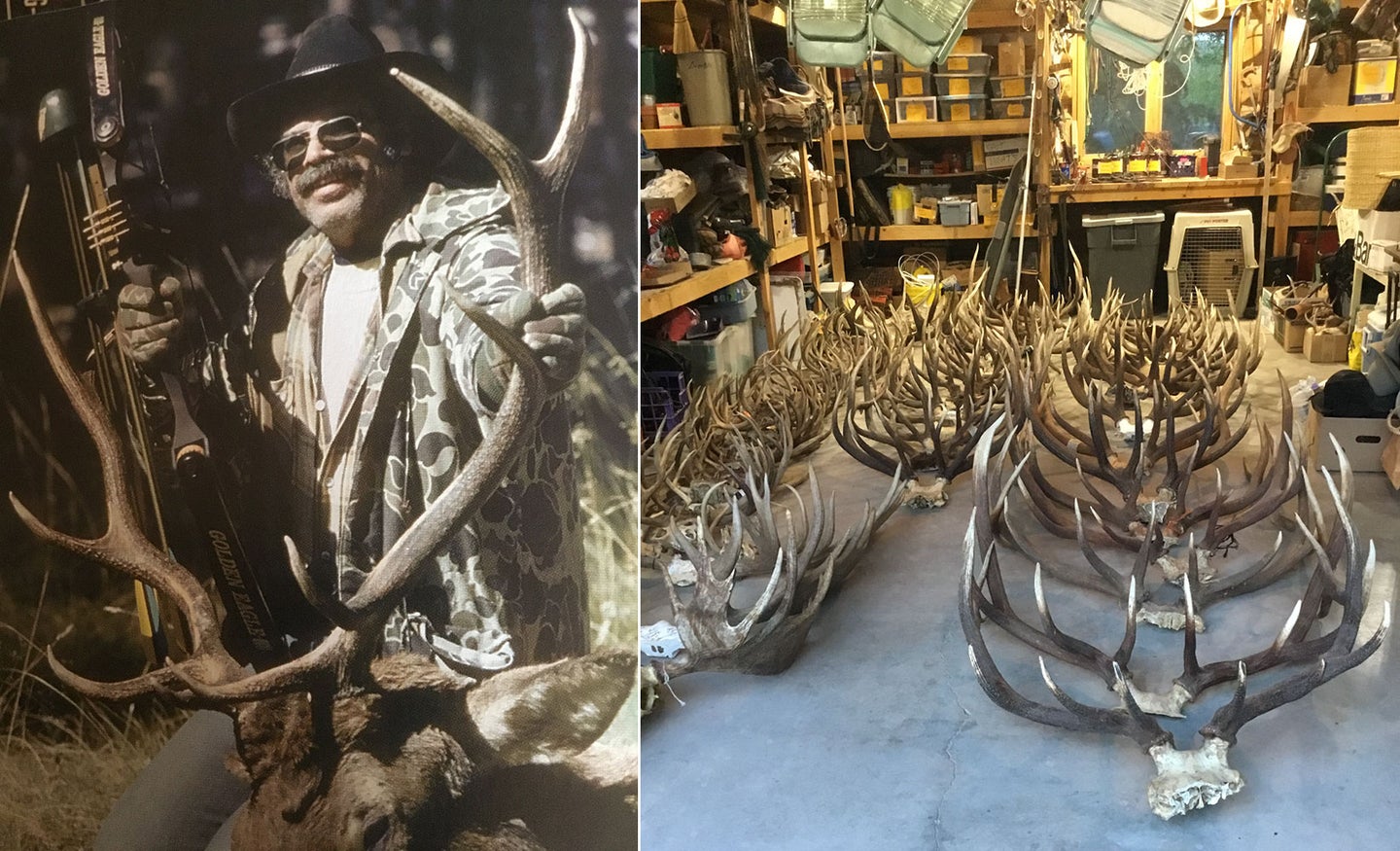 Jim Zumbo and a career's worth of big-game antlers. Jim Zumbo
SHARE

I had just finished dragging a mule deer to the road. It was a nice buck, not a huge trophy that would score well, but representative of a mature animal. His rack had a 24-inch outside spread and two high double forks on each side. To me he was a handsome buck, and I was pleased.

As I got ready to load the deer, a pickup rounded a bend and stopped. The hunters inside asked if I needed help loading the buck. I accepted their offer, and we lifted the buck into my truck bed. But one of the hunters had a puzzled look on his face.

“Why did you shoot that buck?” he asked. “There are lots bigger around here.”

That caught me by surprise. “I like him,” I said. “That’s all that matters.”

“Different strokes for different folks, I guess,” he responded. Then they drove away.

Now, toward the end of my hunting career, I’ve been thinking about this hunt and many others. I’ve decided to sell off most of the antlers I’ve amassed through the years, and sifting through them brings back plenty of memories. Such an act might sound like heresy to a young big-game hunter who treasures every inch of every rack they collect. But like so many other things, the value of a rack changes over time.

The Meaning of an Antler

Antlers evoke all sorts of reactions. Most of us who hunt hope to see the biggest set of antlers in the woods, whether it’s a deer, elk, moose, or any other critter that grows “bone” on its head. That’s our nature.

In my case, I’ve never considered myself a serious trophy hunter. If I see a representative animal (one that’s of average size for the area) I’m apt to shoot unless I happen to be in a place where expectations of seeing a trophy are high. Take a deer hunt in Kansas, for example. I was in a region inhabited by very big whitetails. I passed on a dozen average-sized bucks and never pulled the trigger. I thoroughly enjoyed that hunt, even though I went home empty.

On the flipside, there’s the DIY elk hunt in Colorado where I drew a tag with 23 preference points. It was a public-land hunt and I passed many decent bulls, hoping for the bull of my life. It didn’t happen so I lowered the boom on a nice six-point bull even though I still had a couple days to hunt.

Bringing home meat was important to me. Instead of flying to a hunting area I’ve driven my pickup on many hunts with the express purpose of getting as much meat home as possible. Once, when I hunted muskox and caribou above the Arctic Circle and I drove to the farthest major airport in Canada’s north country so the meat would have a better chance of not getting lost or ending up at the wrong airport.

My job as hunting editor of Outdoor Life required me to go on several hunts a year, so I’d have enough material for my column and features. I went on an odyssey to hunt deer in all 50 states, and I also hosted a TV show. When I was successful, I’d have another set of antlers.

My attraction to antlers began long before I started hunting. I was raised in a city in upstate New York. As a young child, I’d never seen a deer. In those days whitetail populations were low and seeing a deer was a big deal. When I was seven, our family visited my uncle’s property, much of it overgrown with brush and apple trees. Suddenly a deer exploded from the underbrush 20 yards away. Startled, I spotted a buck bounding off, it’s white tail bobbing every which way. To me those antlers looked huge, but the adults with me said he was a six-pointer. I didn’t know what that meant.

Nowadays many kids begin hunting at very young ages. Back in the ’50s, I didn’t start deer hunting until I was in high school. There were no treestands, trail cams, food plots, or any other modern practices that helped us find our quarry. Scrapes and rubs had no significance; biologists hadn’t yet figured out their meaning. Our idea of hunting was to stumble around in the woods and occasionally lean against a tree for awhile. Our efforts were rewarded with white tails bouncing through the forest. Doe hunting was forbidden. The lack of deer didn’t help. If someone saw a six point or better it was cause for celebration. If a hunter killed any buck, even a barely-legal spike, he was deemed a neighborhood hero.

Eventually, my luck changed and I began bagging deer, whitetails in New York and then mule deer when I moved to Utah to attend forestry college. The banner days of mule deer hunting yielded big bucks everywhere in the West. I got in on the bonanza and added more antlers to my collection.

The bucks that offered the greatest challenges evoke the most memories. I’d often have a mediocre buck mounted because of the unique circumstances when I killed it. Elk that I’d taken on DIY hunts with the woods full of hunters were considered trophies in my mind even though they were only raghorns. The only bull I took with a bow was a profoundly memorable trophy.

I don’t have a large trophy room at home. Instead, I hung mounts wherever I could find space in the house. Eventually I ran out of space and began storing antlers in the attic. The pile grew each year. In a typical hunting season, I’d go on eight to 10 (or more) hunts. I wasn’t successful on all, of course, but I continued to add to the pile.

By the time I reached Social Security eligibility, I slowed down on my writing as well as my hunting. The physical demands of hiking in the mountains were taking a toll. Hunting the high country was my passion and I soon found the slopes to be getting steeper each year. The antler pile in the attic was quite large at this point. Because of a bum foot, I had difficulty climbing the ladder into the attic. My wife could negotiate it, but I quit going up there for good. The antlers were out of sight and out of mind. I hadn’t seen them for a couple years.

When I began downsizing my stuff, I was reluctant to get rid of the antlers. They were a big part of my life. But in reality, they no longer conjured memories while hiding in the attic. I could have ignored them and let my family deal with them when I was gone, but that would have been a hassle for everyone. They will have plenty of other things to deal with.

Finally, after much agonizing, I decided to sell the collection. I could have sold them all to antler buyers who are currently paying the highest rates per pound ever. Typically, they buy sheds so I’d have to saw each antler off the skull. When I learned that most antlers nowadays are cut into small pieces and packaged for doggie chews, I decided I wasn’t interested in my antlers being chopped up. I’d sell them on the skulls, or not at all.

With the antlers removed from the attic and nicely arranged on the garage floor I began to recognize some of the racks and details from some of the hunts came surging back, even though several had been taken 40 years or more ago.

For example, there was the 55-inch moose I’d taken in northern BC during a blizzard. My guide and I watched him bed in a spruce thicket and set up an ambush when another guide rode his horse in the undergrowth and flushed him out. And the pair of whitetail racks, still tied together with string, from a hunt on Anticosti Island off the Quebec coast. Then I spotted a big muley buck I’d killed in Colorado after accumulating 13 preference points. More memories flooded back when I spotted the 4-by-5 elk I’d taken with a bow while hunting with the late Billy Stockton. And there was the beautiful 6-by-6 bull I’d taken deep in the Selway wilderness with my good buddy, the late Jack Wemple.

As I began to sell antlers, my emotions bounced back and forth between profound disappointment that I’d never see them again and satisfaction of knowing they’d be at least hang on someone’s wall.

In some ways, selling those antlers helped me close one of the chapters on my book of hunting memories. On the bright side, I still have plenty of mounts on the walls to remind me of those wonderful years when I could meet the challenges of mountain country. Those remain some of my fondest memories.